Brett Bawcum is no stranger to planning. As director of athletic bands, his preparation begins 10 months ahead of the next fall season. When COVID-19 hit, planning took on a whole new challenge: a heavy dose of unpredictability. “We were already looking at second and third shows when it started becoming clear last spring that this was not going to be a ‘normal’ year,” said Bawcum. Whether or not the band would even be able to attend games was up in the air until Aug. 28, only 39 days before the season opener. 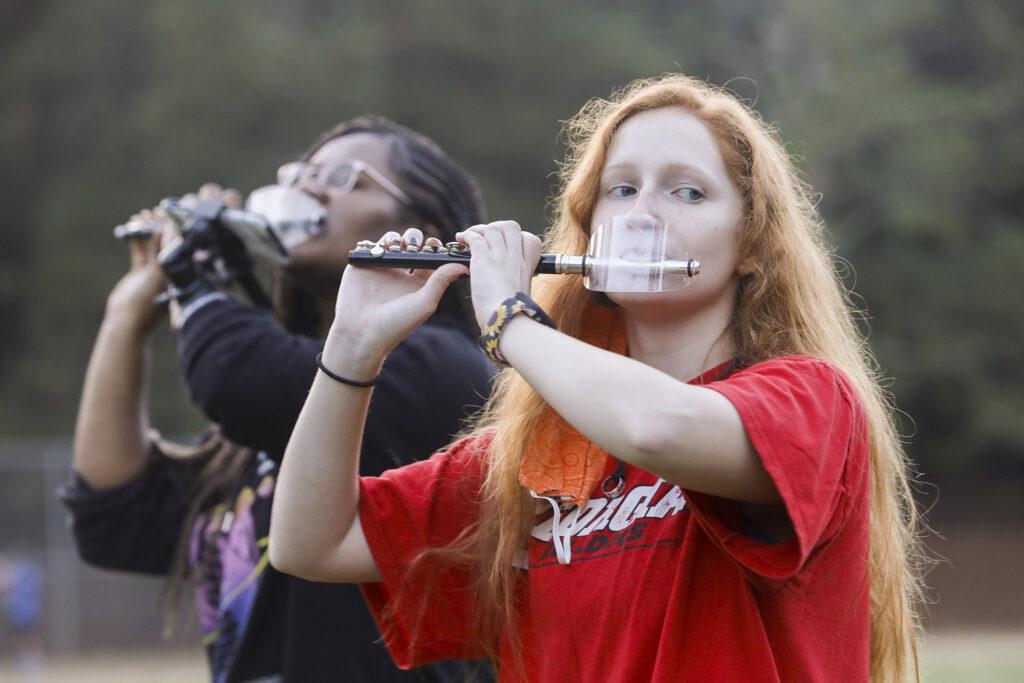 Piccolo players practice with extra precautions during the pandemic. (Photo by Dorothy Kozlowski/UGA)

A smaller number of fans in the stadium combined with canceled performances meant the Redcoat Band (RCB) would need to make changes this year. To say it was challenging to take a 430-person organization and condense it down to a manageable number, able to play and practice safely throughout the pandemic, would be an understatement. RCB leadership took the findings from music-specific aerosol studies as well as CDC guidelines into consideration when planning how to hold in-person rehearsals and game day performances.

“At rehearsals, we are doing everything in our power to keep the risk of transmission as close to zero as possible,” said junior Music Education major and clarinet player Hannah Hankins. She said participating this year has a lot of challenges, but she still found it rewarding. Only about 125 band members were selected to attend each of the four home games, which means most members will only get to play in one game. 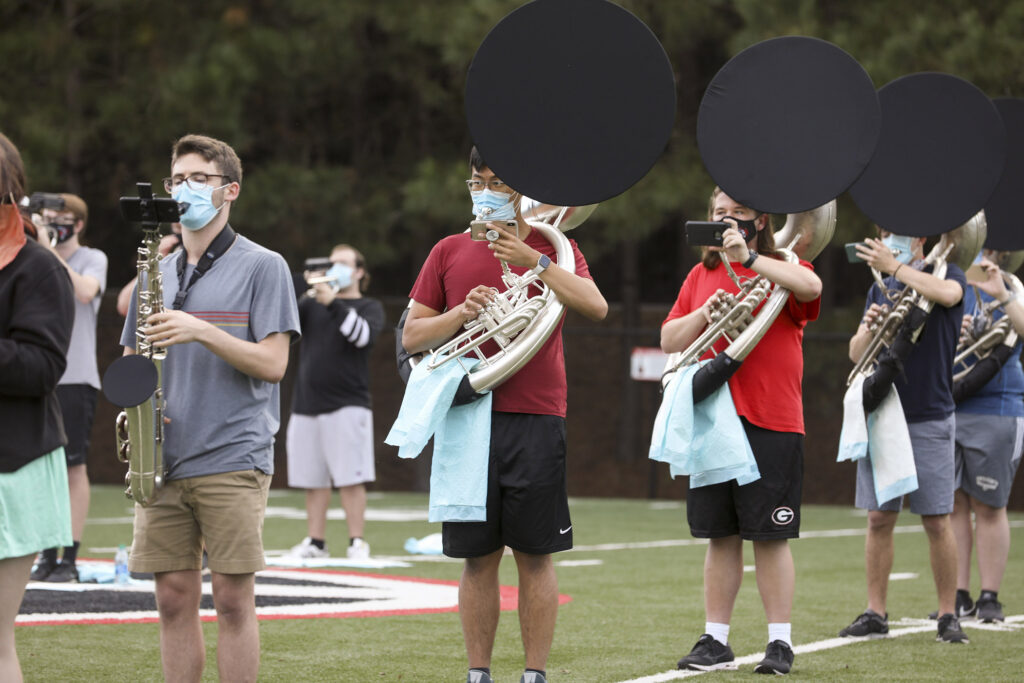 Tuba players with covered bells practice during the pandemic. (Photo by Dorothy Kozlowski/UGA)

At all rehearsals and games, players wear masks, maintain a 7.5-foot distance, place bell covers on instruments and limit the number of Redcoats at each rehearsal and game. “Even though this season has been weird and disappointing in some respects, I am still so thankful to get to be a part of something at a time when we are so isolated because of the pandemic,” said Hankins. Another big change this season was eliminating travel to away games, a conference-wide restriction. While it technically did not apply to the Georgia-Florida game, Bawcum decided the risk associated with bus travel would not be worth taking, making it the first Florida game the Redcoats have missed since at least the mid-20th century.

“Being in Redcoats this year has not been what I expected. … Luckily, proactiveness from directors and students, as well as careful planning allowed for an experience more rewarding than what I was expecting,” said senior music education major Karena Washington. Washington also serves on the Redcoat Band Executive Board helping first-year players. She said the biggest challenge was leading students in learning music and teaching them other RCB traditions via Zoom. “However, Zoom allowed us a time to mingle and celebrate doing marching band when we did not expect to be able to do so just a month before,” said Washington. 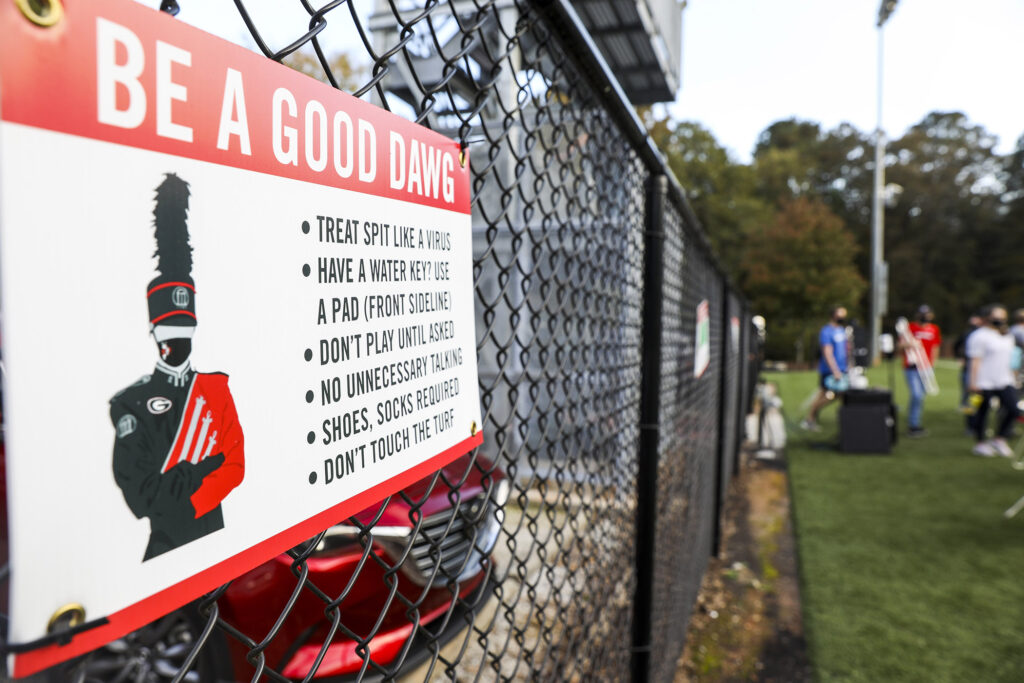 COVID-19 guidelines for the marching band. (Photo by Dorothy Kozlowski/UGA)

Since this was her last year in the Redcoats, Washington was disappointed not to be able to march and participate in the DawgWalk, the traditional pre-game concert centered around the team’s arrival at the stadium. An ever-positive person, she also added that she was glad to have “more space in the stands.”

Another thing different this year was the uniforms. Bawcum said the impracticality of distributing, altering and collecting the marching band uniforms without contact, plus dry-cleaning all of them, would be too much, considering the minimal use they would get. Before the pandemic hit, RCB leadership had already planned for a new summer uniform of a golf shirt and black shorts. This was a good starting point for a pandemic uniform, and Bawcum said the new clothes will help create a historical record. “Old Redcoat photos can be dated by the style of the uniform, and you can draw conclusions about the state of the band—the way things were done during that era—based on those photos. When someone looks at the (few) photos from 2020, I want them to wonder why we’re wearing something different,” said Bawcum. 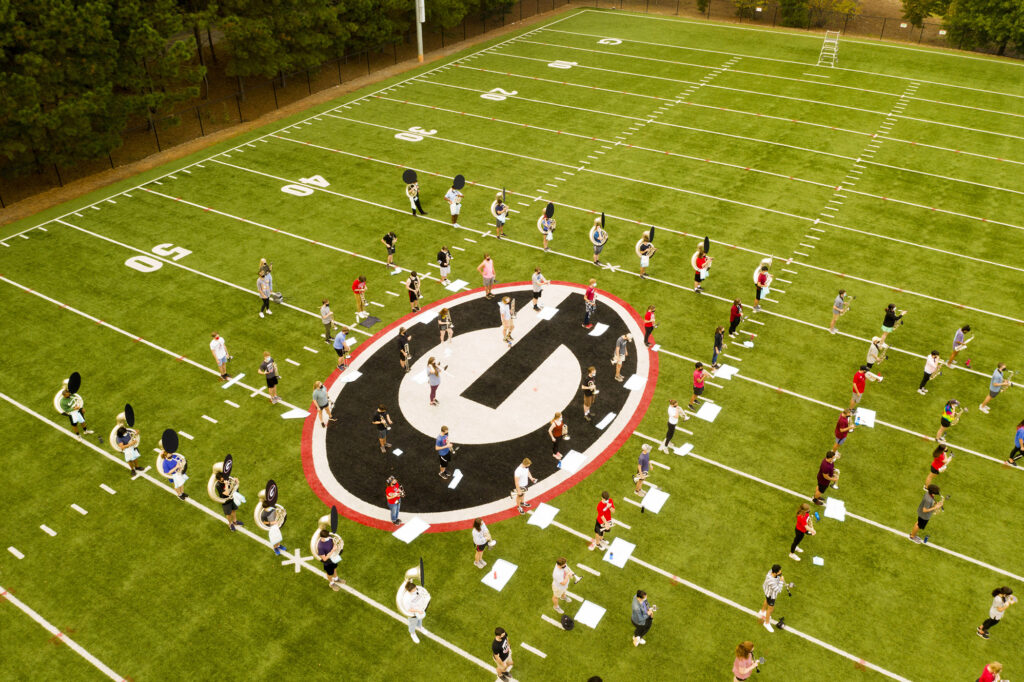 Bawcum said the RCB members have all been really good sports. They want to march and contribute to campus life. They want to be around each other. “But they also want to be good citizens, and the last thing they would do is put the community at risk by insisting on business as usual. They have been very patient and understanding with me while I have tried to figure out how to navigate this time,” said Bawcum.

“A crowd of 20,000 doesn’t sound that different than one of 90,000. But that missing part—be it the three quarters of the band or of the crowd that’s not physically there—matters an awful lot. It isn’t the same; it’s a version of something we love. It’s better than the emptiness of the past summer, but it is no substitute for the real thing,” said Bawcum. 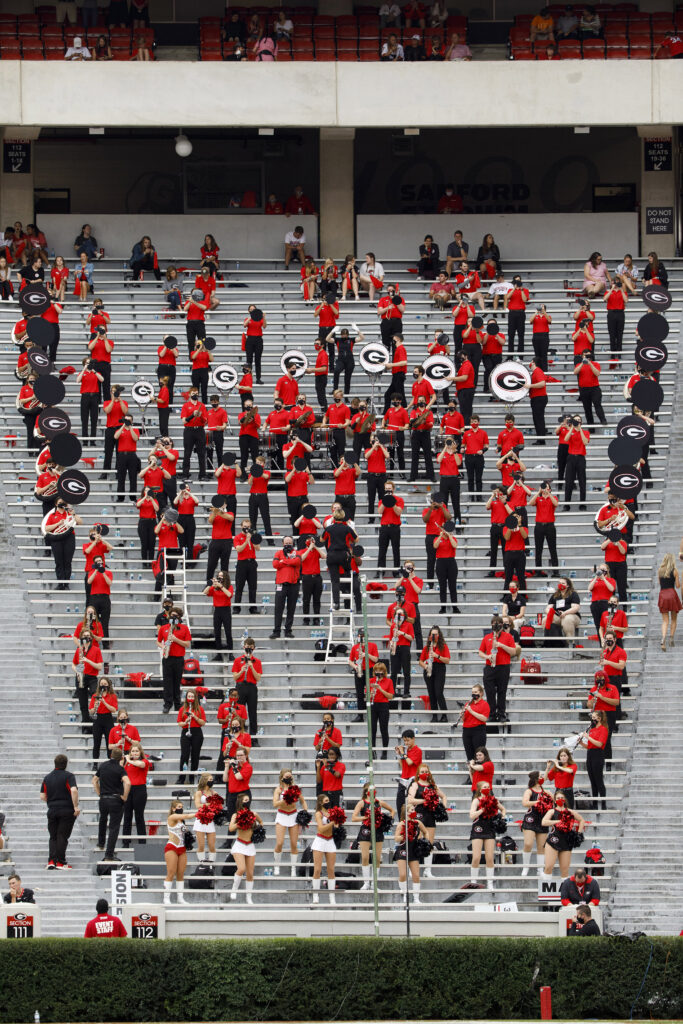 Members of the Redcoat Marching Band perform in the stands during the home football game against Tennessee. The band could only play in the stands, had to wear face coverings, played with less members, and had to maintain social distancing during the COVID-19 pandemic. (Photo by Andrew Davis Tucker/UGA)

“I have known for a long time that I’m fortunate to work with the students in the Redcoat Band,” he said. “But this season has made it more evident than before. No one loves Georgia more than they do.”