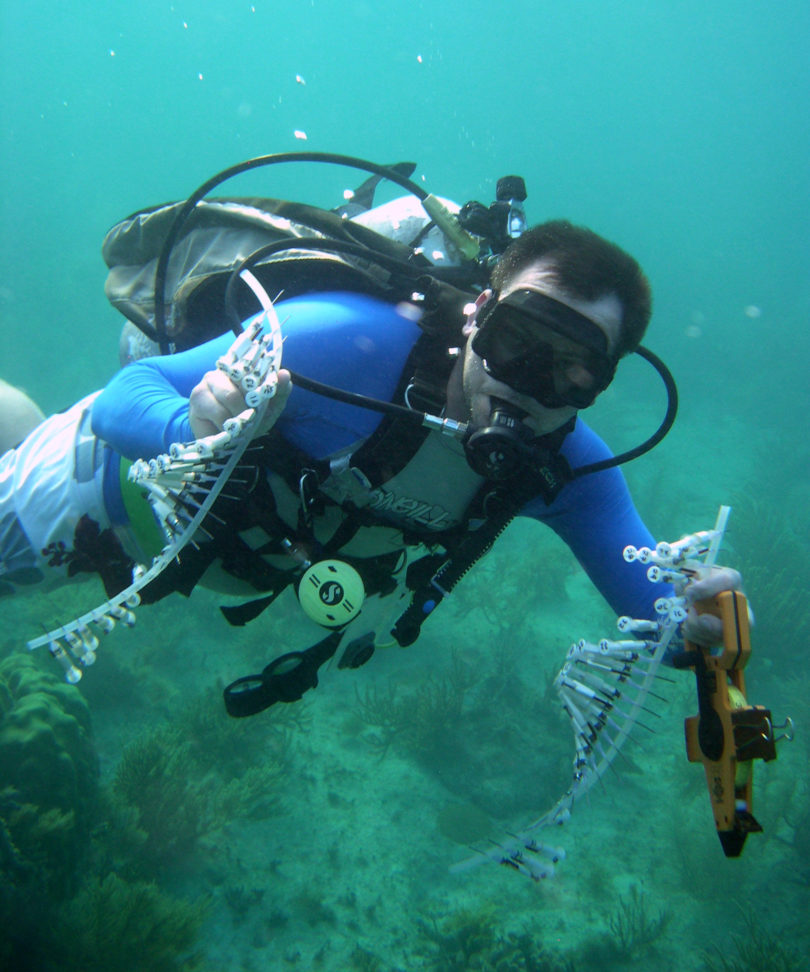 Athens, Ga. – Continued University of Georgia research on the threatened Caribbean reef-building coral, Orbicella faveolata, finds that latitudinal patterns play a key role in the type of symbiotic algae that the coral associates with.

The findings, recently published in the journal Coral Reefs, may have implications for future management practices in the face of increasing environmental stressors.

Reef-building corals harbor tiny plantlike algae inside of their bodies. These symbiotic algae gather energy from the sun and manufacture sugars that feed the coral, enabling coral reefs to grow and thrive in nutrient-poor waters.

Orbicella faveolata, also known as mountainous star coral, is a common, but increasingly threatened, species of reef-building coral that is widely distributed throughout the Caribbean.

Like most reef corals, Orbicella faveolata forms a symbiosis with algae; however, what makes this species of coral so unusual is its association with multiple types of photosynthetic symbiotic algae, depending on where it lives.

This study found the diversity of symbiotic algae that interact with the mountainous star coral is geographically specific. This means that the corals found in Florida have different species of algae than the corals in Belize, Mexico and the Bahamas, according to Dustin Kemp, a postdoctoral research associate in the UGA Odum School of Ecology who led the study.

Kemp took multiple within-coral colony samples from different geographic regions to get a fine-scale understanding of the variation of symbiotic algae that exists on them.

“We think that local environmental conditions are predictive of which species of coral and their algae that we will find in a particular region,” said Daniel Thornhill, an affiliated faculty member at Auburn University and a UGA alumnus, who co-authored the study.

“Environmental conditions are relevant because specific host-symbiont combinations depend on where the coral lives. These symbioses are the result of long-term ecological and evolutionary processes,” Kemp said.

“If you go into the tropics—Mexico and Belize—there may be several species of algae within one coral, but if you’re in a subtropical area—Florida Keys—there are far fewer,” Thornhill said.

Study authors found that, depending on the species of algae and the water temperature where the coral lives, some are more susceptible to climate change and other environmental threats. The coral reef’s latitudinal patterns uncovered in this research explain their algae association, which determines their susceptibility.

“This suggests that different corals may be affected differently by climate change. Understanding coral-algal symbiosis is an important piece of the puzzle for understanding the broad reaching effects that climate change has on coral reef ecosystems,” Kemp said. “Some types (of symbiotic algae) are more susceptible to thermal stressors, making the coral more susceptible to coral bleaching, a stress response of turning white due to the loss of symbiotic algae.”

Thornhill added, “Coral reef managers should consider how these corals might respond to climate change. I think regionally specific types of management would be appropriate.”