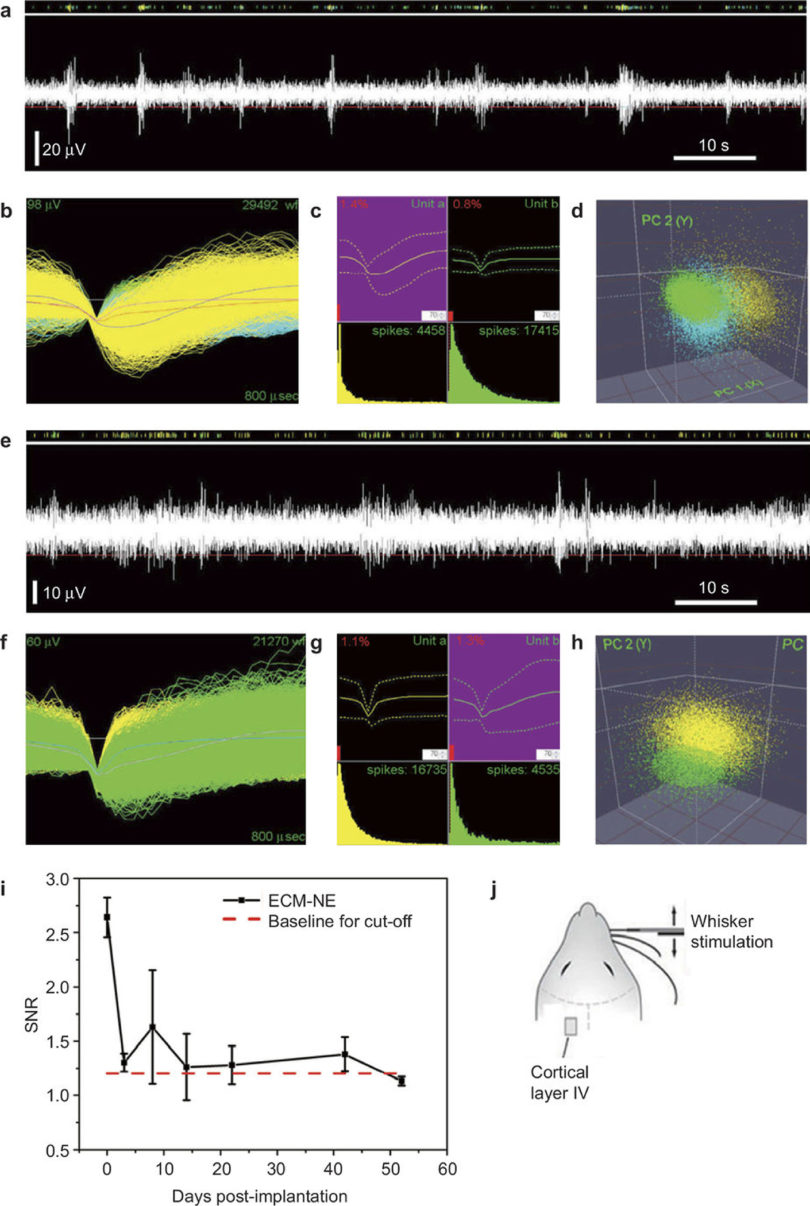 Evoked neuronal signals in response to whisker stimulation were recorded using ECM electrode implants in the rat barrel cortex. Initial extended-time neural recording studies suggest that the electrodes maintained their recording capability over a five-week time period and were stable over four weeks after implantation.

Instead of using neural prosthetic devices—which suffer from immune-system rejection and are believed to fail due to a material and mechanical mismatch—a multi-institutional team, including Lohitash Karumbaiah of the University of Georgia’s Regenerative Bioscience Center, has developed a brain-friendly extracellular matrix environment of neuronal cells that contain very little foreign material. These by-design electrodes are shielded by a covering that the brain recognizes as part of its own composition.

Although once believed to be devoid of immune cells and therefore of immune responses, the brain is now recognized to have its own immune system that protects it against foreign invaders.

“This is not by any means the device that you’re going to implant into a patient,” said Karumbaiah, an assistant professor of animal and dairy science in the UGA College of Agricultural and Environmental Sciences. “This is proof of concept that extracellular matrix can be used to ensheathe a functioning electrode without the use of any other foreign or synthetic materials.”

Implantable neural prosthetic devices in the brain have been around for almost two decades, helping people living with limb loss and spinal cord injury become more independent. However, not only do neural prosthetic devices suffer from immune-system rejection, but most are believed to eventually fail because of a mismatch between the soft brain tissue and the rigid devices.

The collaboration, led by Wen Shen and Mark Allen of the University of Pennsylvania, found that the extracellular matrix derived electrodes adapted to the mechanical properties of brain tissue and were capable of acquiring neural recordings from the brain cortex.

“Neural interface technology is literally mind boggling, considering that one might someday control a prosthetic limb with one’s own thoughts,” Karumbaiah said.

The study’s joint collaborators were Ravi Bellamkonda, who conceived the new approach and is chair of the Wallace H. Coulter Department of Biomedical Engineering at the Georgia Institute of Technology and Emory University, as well as Allen, who at the time was director of the Institute for Electronics and Nanotechnology.

“Hopefully, once we converge upon the nanofabrication techniques that would enable these to be clinically translational, this same methodology could then be applied in getting these extracellular matrix derived electrodes to be the next wave of brain implants,” Karumbaiah said.

Currently, one out of every 190 Americans is living with limb loss, according to the National Institutes of Health. There is a significant burden in cost of care and quality of life for people suffering from this disability.

The research team is one part of many in the prosthesis industry, which includes those who design the robotics for the artificial limbs, others who make the neural prosthetic devices and developers who design the software that decodes the neural signal.

“What neural prosthetic devices do is communicate seamlessly to an external prosthesis,” Karumbaiah said, “providing independence of function without having to have a person or a facility dedicated to their care.”

Karumbaiah hopes further collaboration will allow them to make positive changes in the industry, saying that, “it’s the researcher-to-industry kind of conversation that now needs to take place, where companies need to come in and ask: ‘What have you learned? How are the devices deficient, and how can we make them better?'”

The study, “Extracellular matrix-based intracortical microelectrodes: Toward a microfabricated neural interface based on natural materials,” is available at www.nature.com/articles/micronano201510.

Regenerative Bioscience Center
The Regenerative Bioscience Center at the University of Georgia links researchers and resources collaborating in a wide range of disciplines to develop new cures for the devastating diseases. With its potential restorative powers, regenerative medicine could offer new ways of treating diseases for which there are currently no treatments-including heart disease, Parkinson’s, Alzheimer’s and stroke. The RBC is a collaboration geared toward identifying regenerative solutions for numerous medical conditions that affect both animals and people. For more information, see www.rbc.uga.edu.