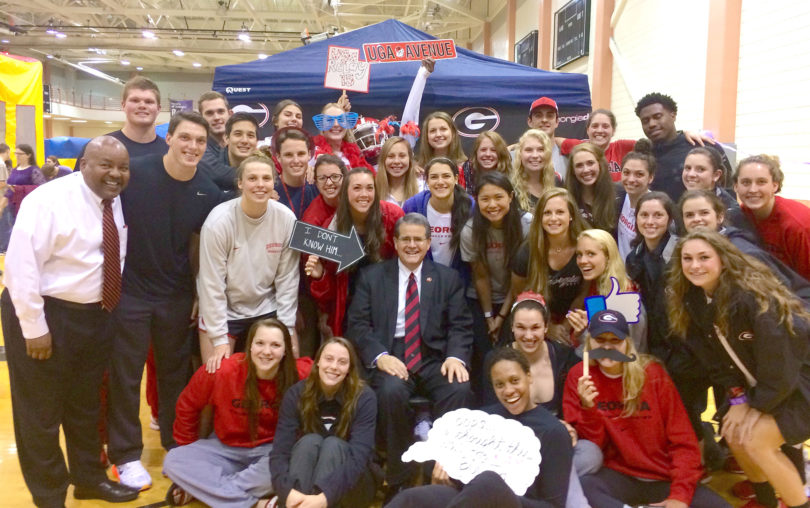 Athens, Ga. – More than 2,000 students participated in the 16th Annual University of Georgia Relay for Life overnight from April 17-18 in the main gym at the Ramsey Student Center. The night culminated with the announcement that the student fundraising teams had raised a total of $203,396.31 toward this year’s campaign. The top fundraising team was Alpha Chi Omega, which raised $16,130.

The UGA event is notable for being Relay for Life’s first event organized by, led by and composed entirely of college students. The student group, led this year by senior Savannah Grow, is an affiliate of Relay for Life that is registered with UGA Student Affairs’ Center for Student Organizations. The university’s intramural fields traditionally play host to the event, but for the third year in a row, rain forced the event indoors.

UGA Relay has raised more than $3 million for the American Cancer society since the first relay in 1999 and annually ranks as one of the top collegiate relays in the nation.

“It’s wonderful to witness the passion and effort of UGA’s students, especially with philanthropy,” said Victor K. Wilson, UGA vice president for student affairs. “At relay, students from across campus come together to make a real difference in our community. It’s truly inspiring.”

Relay for Life is a national nonprofit organization benefiting the American Cancer Society. Local events are held at schools and in communities across the country each spring. Participants walk around tracks, play games, enjoy music and food, and recognize and celebrate individuals and families touched by cancer.

Notable features of most Relay for Life events are a Survivors Lap in which survivors celebrate their victories over cancer while participants congratulate them; a Luminaria Ceremony where candles are lit in honor of those lost to cancer and in support of individuals whose fights continue; and a Fight Back Ceremony which inspires participants to take action.

This year’s relay featured several new events. One was a one-hour challenge with the University of South Carolina, which held its relay at the same time as UGA. Each school raised nearly $2,000, with the results so close that the schools agreed to call it a draw.

Perhaps the most notable update was a change in how the fundraising total was revealed. Typically, students and survivors gather on stage with large poster boards that have numbers on the back. They would then turn the posters around to reveal the final dollar amount. This year, instead of numbers, pictures of loved ones who had battled or are battling cancer were displayed.

“Relay for Life is about so much more than the number of dollars raised,” said Blayne McDonald, a member of the relay executive team. “This year, we wanted to focus on the mission. It’s about who we relay for, and the impact we can make for them.”

McDonald initially joined Relay for Life to support a worthy cause, but her motivation hit closer to home this past June.

“We learned my grandfather was diagnosed with pancreatic cancer, and he passed only a month later,” McDonald said. “I not only relay for him, but for every single person I met over the year who has been affected by cancer. These wonderful people, especially the survivors, inspire me to do more.”

UGA Student Affairs
The Division of Student Affairs comprises 19 campus departments that enhance the learning environment for students at the University of Georgia by stimulating the learning process, integrating the in-class and out-of-class experiences, promoting an environment conducive to growth and discovery and facilitating intellectual, spiritual, social, occupational, physical, cultural and emotional development. For more information, see studentaffairs.uga.edu.