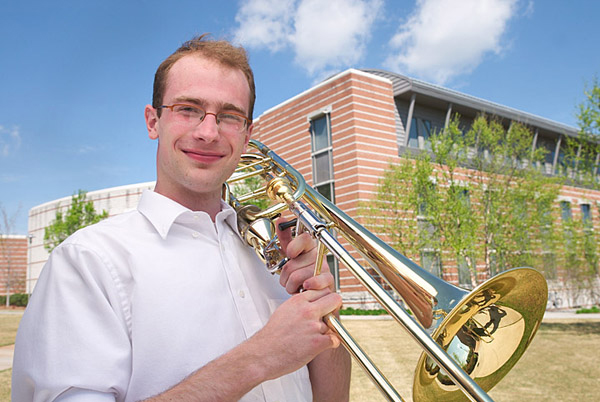 Senior Charles Reneau has performed often with the Atlanta Symphony Orchestra and the Alabama Symphony Orchestra, as well as the regional orchestras of Macon, Augusta, Huntsville and Chattanooga. He was a substitute bass trombonist with the Israel Philharmonic Orchestra on their North America tour last year and played in Carnegie Hall. He is a two-time winner of the U.S. Army Band’s National Solo Competition and was selected to be a Yamaha Young Performing Artist in 2003.

Bachelor of Music in Trombone Performance

Besides the above, I have toured with the American Wind Symphony Orchestra and performed with the Brevard Music Center’s Festival Orchestra. As a soloist, I performed with the UGA Wind Ensemble and the Georgia Brass, as well as with trombone choirs in New York and North Carolina. This past summer, I performed as a participant and soloist in the 2003 Trombone Seminar led by Joseph Alessi, principal trombonist of the New York Philharmonic. I am a recipient of the Presser Foundation Award, UGA Charter Scholarship, Franklin College Scholarship, and the Steve Norrell Scholarship, and I am a member of Pi Kappa Lambda.

I gig all around the Southeast, and I also have a part-time job at the School of Music as a librarian for the brass ensembles at UGA.

I chose to attend UGA because…

…my grandfather, Dr. James Dooley, used to teach in the School of Music, and my aunt, Claire Dooley, came to UGA as a music major. That family connection made me aware of UGA, but really I came to study here because of the reputation of the music school faculty.

My favorite things to do on campus are…

…play trombone in the parking lot behind the music building and in the Terry Tunes programs, walk in the Founder’s Garden, sit by the pond at the Ecology building, people-watch at the SLC, go to concerts and recitals, and get lost in the shelves of the Main Library.

…driving on dirt roads, hiking in North Carolina, playing trombone with friends in Atlanta, and photographing people. I’m an amateur photographer in the best sense. I really love it, and I don’t care whether my photos look good to anyone besides me!

My favorite professor is…

…Dr. Philip Jameson. He is my trombone teacher at UGA, and he has become my mentor. He has molded the shape of both my playing style and my career. I have been fortunate to study with some of the very best artists on my instrument, and I’ve never had a teacher as intelligent and influential as Dr. Jameson. I fully expect that no teacher I ever have will surpass him in pedagogical excellence.

If money was not a consideration, I would love to…

…go on a hiking and driving tour of the high plains—Nebraska and South Dakota—and the Rockies—Wyoming and Montana. I would like to visit all the Indian reservations out there and study Native American music. I used to be in a Lakota drum group in Sioux City and that experience was highly valuable. I was the only white person, so they called me “Custer.”

After graduation, I plan to…

…play in an orchestra in Breckenridge, Colorado for a couple of months this summer, then I am moving to New York City to get a Master’s degree in trombone performance from the Juilliard School.