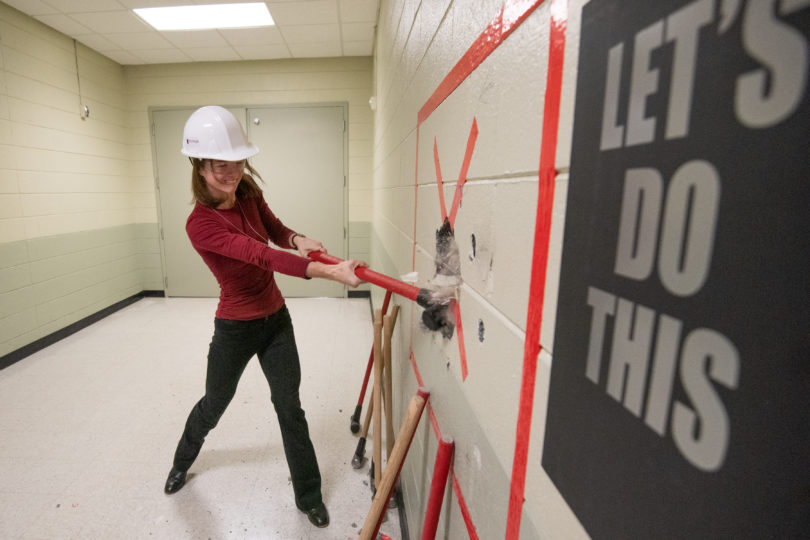 Madison Smith, an environmental engineering student, takes a sledgehammer to a wall in the Driftmier Engineering Center during a ceremony Dec. 13 to kick off the renovation of the building.

The University of Georgia College of Engineering launched a major renovation of the Driftmier Engineering Center on Thursday, Dec. 13.

Scheduled to open in fall 2019, the first phase of the project will significantly expand and enhance the College of Engineering’s undergraduate teaching laboratories and classrooms. The new space is designed to promote project-based learning and teamwork.

“In the six years since the College of Engineering was formed at UGA, enrollment in engineering has grown exponentially, we’ve added more than 30 new faculty members, and we’ve significantly expanded the breadth of our research activities,” said Dean Donald Leo. “All of these changes mean we must examine our facilities and plan effectively for the future.”

The project will convert more than 13,000 square feet of the building’s existing footprint into state-of-the-art instructional space. The majority of the new space will be assigned to modern wet and dry instructional labs designed to support the college’s undergraduate and graduate degree programs and undergraduate research. Future phases of the renovation work will expand and upgrade classrooms and spaces for team-based, collaborative projects.

The renovation will also allow the College of Engineering to consolidate its student services in Driftmier, providing new spaces for academic advising, experiential learning support, and student-employer interaction.

“I can’t wait to walk into a building that reflects that inspiration and the energy of its students,” said Madison Smith, a senior environmental engineering student. “That, to me, is the most influential aspect of these renovations: to have a learning space that is as inspiring as the students who walk its halls; that is as cutting-edge as the research of its faculty; and that is as warm and attentive to detail as its staff.”

During the ceremony, Leo thanked donors who have made substantial contributions toward the renovation project: Jeff and Elizabeth McLendon, the family of long-time UGA engineering professor Derrell McLendon; SteelFab Inc.; Georgia-Pacific; and Georgia Power.

Located on the southern edge of the UGA campus, the Driftmier Engineering Center opened in 1966. Originally named the Agricultural Engineering Building, it was named in honor of Rudolph Driftmier in 1982. Driftmier served as head of the department of agricultural engineering at UGA from 1930 to 1965.