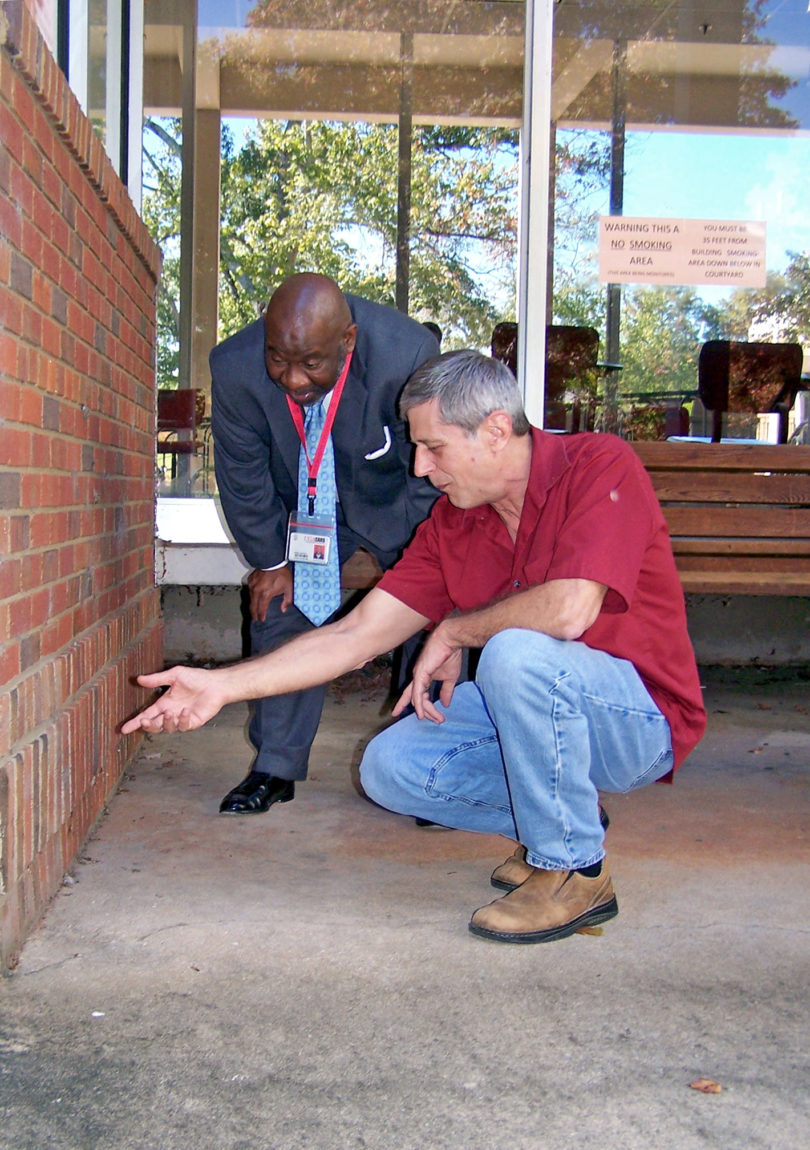 Athens, Ga. – For the past 12 years, the University of Georgia has tapped its own talent to help keep its dozens of Athens-based buildings safe from termites.

UGA entomologist Brian Forschler and his students took on the job several years ago. Since then, they’ve been able to tackle the campus termites less expensively and with fewer chemicals by staying vigilant and taking care of termite swarms early.

Forschler, a professor with the UGA College of Agricultural and Environmental Sciences, has studied termites and their biology for more than 25 years.

“The ink contains a solvent that mimics the trail pheromone that’s found in the termites,” he said. “That’s how they follow each other in the dark. They are really different from the textbook definitions. Everything about termites is cryptic since—unlike ants—they are below ground and you can’t see them.”

All this termite knowledge led Dexter Fisher, director of facilities management at UGA, to ask Forschler to take over termite treatment and prevention on campus.

“We had been using exterminators, but when you have a professional on campus who can even tell you what kind of termites you have and what country they came from, why wouldn’t we use him?” Fisher said. “It costs $2,000 to $3,000 per building, and they don’t go into near as much detail as Brian does. That was way too much money to spend and we need ways to cut down on expenses.”

The university still uses an outside company to inspect new buildings and receive a five-year warranty that covers termite damage, he said.

When termites are reported in any of UGA’s 178 main buildings, Fisher notifies Forschler, and he and his students come to inspect. Using listening devices, moisture probes and the naked eye, he evaluates the site, graphs it and provides an inspection report as required by the state of Georgia.

Like commercial pest control companies, Forschler and his students use a variety of intervention methods including baits, wood injections and targeted applications of sprays or foams. But sometimes the plan of action doesn’t require any chemicals.

“It’s surprising to me how many landscape alterations are parts of our plans,” he said. “Landscapers are sometimes (pest control operators’) worst enemies.”

To help keep termites at bay, Forschler recommends keeping soil off of the sides of a building’s foundation. Soil can stack up around foundation walls over time or as result of a landscape project.

“In the case of the UGA Ramsey Center, the builders backfilled the lawn and pushed soil up against the building,” he said. “It covered the weep-holes in the brick veneer and gave termites an open highway into the offices on the ground floor.”

In the past nine years, Forschler has responded to 57 termite reports at 43 building on the Athens campus. Most reports are of termite swarm sightings that usually occur in the spring.

Termites have swarmed from locations, like concrete pillars, not associated with any known termite food.

“In every case to date, the termites have not swarmed from those same locations in the years that followed,” he said. “In one instance, it has been nine years since the first swarm.”

Most of the termites that Forschler sees on campus are eastern subterranean termites, an invasive species of termite that can survive in rearranged habitats. The termites are not partial to old or new buildings; 90 percent of the time they find their way into buildings by following expansion joints, he said.

Forschler and his team of students have reduced the amount of pesticides applied for termite management on campus by 99 percent. “This is a little exaggerated because most of our buildings are very big, like the libraries for instance,” he said. “We only use ounces or maybe quarts per treatment instead of gallons of insecticide. We are pretty low tech.”

The collaboration has saved thousands of dollars for the university, Fisher said. “It’s been a win-win situation for both sides.”