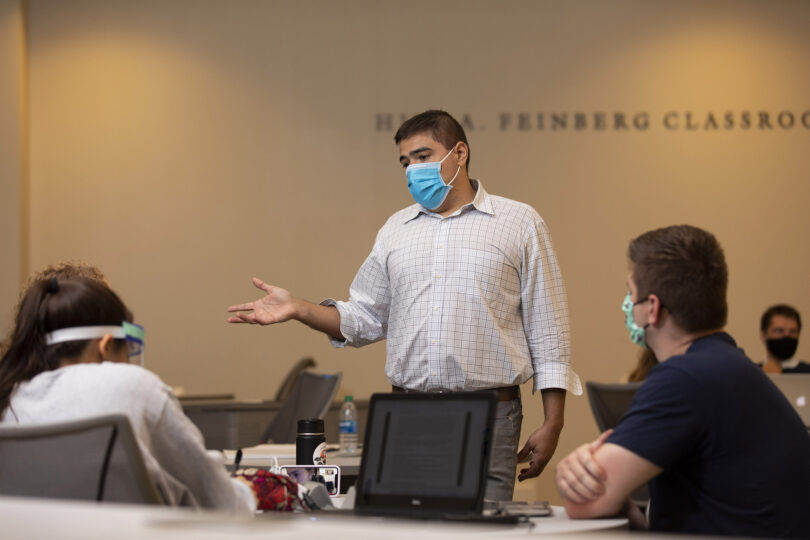 If you’ve ever received a package from Amazon and thought, ‘What was I thinking when I ordered this,’ Julio Sevilla is the one to ask.

For the past decade, the Terry College of Business marketing professor has studied why people buy the things they buy and how product placement, packaging and numeric information contribute to those decisions.

Frequently quoted in the news on marketing and consumer behavior, Sevilla was in high demand this spring and summer to explain everything from toilet paper hoarding to the run on yoga mats and hand weights.

The impulse shoppers desire to try a new shampoo or to buy an extra box of pasta can be traced back to measurable stimuli, Sevilla said. The proportions and shape of a product package, the empty space on the shelf around the product, the size and number of units of the product featured, the product’s sticker price and other numeric facts—those are all quantifiable elements, and they all have a direct impact on buyers’ intentions and sales.

“In retrospect, quantity and its associated perceptions and interpretations is the underlying theme of all my research,” he said. “It’s ratios and percentages, and I’ve always liked numbers. But I became interested in looking at numbers in another way, which is from a psychological and psychophysical perspective.”

Much of his work has focused on how shoppers react to physical and visual quantifiable aspects of the environment while shopping and consuming products.

Having more space around an object—whatever object—also makes it more aesthetically appealing.

“Aesthetics have a lot to do with how fluently we process information,” he said. “More space around them makes things easier to process, which leads us to like them more. That helps explain why the space-to-product ratio effect works in both retail and online settings. Similar notions have been shown in advertising, too.”

Sevilla’s interest in studying people’s reactions to space and emptiness was ignited by his more general penchant for investigating scarcity. When people perceive something as limited in availability, it increases their desire for it, he said.

People perceive rare foods as having more calories, and young people are more likely to eat dreaded vegetables if they are presented in smaller portions. They’re tastier if they perceive them as scarce.

Another part of his interest in the science of scarcity comes from his background growing up in Nicaragua in the 1980s.

Between 1985 and 1990, the country was under a trade embargo with the United States, and some items were hard to find in stores even if you had the money to buy them. Alternatively, Sevilla said, many people—and this applies today—couldn’t afford what they needed, even if they could find it. Witnessing how salient scarcity was in people’s lives probably spiked an interest in studying this topic from a wide array of perspectives.

“I consider myself fortunate, but growing up in a developing country undergoing national and international conflicts, I saw people living in poverty,” he said. “I think this boosted my interest in scarcity, and it may have influenced how I look at the world.”

Sevilla teaches consumer behavior at the undergraduate, master’s and doctoral level. His students continuously introduce him to ways the marketplace is changing, and he’s always interested to investigate new trends.

“I think teaching is a way to share, but we all gain something from it,” he said. “I learn from students, and the students benefit from what I know. These are very important years in these students’ lives, so being able to play a role in preparing them for their professional lives is very rewarding.”