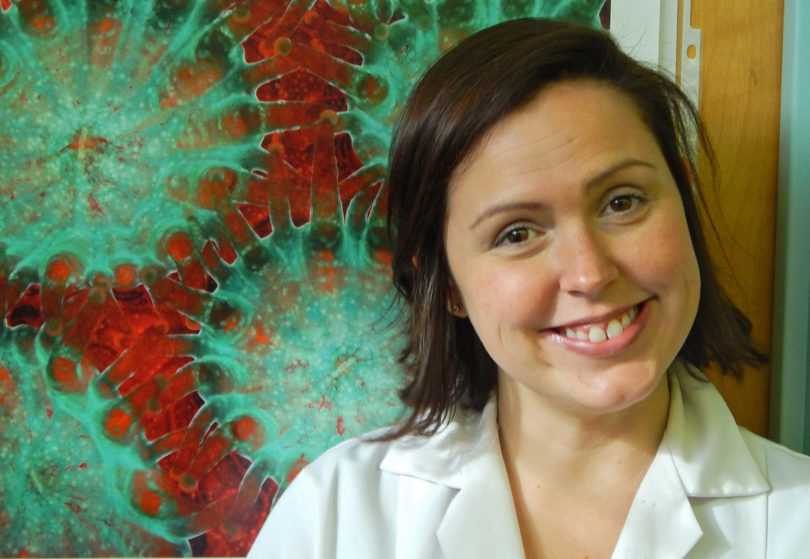 Athens, Ga. – Defective cilia can lead to a host of diseases and conditions in the human body—from rare, inherited bone malformations to blindness, male infertility, kidney disease and obesity. Scientists knew that somehow these tiny cell organelles become deformed and cause these diseases because of a problem related to their assembly, which requires the translocation of vast quantities of the vital cell protein tubulin. What they didn’t know was how tubulin and another cell organelle known as flagella fit into the process.

Now, a new study from University of Georgia cellular biologists shows the mechanism behind tubulin transport and its assembly into cilia, including the first video imagery of the process. The study was published in the Journal of Cell Biology.

“Cilia are found throughout the body, so defects in cilia formation affect cells that line airways, brain ventricles or the reproductive track,” said the study’s lead author Julie Craft, a sixth-year doctoral student at UGA. “One of the main causes of male infertility is the cilia won’t function properly.”

An interdisciplinary team from the UGA Franklin College of Arts and Sciences and the College of Engineering collaborated on the research, which used total internal reflection fluorescence microscopy to analyze moving protein particles inside the cilia of Chlamydomonas reinhardtii, a green alga widely used as a model for cilia analysis.

The team exploited the natural behavior of the organism—which is to attach by its cilia to a smooth surface, such as a microscope glass cover. This positions the cilia within the 200-nanometer reach of the total internal reflection fluorescence microscope allowing for the imaging of individual proteins as they move inside the cilia.

A video explaining the process was published along with the study and is available at http://jcb.rupress.org/site/biosights/biosights_jan_19_2015.xhtml.

“Tubulin is transported by this process, which we call intraflagellar transport, or IFT,” said study co-author Karl Lechtreck, an assistant professor in the department of cellular biology and a member of the Integrated Life Sciences Program. “Though it has long been suspected in the field and there was indirect evidence to support the theory, this is the first time it has been shown directly, through live imaging, that IFT does function as a tubulin pump.

“About 400,000 tubulin dimers need to be transported within 60 minutes to assemble a single cilium. Being able to see tubulin moving into cilia allowed for first insights into how this transport is regulated to make sure cilia will have the correct size.”

The new findings are expected to have wide implications for a variety of diseases and conditions related to cilia defects in the body. “We are on the very basic side of this research,” Lechtreck said. “But because more and more diseases are being connected to cilia-related conditions, including obesity and even diabetes, the number of people working on cilia has greatly expanded over the last few years.

“Unicellular models are great tools to address the many fundamental questions which remain unanswered such as controlling the size of cilia and how cells determine the proteins to be placed into these sensory organelles. In Chlamydomonas, we can initiate cilia formation experimentally, which allows us to see cilia during construction and analyze protein traffic while they are made.”

Additional study co-authors include Peter Kner, assistant professor of engineering at UGA; Aaron Harris, a third-year doctoral student in the department of cellular biology; and Sebastian Hyman, a recent UGA graduate who now studies medicine at Mercer University School of Medicine. The research is supported by the National Institutes of Health under grant number GM110413.