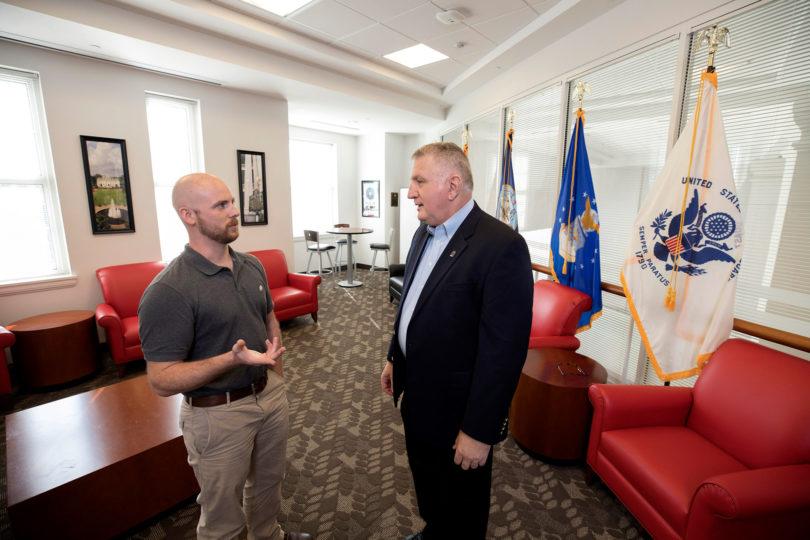 Dave Allen is having a completely different UGA undergraduate experience than the majority of his classmates.

For starters, he is 29 years old and married. When his classes end, Allen does not head back to his residence hall or hang out at the Tate Student Center. Instead he works as an undergraduate research assistant or goes home to his wife, Ashley.

More significantly, Allen is one of the 122 student veterans currently pursuing an undergraduate degree at UGA. After attending the university from 2006 to 2009, Allen left school and joined the U.S. Navy, before returning to Athens last summer.

“I got in the military with the goal of picking up some discipline and leadership before coming back to get my degree,” he said.

Statistically speaking, military veterans who come to public universities like UGA are a fairly at-risk group, according to Ted Barco, director of UGA’s Student Veterans Resource Center within the Division of Student Affairs.

“If you look at the data nationally, about half the student veterans at public institutions graduate over a six-year period,” said Barco, who is an Air Force veteran.

This happens for a variety of reasons. Nationally 43 percent of a university’s student veterans are married or have dependents. Veterans also are often older than the average undergraduate—about 60 percent of UGA’s student veterans are between the ages of 22 and 30 (the other 40 percent are between 31 and 62)—so they often want to complete their education as quickly as possible. This creates a problem when it comes to developing relationships and contacts with professors and other professionals, which is crucial to post-graduate success. Additionally, the majority of undergraduate veterans are first-generation college students and have transferred into UGA from another, smaller institution.

Through his work at the SVRC, Barco aims to help mitigate these unique challenges that student veterans face. Using what he calls “persistent coaching,” the center provides student veterans with a structure for success. This includes putting them in touch with faculty and staff members around campus who can assist veterans during their time at UGA.

“Often, faculty and staff members can make a point far better than I can,” Barco said.

Barco enlists about 80 UGA faculty and staff members interchangeably as either transition coaches or academic contacts. Transition coaches like Andrew Owsiak meet with veterans during their first semester on campus.

“Our role is just to give them a point of contact,” said Owsiak, an associate professor in the international affairs department of the School of Public and International Affairs. “I like to get a sense of who the students are, what their background is and what their interests are.”

Whenever possible, Barco assigns coaches from the same department in which each veteran is majoring. Not only do the coaches help the students make their way through the department, but they also connect them with other faculty members who serve as academic contacts.

“A big piece of this is to establish networks so that you have people who mentor you, give you advice and may lead you to an opportunity either in academe or in the job market,” said Keith Harris, the Harmon Professor of Pathology in the College of Veterinary Medicine, the head of the college’s pathology department and an academic contact.

“I have a lot of respect for our veterans,” Owsiak said. “This is one of their benefits that I think they earned by serving.”

The SVRC program also has veterans meeting with “readiness coaches” after their first semester. These coaches are one of the five graduate assistants (two paid and three volunteer)—and all are either veterans or active duty graduate students themselves—working for Barco in the center. This component of the persistent coaching program helps student veterans develop their resume, expand their networks and establish a meaningful brand that complements their military experience.

This fall, Barco and SVRC began pilot-testing a tutoring portion of the program with four students. Referred to as “academic coaching,” this segment is led by Sylvia Hutchinson, a professor emerita of higher education and reading education. Starting in the spring, this program will be available to all undergraduate student veterans. Barco plans to connect transitioning veterans proactively with Hutchinson as part of their transition process.

While it’s still expanding and being tweaked, Barco’s program already has yielded positive results. The graduation rate for student veterans is up to 85 percent, well above the national rate of 52 percent. Undergraduate veterans taking a course load of 13 hours have an average GPA of 3.2. In four short years, UGA has been recognized among national universities for its support to student veterans. That recognition recently led to an invitation to speak about persistent coaching at the 2018 National Student Veterans of America Conference in San Antonio.

“This program is wonderful,”Harris said. “It shows a real commitment to our veterans. I am proud of the fact that I’m at a university that does something like this.”

Allen gives the SVRC’s persistent coaching program and the connections it has afforded him credit for helping him during his studies at UGA.
“This program is great,” he said. “It has been extremely helpful for me and given me the opportunities to excel.”

To learn more about the Student Veterans Resource Center or to become involved with the persistent coaching program visit svrc.uga.edu or email svrc@uga.edu.