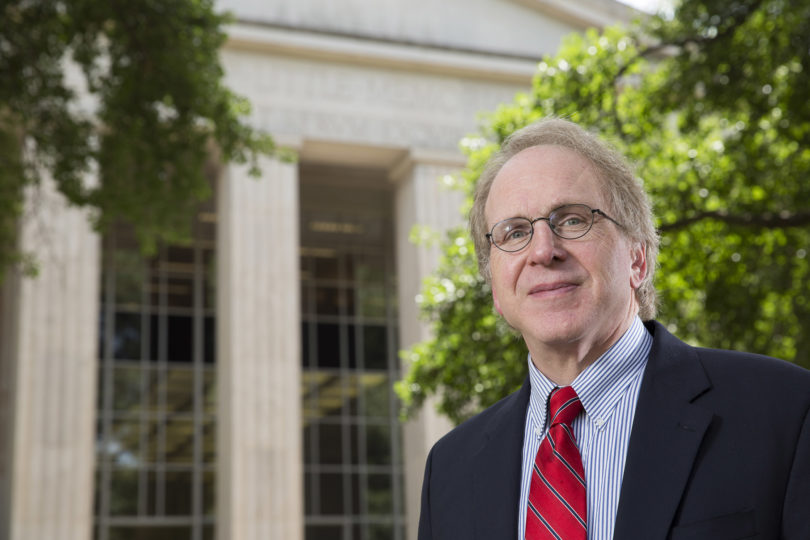 When William Gray Potter joined the UGA Libraries as university librarian in 1989, the Internet was the domain of scientists, electronic mail was a cumbersome system that did little to facilitate communication and the “World Wide Web” was but a distant vision. A quarter-century later, Potter has used that technology to indelibly shape libraries in Georgia.

“I never expected to stay in one job for 25 years, but I found that I enjoyed the institution, the area and the people. No other opportunity compared,” Potter said. “Also, I found considerable satisfaction in taking a long view, in having goals that take time and patience to achieve.”

When he retires Aug. 31, there can be no doubt Potter has accomplished a great deal. Most recently, he led the effort to construct the Richard B. Russell Building for the university’s Special Collections Libraries. The $46 million, 115,000-square-foot archival storage and research facility includes a museum component to exhibit historical and cultural artifacts and classrooms so faculty can use rare materials for instruction.

Earlier, he played a key role in the design of the Miller Learning Center, an innovative 200,000-square-foot facility that opened in 2003 and combined classrooms with library study space. The main and science libraries also have undergone major renovations.

“Bill Potter has provided extraordinary service to the university as its long-serving university librarian and associate provost. He has also served the institution in many key roles as a leading citizen of the community, including the chair of four provost search committees and being a leader at the national level of research university librarians,” said UGA President Jere W. Morehead. “He truly will be missed for the wise counsel and thoughtful leadership he has provided for so many years.”

Potter was hired in 1989 from Arizona State University for his knowledge of the nascent technology changing the business of libraries. Subsequently he was instrumental in establishing GALILEO, the statewide electronic library that allows academic, public, technical and school libraries around Georgia to share electronic databases. He was the moving force behind the Digital Library of Georgia, a GALILEO initiative based at the UGA Libraries. The digital library provides a gateway to Georgia’s history and culture found in digitized books, manuscripts, photographs, government documents, newspapers, maps, audio, video and other resources assembled in cooperation with other libraries throughout the state.

“GALILEO has done well,” Potter said. “It is one of the few virtual libraries that covers all types of libraries. It’s still a model for others. We started the DLG, and I thought it was so important that we funded it ourselves and sought external grants. It’s very impressive and actually much bigger than I thought it would be.”

Under his leadership, the libraries received more than $45 million from private giving.

Despite successfully raising private monies, the most challenging aspect of Potter’s tenure has been managing the libraries’ budget during recent difficult financial times. Funding for the purchase of books and journals, for example, was reduced as state budget cuts deepened a few years ago.

“We took a big hit in 2009 and canceled nearly 1,600 journal titles,” he said. “In recent years we’ve regained some ground, thanks to then-Provost, now President, Morehead.

“It’s almost an unsolvable problem because journal prices rise every year,” Potter also said. “We have no control over what the publishers charge and faculty and students, especially those engaged in research, need these journals. Something has to be done about the high cost of journals.”
Of all he has seen over the past 25 years, Potter most values the people with whom he has worked in the University Libraries.

“We have a great group of people who want to work here,” he said. “We are doing interesting things that benefit the university and the state.”

Potter has published widely and given numerous presentations on many topics relating to academic libraries. His accomplishments have been noted by the American Library Association with its award of the Hugh Atkinson Memorial Award, given by four ALA divisions to honor innovators in modern librarianship; the Nix-Jones Award, the highest honor given by the Georgia Library Association; the distinguished alumnus award and an honorary doctorate from his undergraduate institution, Southern Illinois University at Edwardsville.

He is a past president of the Library and Information Technology Association of the Online Computer Library Center users council. He has served on the Online Computer Library Center board of trustees, the board of directors of the Association of Research Libraries, the IBM Higher Education Customer Advisory Committee and the board of the Southeastern Library Network. He edited two major journals, Information Technology and Libraries and College & Research Libraries.

Potter and his wife have spent the summer packing their belongings, and he looks forward to loading his beloved dog, Gussie, in the car and heading west, but predicts little beyond that.

“I really love the desert,” he said. “I look forward to having free time, spending time with Marsha. For now, that’s enough. We’ll see.”