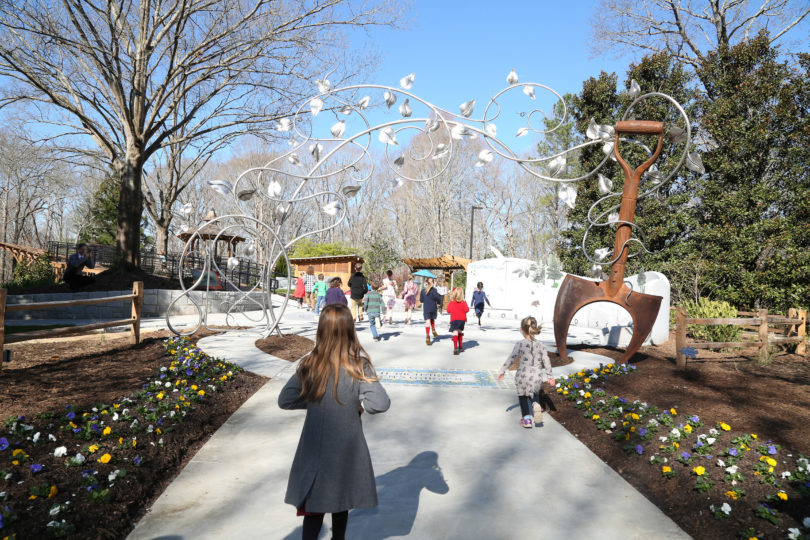 There were many things Alice Huffard Richards was known for—her tenacity, her love of children, her knowledge of Latin plant names, among them.

And her pruning shears, which were an old pair of scissors, always within reach.

“She’d go to visit a friend, and pause to prune the flowers before she went in. She’d even pull over on the side of the road and prune or deadhead flowers that needed some love—and she would do this anywhere and everywhere,” said Jim Richards, one of Alice Richards’ seven children, who spoke during the Monday morning dedication ceremony. “She was renowned for always having scissors in the car with her.” 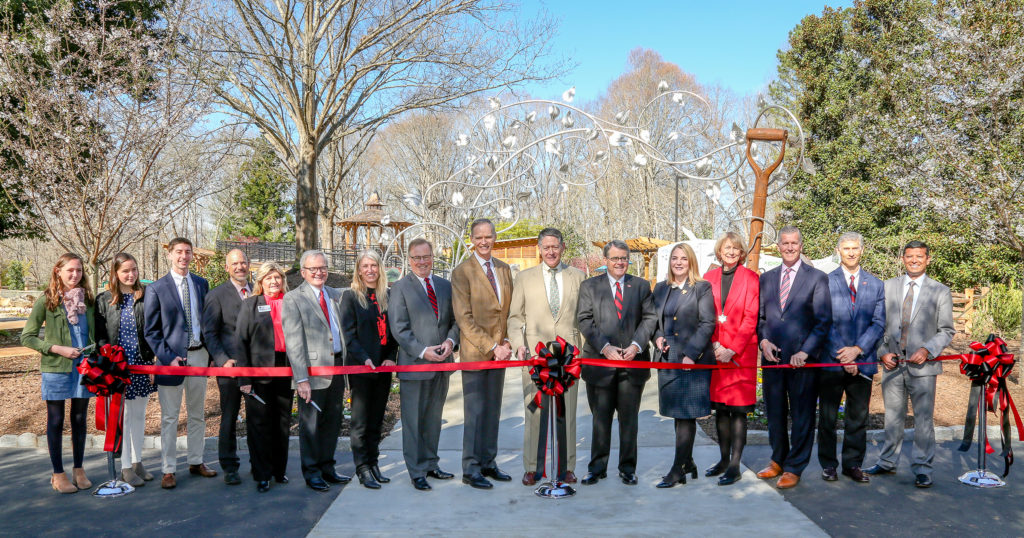 Officials, members of the Richards’ family and friends of the State Botanical Garden prepare to cut the ribbon to dedicate the Alice H. Richards Children’s Garden Monday.

The Alice H. Richards Children’s Garden at the State Botanical Garden of Georgia memorializes her commitment to plants, children and Georgia. The garden is set to open March 23 with a festival-style spring celebration featuring food trucks, music, dance and aerial performances at the Theater-in-the-Woods stage and  free fun throughout the entire day.

The first $1 million toward the garden was given to UGA by Alice Richards’ family. The balance, about $4 million, was raised through private donations, including money from all 80 members of the State Botanical Garden advisory board, of which Richards was a charter member, and every employee of the garden.

The centerpiece of the State Botanical Garden, a UGA public service and outreach unit, the children’s garden is a 2.5-acre interactive outdoor classroom where visitors can learn about Georgia history and natural resources, native plants and pollinators, and healthy foods. 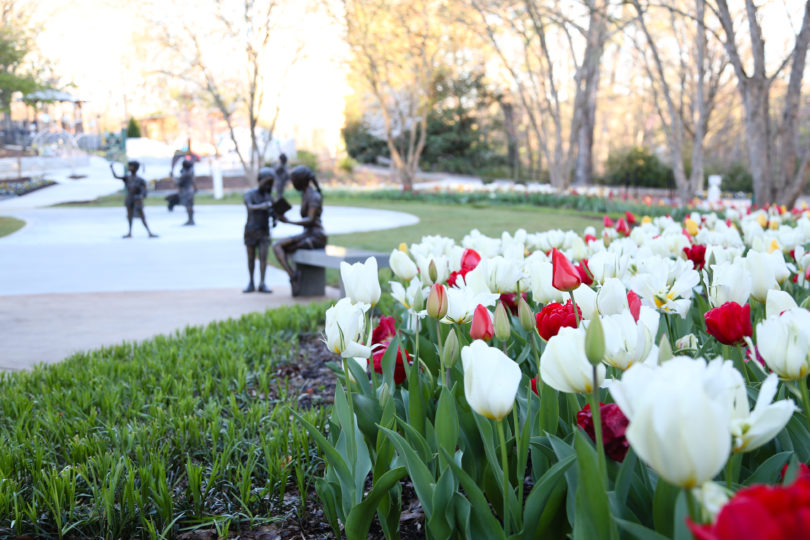 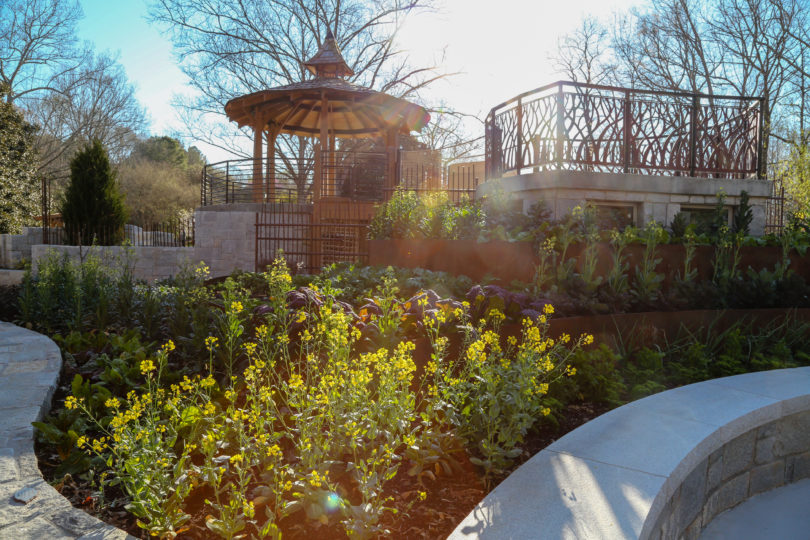 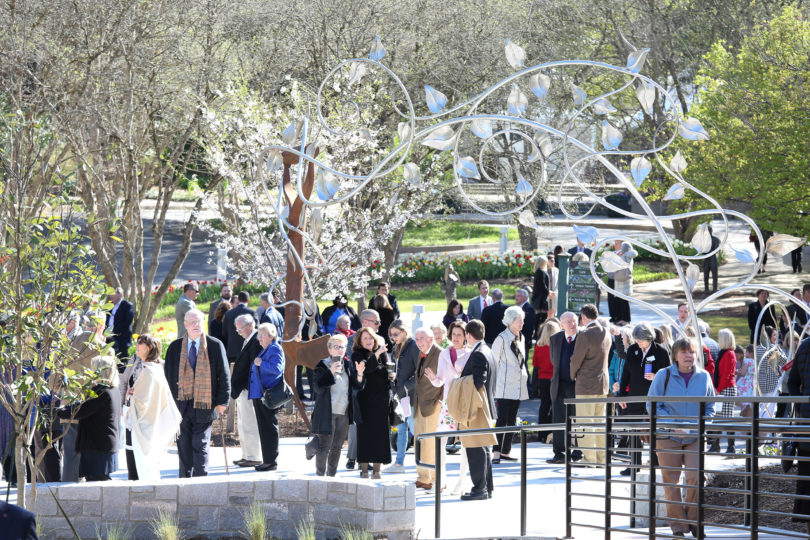 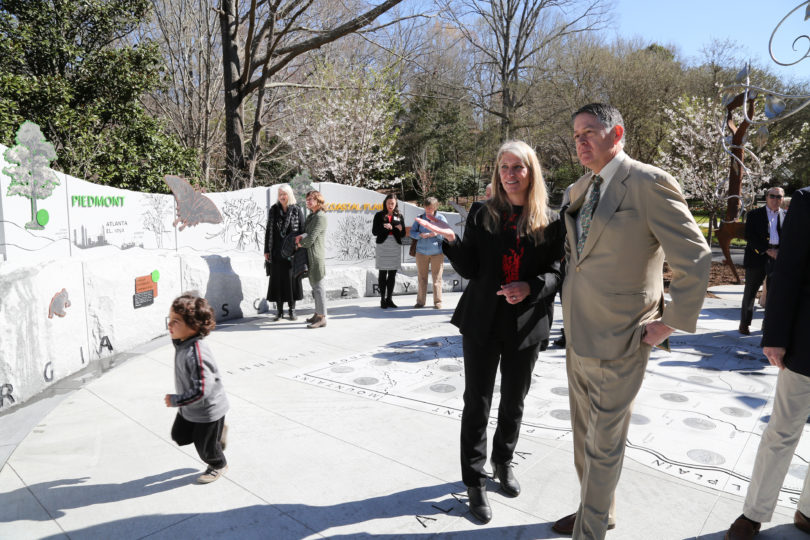 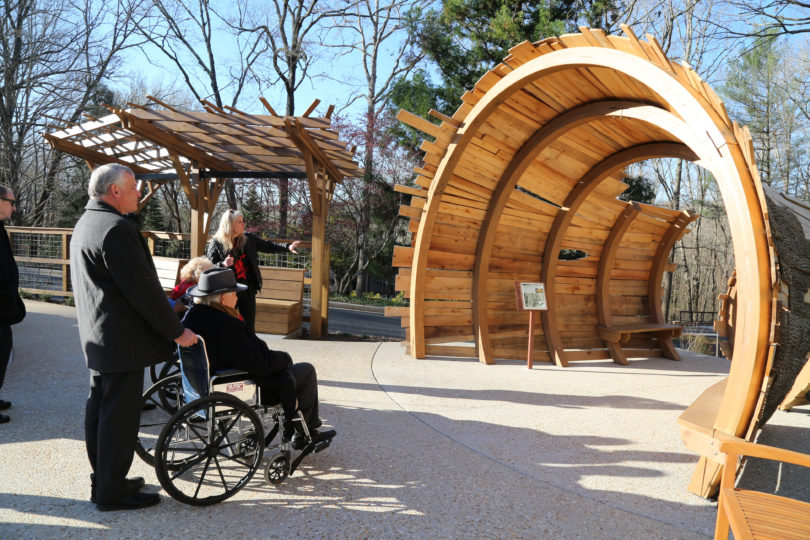 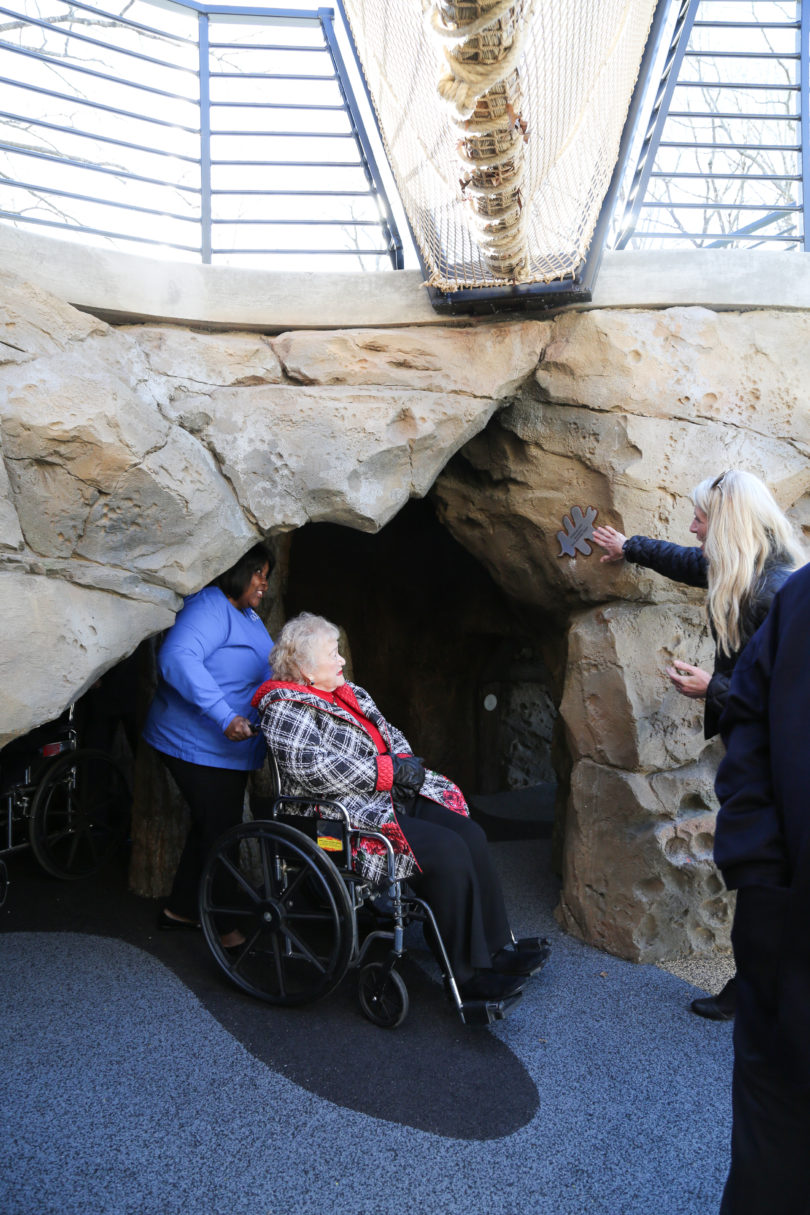 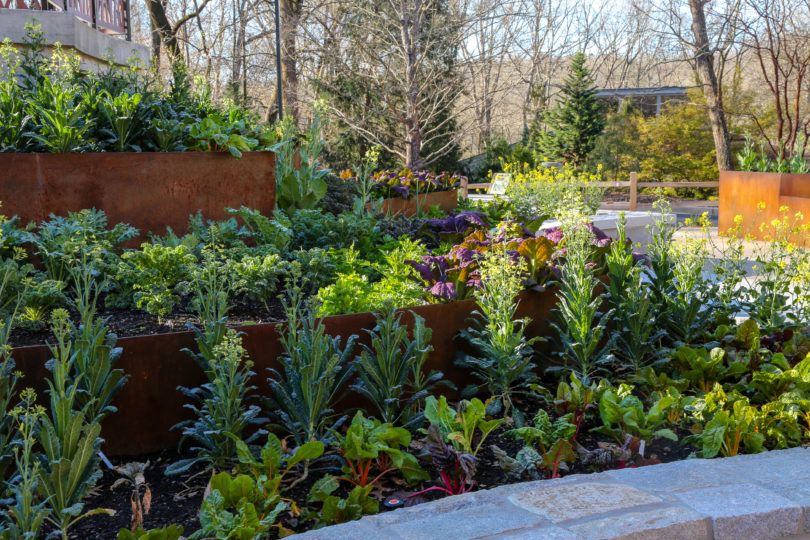 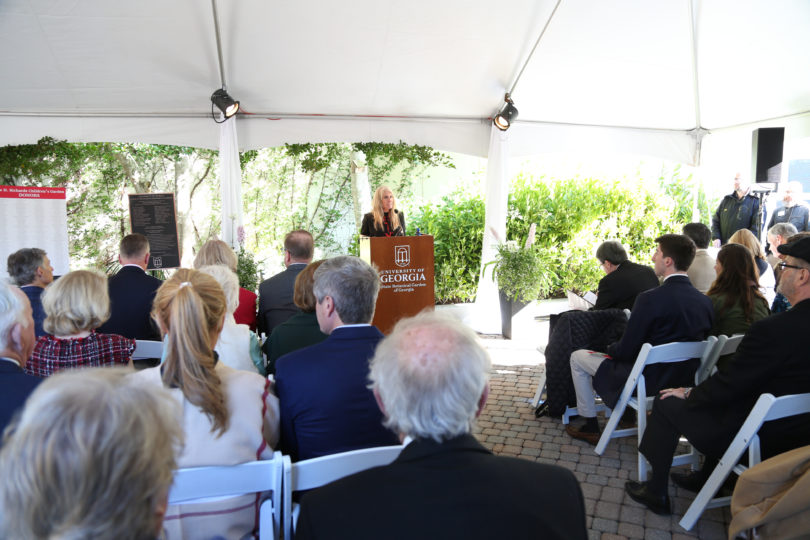 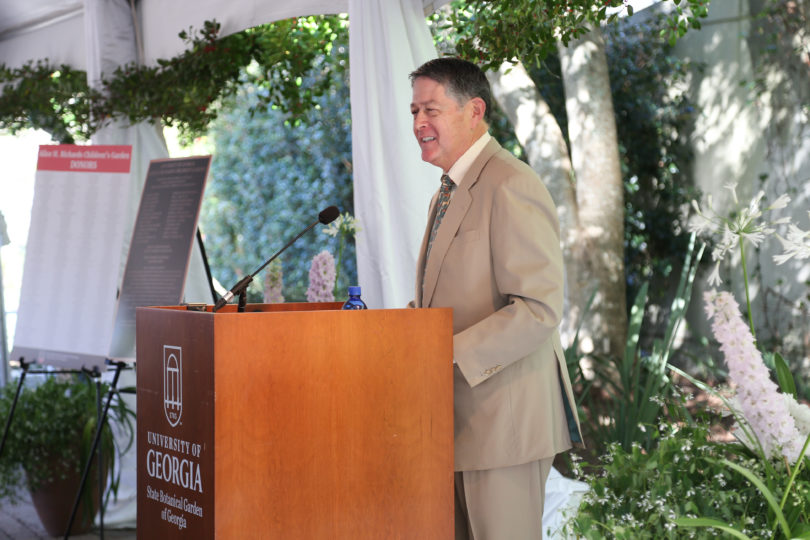 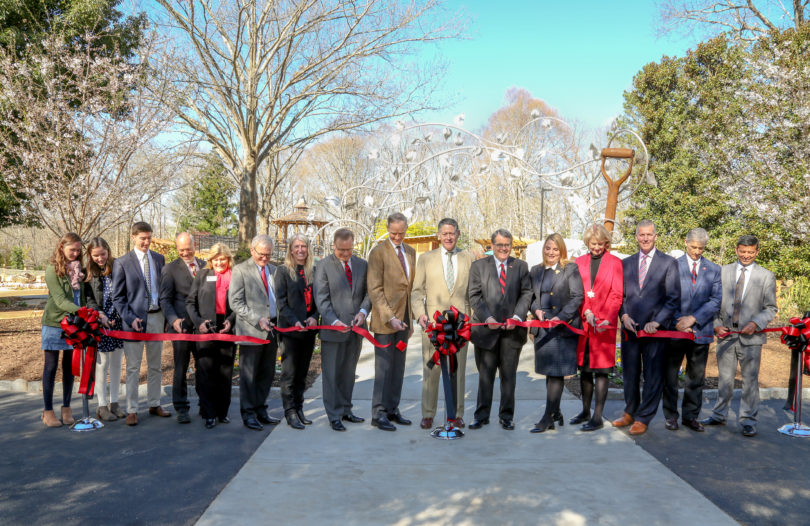 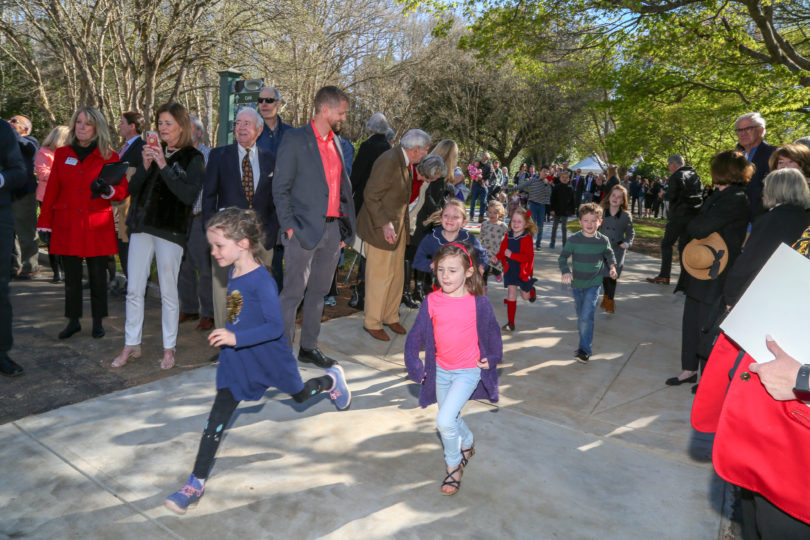 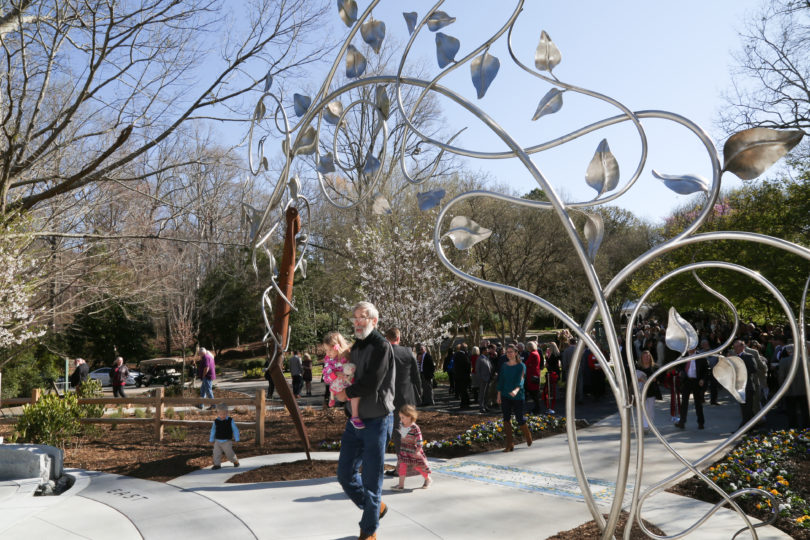 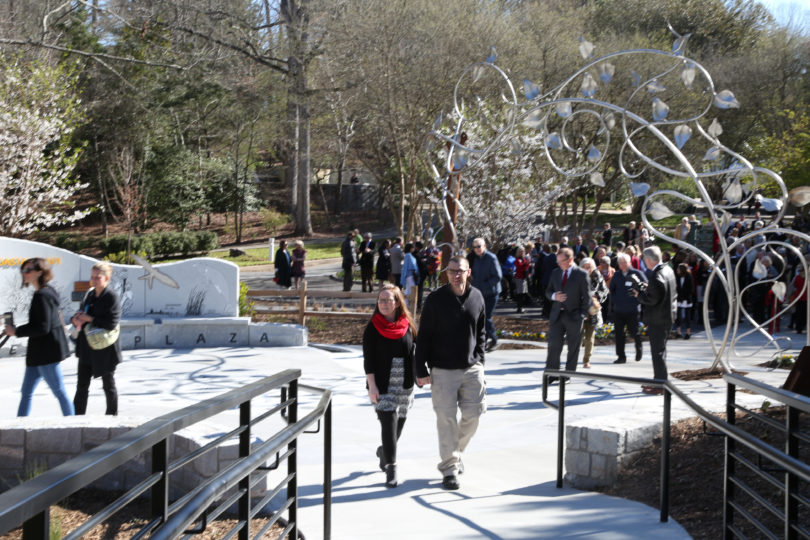 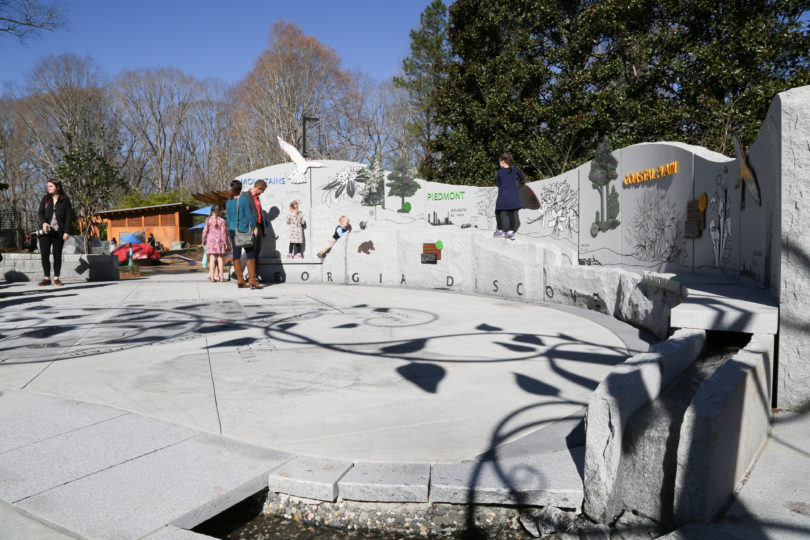 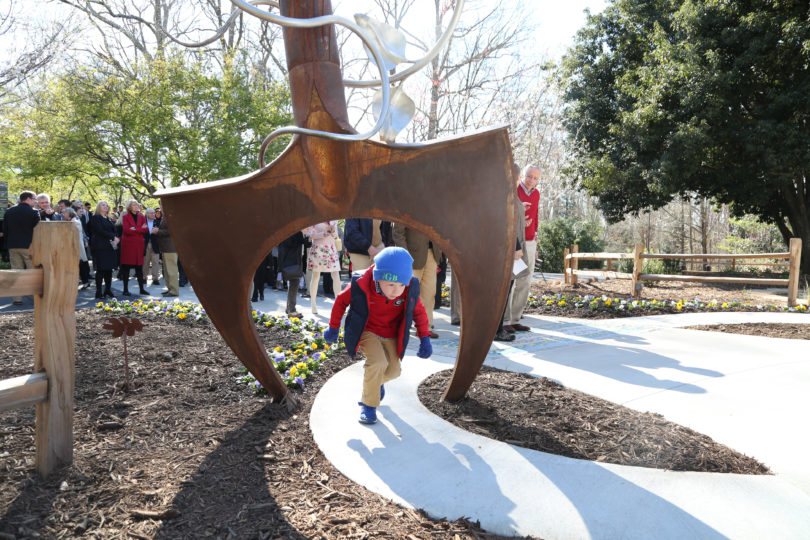 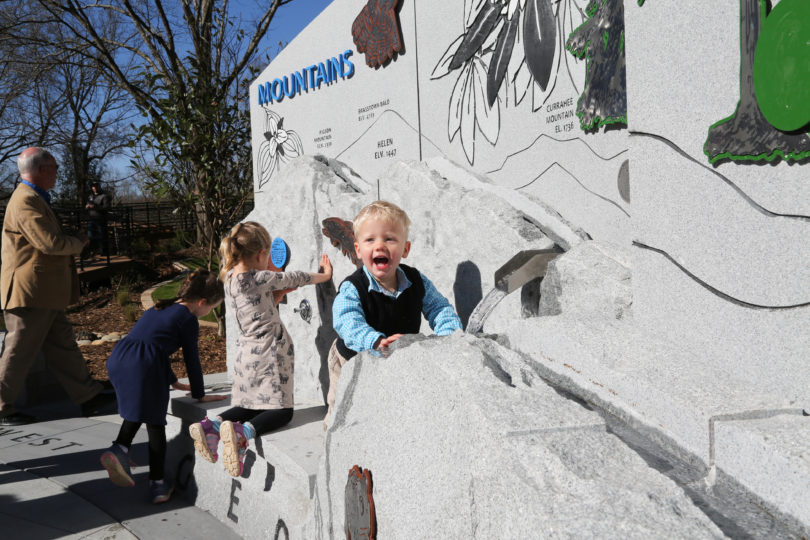 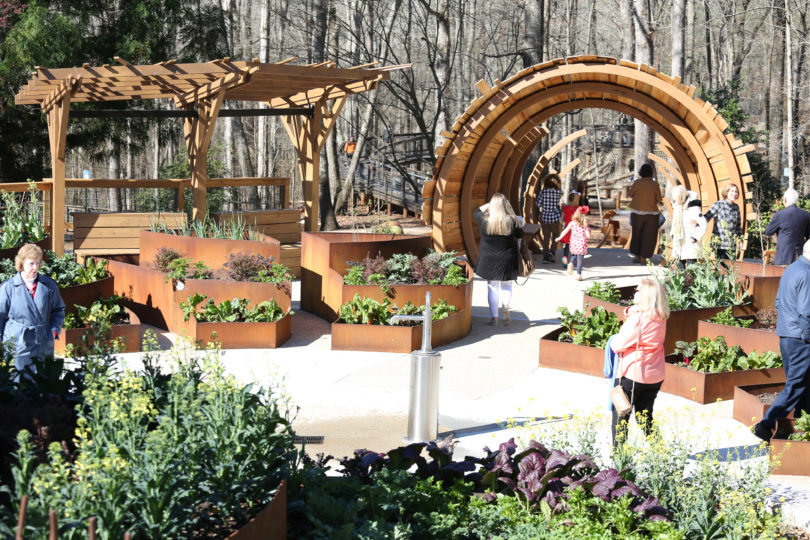 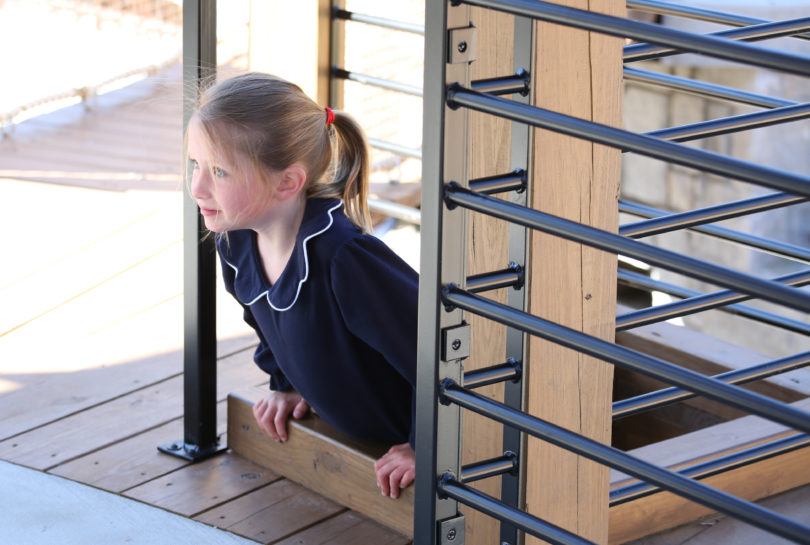 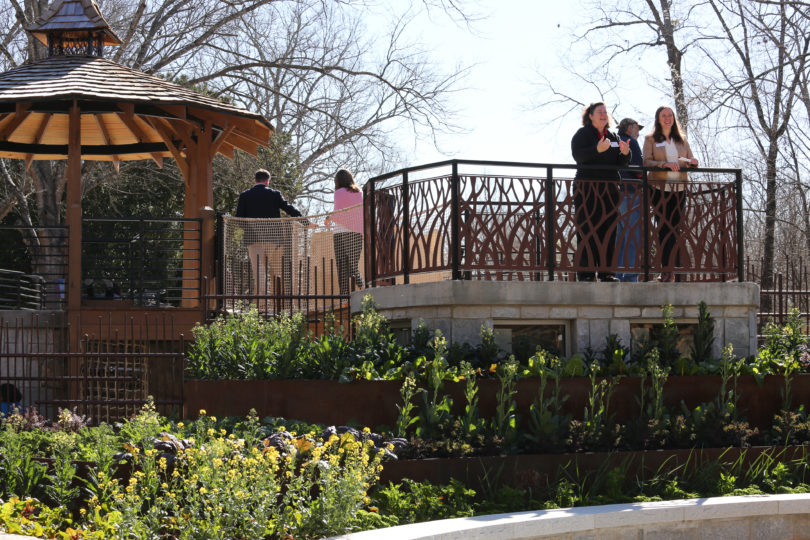 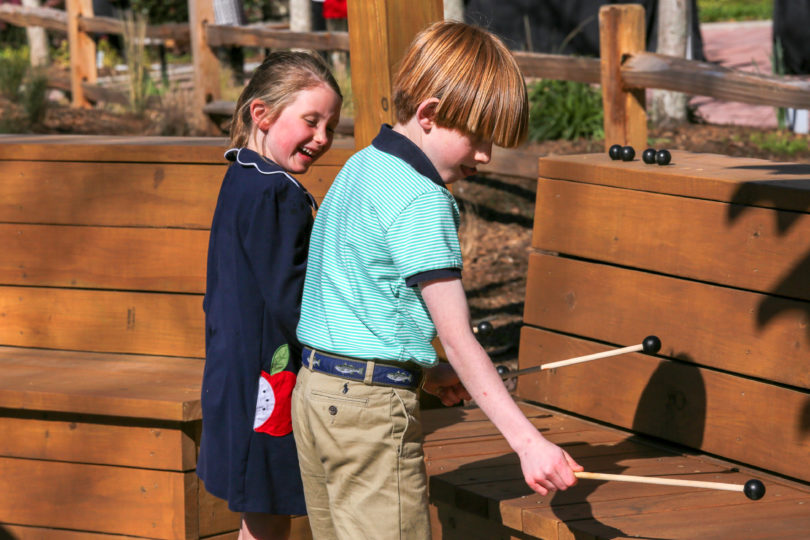 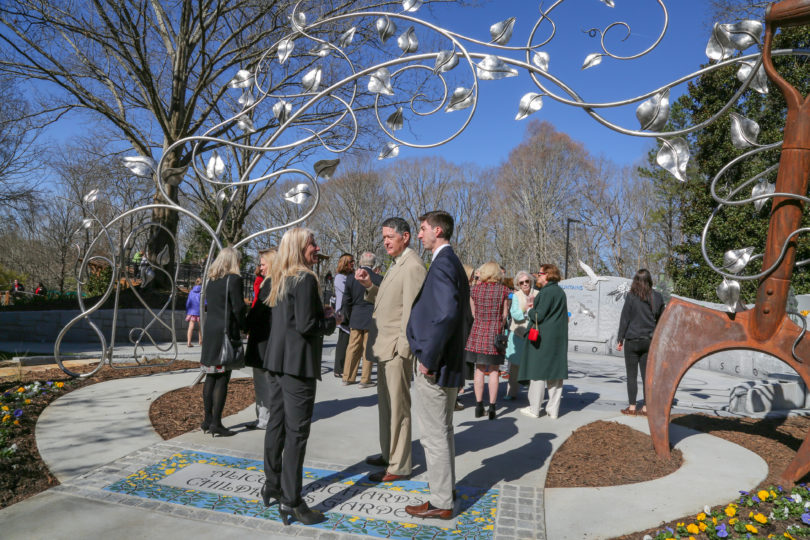 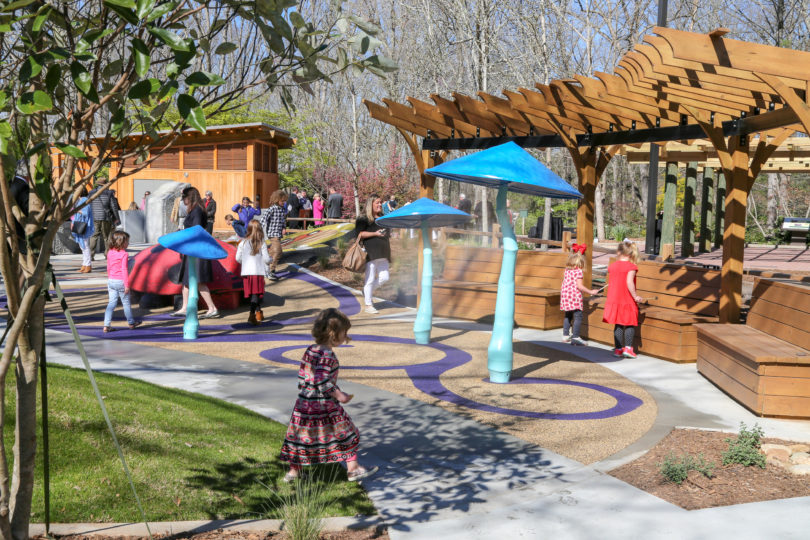 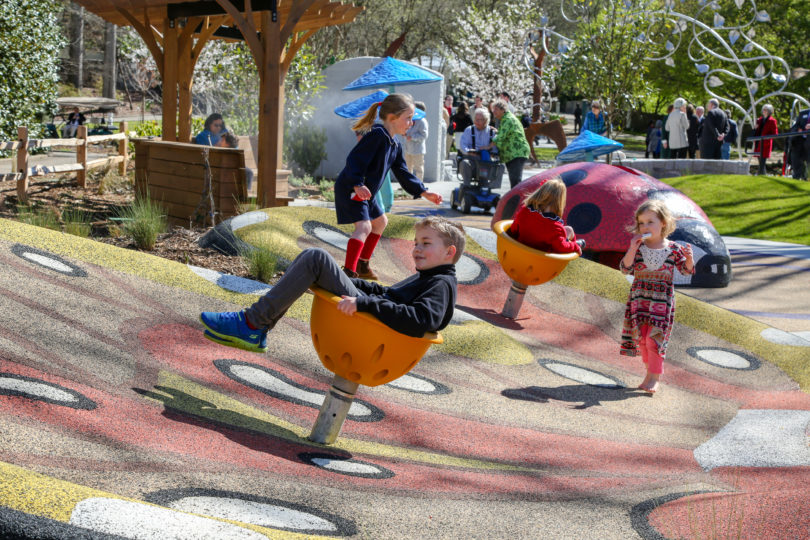 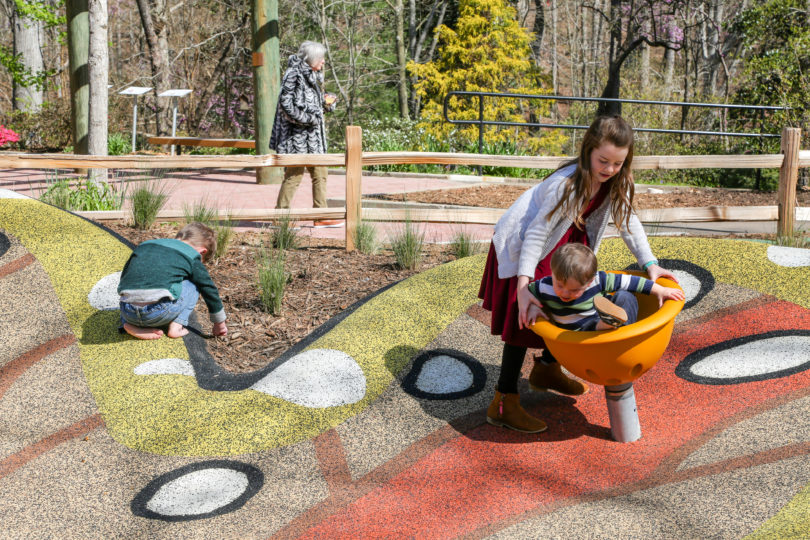 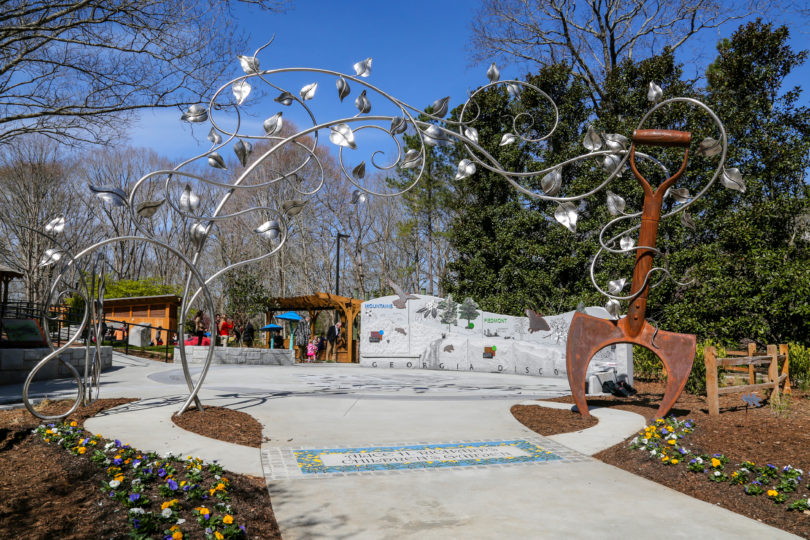 “In nearly every speech I give, I always try to remind people that we are a land-grant and sea-grant university, and with that comes a responsibility to make our resources available to individuals and communities throughout the state,” University of Georgia President Jere W. Morehead told the more than 200 people who attended the dedication and ribbon-cutting. “This botanical garden, and especially the children’s garden that we’re dedicating today, is such a great example of that goal.”

The garden features a replica of Ellison’s Cave in Walker County, the 12th deepest cave in the United States, mastodon fossils from 40 million years ago, granite mined from Elbert County and a pitcher plant bog—just a few points of interest visitors can expect to see, touch and explore at the new children’s garden.

“The garden is designed to showcase Georgia and the valuable natural resources in our state,” said Jennifer Cruse-Sanders, director of the State Botanical Garden. “We are so excited to share these themes with communities in Georgia and beyond, as a way of achieving our mission for service and outreach.” 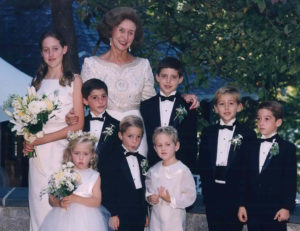 Alice H. Richards and her grandchildren.

Hailing from Carroll County, Georgia, Alice Richards dreamed of creating a children’s garden in Athens, from the time she joined the State Botanical Garden in the early 1980s, when the board of advisors was formed.

“She asked me why she should join the garden’s board, and I said, ‘you love flora and fauna, but more than that, you love conserving land and leaving things better,’” said Susan Duncan, who recruited Richards to join the original board of advisors. “You have the opportunity to create something wonderful.”

Richards was as comfortable recruiting new board members to the garden board as she was on her hands and knees, planting, trimming and watering in the flower garden. When the master plans for the State Botanical Garden were being drawn up, she proposed the initial concept for a children’s garden—a place to nurture and enrich the lives of the next generation.

“I have heard from people who knew Alice that she loved children, and that she was a nurturing and caring person,” Cruse-Sanders says. “It is fitting that the new garden that we have created to engage and bring wonder to children and families is filled with that same spirit.”

“She would be amazed and delighted if she could see it now,” Jim Richards said.