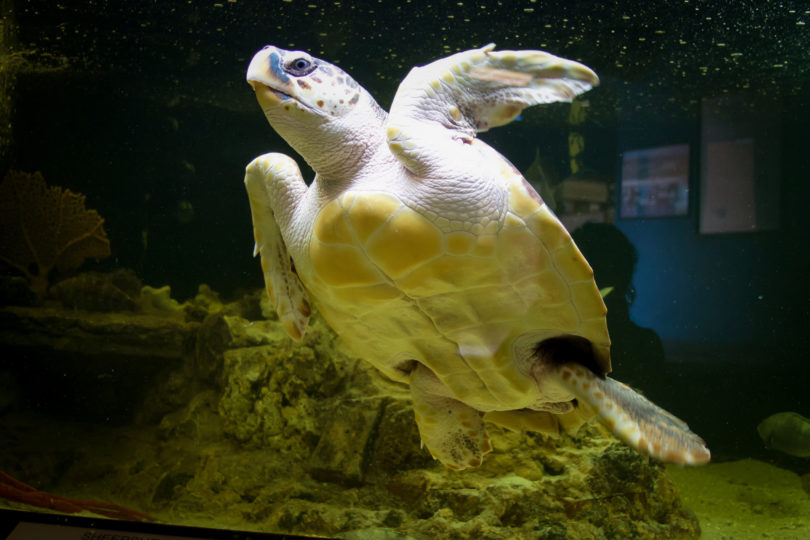 Skidaway Island, Ga. – Rider, a 3-year-old loggerhead sea turtle at the University of Georgia Marine Education Center and Aquarium on Skidaway Island, is set to be released from Wassaw Island National Wildlife Refuge on May 1.

Rider was a straggler discovered during a nest excavation by members of Caretta Research Project who monitor the sea turtle nests on Wassaw Island.

“For the 22 years that I’ve been here, we have given straggler hatchlings to the UGA Aquarium. It’s always been a good partnership, so when they asked if we still had nests in the ground, I was happy to save them a straggler,” said Kris Williams, director of Caretta Research Project.

Stragglers that don’t make it out of the nest with the rest of the hatchlings typically have a much lower chance of survival. By giving them a temporary home at the aquarium, it increases the likelihood that they’ll make it in the wild. The stragglers live at the aquarium for about three years before being released or transferred to a larger home at the Georgia Aquarium in Atlanta, where they can educate a broader audience about native sea turtles found on the coast.

As an ambassador sea turtle, Rider, and another 2-year-older loggerhead, Lefty, play an important role in educating visitors to the UGA Aquarium. Marine educators at the center teach classes that cover reptiles, sea turtle natural history, marine debris and endangered species. They’re featured in multiple outreach programs for all age groups, from pre-K to adult.

“Since arriving, we estimate that Rider has seen about 70,000 visitors,” said Lisa Olenderski, assistant curator at the aquarium. “If each of those people can leave knowing just one new fact about sea turtles or gain a new appreciation for them, it’s a win.”

Weighing in around 50 pounds and over 2 feet long, Rider is nearing the maximum size the aquarium can handle.

“We can only house them for so long before they literally outgrow us,” said Devin Dumont, aquarium curator. “For the past few months, we’ve only been feeding Rider live food, such as blue crabs and mussels, so he can practice active foraging and hunting skills to get ready for release. We also have to get approval from a number of agencies and organizations in Georgia.”

One such approval comes from Dr. Terry Norton, director and founder of the Georgia Sea Turtle Center on Jekyll Island. During Rider’s recent checkup, Norton’s team recorded his weight, collected blood samples and examined his overall physical health before approving the sea turtle for release.

The Georgia Department of Natural Resources and the U.S. Fish and Wildlife Service also have signed off on the release. Representatives from those agencies will be on hand to supervise and attach tags to Rider, so that he can be identified if encountered again.

Also in attendance will be Williams, who discovered Rider on the island.

“As a straggler, Rider most likely would not have even made it out of the nest,” Williams said. “We are so happy to partner with staff at the aquarium to give him a fighting chance.”

Note to media: Media wishing to cover the event should make arrangements in advance by contacting Emily Woodward, public relations coordinator for UGA Marine Extension and Georgia Sea Grant, at 912-598-2348 ext. 107 or ewoodward@uga.edu.