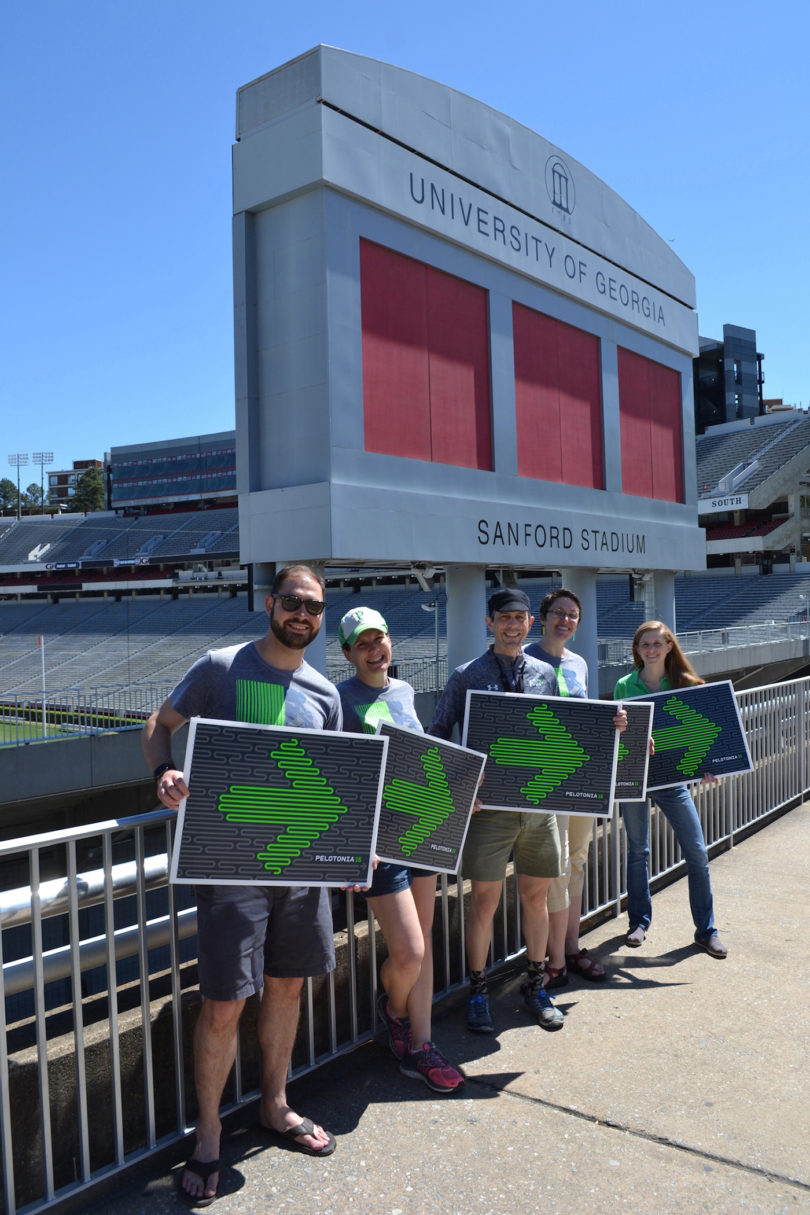 Members of the UGA Pelotonia team

Some hard-core cyclists shave their hair for that sliver of an edge-less wind resistance, faster speed.

But when Amy Heath sported a bald head and eyebrows for last year’s Pelotonia bike ride, the look was not by choice. Still, she ended up riding twice as far as she’d planned.

That’s because Heath, a clinical assistant professor in the department of language and literacy education, lost her hair after going through chemotherapy to fight breast cancer, which had been found less than a year earlier. Despite the diagnosis—or, rather, because of it—Heath trained to ride in the annual 180-mile, three-day bike ride that raises money for cancer research.

“I was diagnosed in 2014, and I had surgery in January (of 2015). That’s when I set a goal to ride 25 miles. That’s the minimum. I said, ‘I’ll be fighting, rather than surviving,'” says Heath, a clinical assistant professor in the University of Georgia College of Education’s department of language and literacy education. “My friend said, ‘I’m going to ride in the Pelotonia for you,’ and I said, why don’t we do it together? It was so good to have a physical goal.”

This year is Pelotonia’s eighth year of bringing thousands of cyclists from across the country to Columbus, Ohio, to fight cancer. The race takes place Aug. 5-7 and all money raised goes to support cancer research.

Heath, who moved to Athens from Ohio State University, knew about the race from her time there and even rode in the first one. She had an unofficial team supporting her last year—a good friend, her brother, her cousin, radiologist and oncologist were among the participants—but this year she’ll be part of an official UGA-based team, dubbed “Midnight Train From Georgia,” and will be celebrating all that she’s accomplished since riding with her bald head just a year ago.

One of those accomplishments is simply finding her fellow Georgia riders.

‘I’m powerful. I can do this.’
Not long before last year’s Pelotonia, Heath spotted something familiar while walking into Dondero’s restaurant. On the back of a car in the parking lot was a lime green arrow, Pelotonia’s logo. Who in the world would know about Pelotonia here, she thought.

So while working on her laptop she watched, slowly deciphering who in the restaurant might be the cyclist. Finally, she decided to ask a woman seated nearby, and quickly realized not only was she riding, but was riding with three others connected with UGA.

“It was just so amazing knowing other people were here,” she said, tears coming to her eyes. “There’s something about cancer-if you’ve been through it, you’re there for each other. I think motherhood is similar. So we made plans for me to meet the UGA peloton during the Pelotonia opening ceremonies.”

Erin Ciarimboli, a graduate student in the Institute for Higher Education, was the woman with the Pelotonia sticker. She and her husband, B. Noble Jones, had volunteered for Pelotonia while students at Kenyon College. The following summer, in 2013, they moved to Athens to pursue their PhDs and took up cycling.

Ciarimboli said the couple began riding in Pelotonia in 2014, when they realized cancer and cycling had intersected their lives.

“We had lost two very close members of (Jones’) family within four months of each other, so it’s our tribute to them,” she said. They, along with friends Charlie Carabello, a cyclist and cancer survivor, Henry Oddi, who worked with Carabello in the UGA admissions office, and Kenyon friend Adrienne Amador, now at Berry College, became the first team to represent UGA and the state in last year’s Pelotonia.

This year, they make up a UGA-based team of seven, and the group remains the only one representing the state and UGA. The team includes Amador; Ciarimboli; Jones; Oddi; Carabello; Heath; Michael Pinnegar, a software developer and Heath’s brother; former UGA professor Bradley Paye; and Rachel Burns, also a doctoral student at UGA’s Institute for Higher Education.

The group signed up to ride 180 miles as soon as registration opened, and the members have been training together since. They have sponsors, an updated logo and jerseys.

The connections made before the race, as well as the experience while you’re on the road, are life-changing, said Heath. Although one moment before last year’s Pelotonia solidified the experience for her.

“I went to pick up my jersey, and was excited to see it said ‘Survivor’ on the back,” she said. “As one of the 300 people volunteering to get people ready for the ride handed my jersey to me, she said, ‘We’ve got a survivor!’ Then all of them were yelling and cheering for me. I mean, I’m bald; I have no eyebrows; I had chemo that day. Having their support and hearing their enthusiasm reminded me that I was powerful, that I could do this. And then riding 25 more miles than I planned? Riding reminded me that so much of my body was still healthy and whole.”

Last year, Heath returned from the race in time for the start of the fall semester, but had also lined up a substitute for the final phase in her battle with cancer—a rib resection surgery. Her oncologists were worried the cancer had spread to a spot on her rib, but surgery revealed the spot was benign. Despite the intensity of the surgery, she was back to teaching weeks earlier than expected.

“And I know it was because I was thinking about Pelotonia and not the surgery,” she said.

‘I’m not done being a mom’
Heath’s own journey with cancer started just a year earlier, when she and her husband were trying for a second child. After having a miscarriage, Heath noticed a lump in her breast. Her doctor wasn’t too concerned, but when it grew larger, Heath immediately got a mammogram. She was 38 years old with a toddler.

They could tell, just by the mammogram, that it was cancer.

“Because I had no family history of breast cancer, I never thought it would happen to me; I was so not worried that I wouldn’t let my husband cancel his golf game the day I went for my mammogram,” she said. “I thought this strange tissue was connected to the pregnancy.”

While at the doctor, Heath also asked that they do one more test: To see if she was pregnant. That day she got two doses of news, one bad, one devastating.

Given how fast her newly diagnosed breast cancer was moving—fed by estrogen, she had no idea that her attempts to get pregnant were also feeding the cancer—Heath had a radical mastectomy and chemotherapy within months. She can no longer have children, but she is grateful for her daughter Vivian, now 4.

Heath has found many connections between herself and her fellow UGA Pelotonia team members-she and Carabello both have daughters named Vivian, for example—and as a mother, sometimes the connection seemed deeper.

“That’s the worst part of all this. I just can’t imagine my daughter growing up without me—nobody loves you like your mother,” she said. “She’s strong and she has a community, but I’m not done being a mom. I want to be with her as long as I can. … So it was really intense to be able to tell him, as a mother, I know she loved you so much and didn’t want to go.”

Pelotonia riders also find connections and community among strangers. Ciarimboli said there is a point in the ride, after you’ve gone about 60 miles, when you simply start chatting with the person next to you because it takes your mind off the long haul.

“You get to hear everybody’s stories and why they’re involved. In some ways they are similar but they are also incredible to hear because they are also different.”

There are connections all around us, she added, but not everyone talks about them or realizes them. With cancer, many people simply think it can’t happen to them—yet more than 75 percent of women with breast cancer have no family history of the disease, according to the National Breast Cancer Coalition.

Heath wants others to know that it’s OK to talk about it—either with her, with friends, or any of the many organizations that are here to help. The team also encourages others to join the fight against cancer by riding, virtual riding, or making a donation.

“Pelotonia helped me to see that we need each other to survive and fight cancer.”

For details and to keep up with the team, visit facebook.com/georgiamidnight