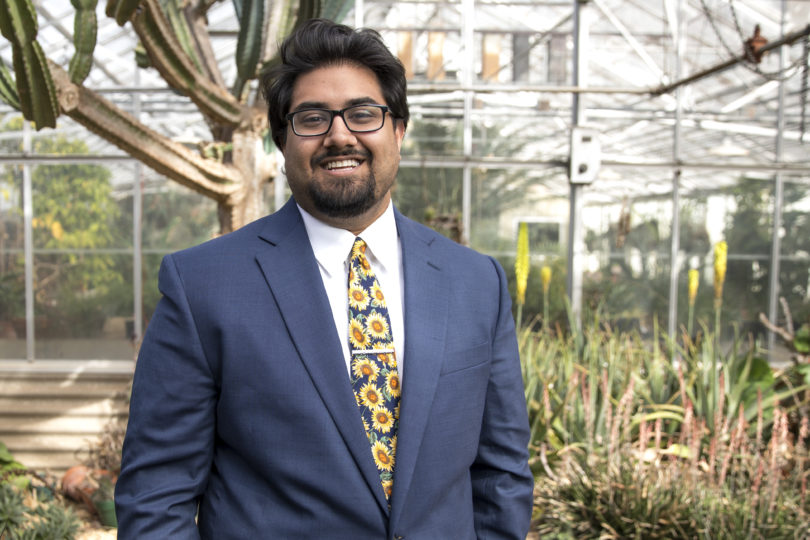 Rishi Masalia is a co-founder of the Athens Science Café. (Photo by Chad Osburn/UGA)

Rishi Masalia, a Ph.D. student in plant biology, is passionate about science and has been working to communicate to the public an understanding of science and technology and facilitate a dialogue between the university and the community for science endeavors. His academic focus is on the universal need for water and its ripple effect on food production.

Two of my cousins have attended UGA. One graduated a few years ago, while the other is set to graduate this May! Both will have Bachelor of Science degrees.

Bachelor of Science from the University of Arizona

Hailing from the Arizona desert, I have a passion for water (most notably the lack of it), and it’s this passion that led me to the University of Georgia in pursuit of a Ph.D. in plant biology. While I considered focusing my career on medicine or law, the universal need for water and its ripple effect on food production has driven my research toward the interplay of drought and agriculture, trying to not only answer the question of “can we feed everyone,” but also devising a way to do so. I don’t have the answers yet, but a lot of us in the scientific community are working on tackling this important issue. At the end of the day, water is fundamental to life and though my impact on the field is inherently immeasurable, I’m proud to actively pursue a solution to this global problem. To that end, I have published scientific papers, received awards and grants, and have given numerous scientific talks at local, state, and national conferences on my research.

When I’m not in the Miller Plant Sciences building working on my research, I’m a fairly active citizen on campus and within the Athens science community. I love science outreach and education, and have dedicated much of my free time to increasing the public understanding of science and technology through numerous outreach organizations. Thus far, I’ve helped co-found the Athens Science Café and Science Athens as community organizations to better bridge the town and gown line and facilitate a dialogue between the university and the community for science endeavors. On campus, I’ve helped start the Athens Science Observer and SPEAR, two organizations that encourage students to become involved in science communication and policy. I have also been involved with the Plant Biology Graduate Student Association for a number of years, and helped establish the inaugural Graduate Professional Student Association Integrative Research and Ideas Symposium and STEMzone outreach event, both in 2017. In addition to establishing organizations and events, I have developed curricula for a few UGA courses, most notably introductory biology labs.

Through travel awards from UGA as well as other organizations and sources, I have been able to present my research and outreach work at numerous conferences including the American Society for Plant Biologists meeting. Through those meeting connections, I was asked to serve as ASPB’s Graduate Student Ambassador for the Southeast United States, which I have done since 2015. I now volunteer as a science communicator on ASPB’s behalf and have thus far interviewed over 50 prominent plant biologists, with my work being showcased on an international scale. Finally, I serve as the sole graduate student representative on the Plantae steering committee, an online global community and knowledge hub housing content, discussions and resources created by plant scientists for plant scientists.

For this work and more, I’ve received numerous awards and honors. The ones I am most proud of are the 2018 K. Patricia Cross Award, a national award that recognizes future leaders in education; the 2017 Department of Plant Biology Duncan Award, which honors the most-well rounded graduate student in the department; a finalist in the 2016 UGA 3 Minute Thesis Science Communication Competition; an Outstanding Teaching Assistant award in 2014; and finally a Rosemary Research Grant Award from the Society for the Study of Evolution in 2013. I’ve also been named into the UGA chapter of the Blue Key Honor Society, and once was given the opportunity to present my research to the University System of Georgia Board of Regents.

I was fortunate in choosing UGA to further my education. Georgia has been quite good to me, and I have received immense support and encouragement from the university student body, faculty, staff and surrounding Athens community. The atmosphere here is very welcoming, and I am proud to be a member of this amazing family and, of course, the Bulldog Nation.

The Department of Plant Biology here at UGA is one of the best in the nation. Simple as that.

… coffee with the lab

At a Phoenix Peter Piper Pizzeria I stood on a table and sang “Achy Breaky Heart” by Billy Ray Cyrus to a puzzled but polite audience of pizza patrons. As the restaurant staff gestured for me to get down from the table, I remember feeling both elated for recalling the words but also embarrassed by the subpar performance. I was 7.

Although not necessarily interesting or flashy, my honest answer is that I like to study in my office in Miller Plant Sciences.

There are many UGA faculty that I think are amazing, so choosing one or even a handful is difficult. Drs. John Burke (my Ph.D. advisor), Lisa Donovan and Kris Miller absolutely make this list, and are few of the many faculty members who have directly shaped my research and teaching aptitude. I’d also like to acknowledge Drs. Jenna Jambeck and Marshall Shepherd, who have inspired me through their steadfast commitment to scientific outreach.

Living? I’d like to have lunch with President and first lady Barack and Michelle Obama. They have been an inspiration to me since college, and I would love to pick their brains on global challenges and how best to solve them.

Dead? I’d love to meet Hedy Lamarr. While she is most famous for her acting career, I’d like to talk with her about her inventions, most notably her design for a spread spectrum radio frequency-hopping system developed during World War II. This technology would later galvanize the digital communications boom of the late 20th century and contributed to the development of GPS, Bluetooth and Wi-Fi.

… design, implement, and execute a plan to improve freshwater access, distribution and sustainability for current and future generations. Given the ubiquitous need for water, this endeavor would require shifting human tendencies toward more sustainable practices, international cooperation through water treaties/agreements, and better investment in technologies such as desalination, genetic engineering of crops and water reclamation centers. (Hey, I couldn’t fail, why not go big?)

See above response. Changing humanity’s sustainability paradigm is probably easier to accomplish with an unlimited budget.

I have two driving passions. (1) I’m passionate about water scarcity and its ripple effect on food security. It’s the reason I study agricultural drought, and the topic I love speaking with the public about. (2) I’m passionate about increasing science literacy and sharing science with the public. I believe that everyone should have access to education, especially the sciences, and I work very hard within our community to establish opportunities for those seeking to learn.

Short term, work as a post-doc. Long term, I want to pursue a career revolving around science communication, whether that’s science journalism, writing popular science books, or professionally creating and sponsoring outreach events for the public — something that involves increasing science literacy and talking to the public about how science and technology impact, and will continue to impact, their lives.

There will be many UGA/graduate school experiences that I will remember fondly, like the first time I rang the Chapel bell, publishing my first scientific article, and of course, finally walking through the Arch. However, as of right now, an experience I’ll always remember took place on Feb. 25, 2014, in downtown Athens. It was the first Athens Science Café lecture, which for those who aren’t familiar, are free to the public science conversations about interesting topics that allow the public to directly ask questions to those most informed to answer them, the scientists. We were nervous because it took five months of planning, grant writing and advertising to get us to this night, and to our knowledge Athens had never hosted an event like this before. In a night that totally could have failed, we witnessed a standing-room-only crowd LOVE a general science lecture on psychology. This was the day I knew I wanted to be engage with the public on scientific topics for more than just an evening. Four years later, the Athens Science Café is still going strong; but more than that, our work directly inspired other cities in Georgia to start their own cafés. To me that night, and more specifically that feeling of making a difference, is what inspires me to this day, and it’s an experience that will always stay with me.