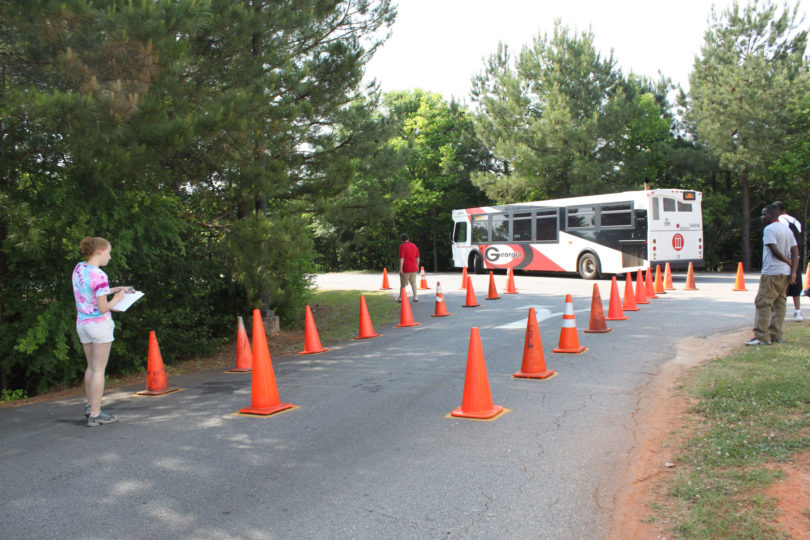 It was his 17th. The veteran Campus Transit bus driver took the wheel of a red and black 2006 Orion VII bus and navigated through barrels, tennis balls and dozens of orange cones to score 40 points higher than his closest competitor and win the annual Campus Transit bus roadeo.
Held May 13 at the Campus Transit facility on Riverbend Road, the roadeo tests driving and safety skills. It’s been held every year since 1992.

“It’s our end-of-the-year, fun event that we do to help send our graduating seniors off and lets our drivers demonstrate their abilities,” said Ron Hamlin, manager of Campus Transit. “The drivers have a tough job every day driving on the streets on campus, with all the tight turns, bicycles, pedestrians and scooters.”

The bus roadeo consisted of three main events. The competitors-15 student and full-time bus drivers out of Campus Transit’s more than 120 bus drivers-had a written test on safety. The second part was a pre-trip vehicle inspection where they had to spot anything wrong with the bus. For this exercise, the bus had a tail light out, a hazard light was out, the CB radio was missing its microphone, a mirror was gone and there was a loose handrail. Drivers perform these kind of inspections every morning before they begin their routes.

The bulk of the competition was a 10-station obstacle course that the driver had to complete in less than seven minutes. A race flag was lowered and then drivers had to back into a marked stall from both the left and right, drive through an off-set street, drive through a zig-zag course of marked barrels, make a sharp left-hand turn, a right turn, drive through a field of tennis balls testing whether they knew where the buses’ rear tires were, drive through barrels as narrow as six inches from the bus on each side at 20 miles per hour and then make a quick stop and a passenger stop. In addition three judges rode on the bus with the driver and scored each competitor for safety habits, ride smoothness and total time.

Many bus drivers who weren’t driving routes that day were judging the obstacles or cheering competitors on. After the event, the department had a picnic, and the winners were announced.

Finishing second and third were Daniel Wade, a student operator, and Sara Hudspeth, a full-time bus driver, respectively. In years past, the top three roadeo finishers have gone on to participate in state and national competitions, but because of the economy the state competition hasn’t been held for the past few years, said Hamlin. This year-in addition to bragging rights-winners will have their names engraved on a plaque in the lobby of the Campus Transit building.

Baker, who drives the Family Housing route and has more than 20 years of experience, has won the UGA event eight times. He’s even won the state event before and placed in the top four an additional six times. He says he’s competitive and looks forward to it.

Baker said the competition is a lot of fun, but that it’s a little different than driving cautiously through campus, when driving 20 miles per hour through a crowded parking lot would not be allowed.

Even Hamlin took a turn driving a bus through the obstacle course after everyone else was done. With a name sign that read “the man,” and Run DMC playing on the speakers, Hamlin, finished the course and scored perfect on the hardest obstacle. Hamlin has more than 10 years experience as a bus driver and more than 30 years total in transportation. Lately his hours haven’t been behind the wheel and he said he hadn’t driven the course in about five years. “I usually drive a desk,” he joked.