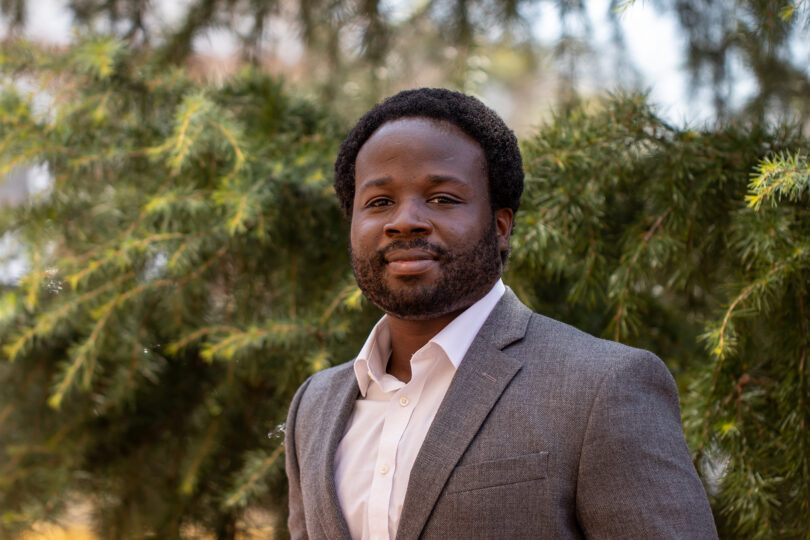 Named to Forbes ‘30 Under 30,’ the UGA alumnus is ‘seeking to expose new fundamental principles of chemistry’

“The thing about synthetic chemistry that I really love,” said Robert Gilliard, who earned his doctorate from the University of Georgia in 2014, “is being able to make molecules that the world has never seen before. When you develop new fundamental chemistry, you inevitably discover significant properties you never could have predicted.”

Gilliard, who is currently assistant professor at the University of Virginia, first became known for his work at UGA on the silvery-white metal beryllium, which is used in alloys to increase the electrical conductivity of copper or nickel.

“Beryllium is the fourth element in the periodic table,” explained Henry Schaefer, director of the Center for Computational Quantum Chemistry at UGA, and a person Gilliard considers an inspiring mentor. “Beryllium is dangerous, potentially cancerous, and its chemistry is not well known.” At UGA, and more recently at the University of Virginia, Gilliard and his colleagues were able to create a stable form of beryllium that can also carry out completely novel chemistry, and has been hailed as a remarkable achievement.  The new version of beryllium might, for instance, be utilized to help speed reactions in semiconductors. As Schaefer concluded: “Robert has great insight into the possibility of entirely new chemistry of broad interest, and then he goes into the lab and actually makes it.”

Not surprisingly, Gilliard has amassed an astonishing number of awards, grants and honors at a young age. He still remembers his surprise when he was named a Forbes ’30 under 30’ in 2016.

“It was a complete shock,” said Gilliard. “I was working in what is known as the glovebox in my laboratory, where we run our chemical reactions. I kept hearing my phone go off at my desk outside, chime after chime after chime, so I finally went to look. And there were emails from around the world congratulating me about this honor I didn’t yet know I’d received.”

Since that time the now 35-year-old chemist has received many other honors, including a prestigious Sloan Research Fellowship, which provides support for the general functioning of his lab and is one of the most coveted awards for early-career scientists. He received a grant from the Arnold and Mabel Beckman Foundation’s Beckman Young Investigator Program for his work with temperature-responsive molecules.  He received a CAREER award from the National Science Foundation. He has been a Dr. Martin Luther King Visiting Professor at the Massachusetts Institute of Technology. In fact, MIT’s Christopher Cummins says he has been inspired by Gilliard’s approach to chemistry. “I’ve always been so happy at MIT that there’s space for people like me and Robert who look at science as an outlet for our creative juices. He’s seeking to expose new fundamental principles of chemistry.”

Gilliard has also been named one of 20 Packard Fellows for Science and Engineering by the David and Lucile Packard Foundation. Packard fellowships are designed to allow flexibility and freedom for researchers. As a Packard Fellow, Gilliard will receive $875,000 over a period of five years to conduct his research.

In 2021, the National Academy of Sciences selected Gilliard as a Kavli Frontiers of Science Fellow. Kavli Fellows are scientists who have already made significant contributions to their field and have been identified as future leaders. That same year, Gilliard’s Ph.D. adviser at the university, Gregory H. Robinson, UGA Foundation Distinguished Professor of Chemistry, was elected to the National Academy of Sciences.

Today, Gilliard’s work focuses on earth-abundant elements of the periodic table such as boron, phosphorus, bismuth and magnesium. He is working to try and tweak these common and inexpensive metals, so they can do some of the remarkable things that we currently rely on expensive and rare metals to perform. These everyday metals are often neglected by researchers. One major focus is engineering these earth elements to emit light or change color, perhaps in response to changes in temperature. This research could have lots of applications, says Gilliard. Soldiers’ uniforms could change color to help camouflage them wherever they are. Packages could change color if the temperature gets too warm for what is inside—such as a vaccine that needs cold storage or certain foods.

Another major focus is to tweak these elements so they can more easily catalyze reactions.

He is also working on versions of these elements that might help to stabilize carbon dioxide in the atmosphere and perhaps slow global climate change—and be cost effective.

“The synthetic chemistry involved is difficult,” he explained, “and that’s what typically prevents people from trying to do this.”

Gilliard said the most important work his lab is now doing is work on the optical properties of boron- based materials. “I have 17 people in my lab, and all but a few of them are working on this.” Their hope is to advance the technology of organic LED displays used in televisions, computer screens, smartphones and tablets. “Most displays have very expensive components such as gold, and we are trying to make luminescent compounds that mimic the properties of those costly elements.”

Tweaking and inventing new compounds in order to reduce costs is a theme running across all his work, said Gilliard. “That is one thing that sets us apart.”

Gilliard looks back on his days at UGA with great fondness. “Both UGA and the city of Athens are rare places, because there is such a strong sense of community. And there was a seamless relationship between the university campus and the city itself.” For instance, he said, he and his chemistry buddies would go to a popular eatery, Kelly’s Jamaican Jerk, almost every day. “We’d go there to hang out for lunch or dinner. The people were great. And when I graduated, the owners bought me gifts to celebrate.”