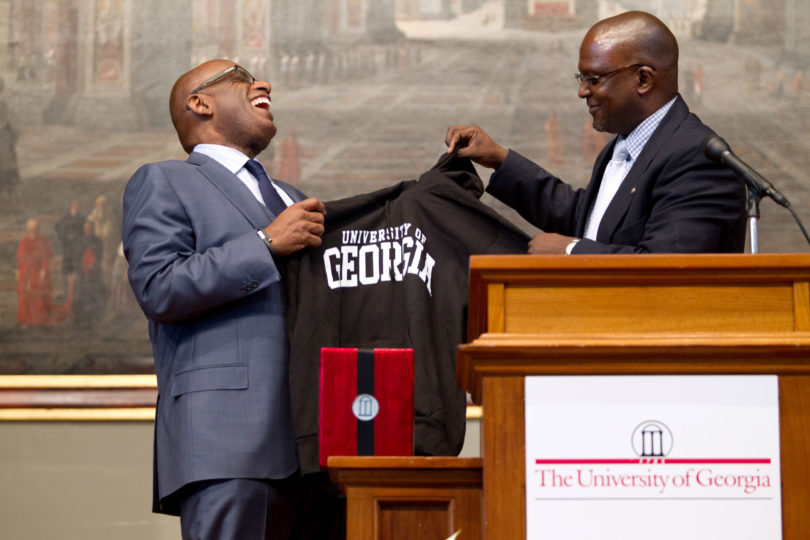 Television host and weatherman Al Roker entertained an audience at the Chapel with jokes and anecdotes about his career on April 25 for the 28th annual Holmes-Hunter Lecture.

Roker, host of the Weather Channel’s Wake Up with Al and weatherman of the Today show, shared stories about his rise to become America’s most famous weather forecaster, while keeping the audience chuckling at his comical asides.

The Holmes-Hunter Lecture has been held annually since 1985. It focuses on race relations, black history and education with implications for inclusion and diversity. The series is named in honor of Charlayne Hunter-Gault and the late Hamilton Holmes, the first black students enrolled at UGA.

Roker began his lecture by admitting he was something of a stranger in SEC football country.

Roker, who is married to UGA alumna and ABC news correspondent Deborah Roberts, shared how he unwittingly bought a Georgia Tech Yellow Jackets baseball cap and took it to his in-law’s house much to his wife’s dismay.

“She looked at me like I’d just kidnapped the Lindbergh baby and asked me, ‘What are you wearing?’ ” he recalled.

From then on, he told the audience, he learned not to bring “an angry bee” into the house.

Roker also shared that at the time he launched his career in television in the 1970s, there were few African-Americans on the air. Roker recalled there was concern from management at the small TV station where he got his first weatherman gig about the public’s reaction to an African-American appearing on the news program.

After his first appearance, the station expected the telephone switchboard to light up with angry calls, but it did not.

“I’ve found this time and again in the business,” he said, “that management is usually far behind what the audience wants, desires and will tolerate.”