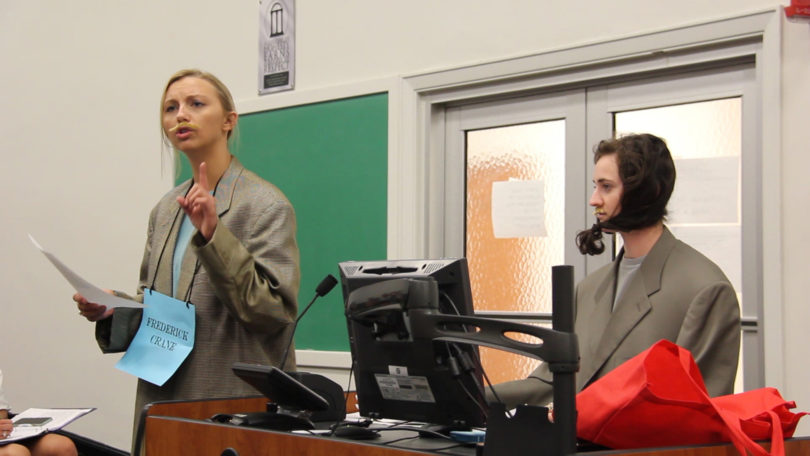 The giddy energy circulating through the auditorium of the college lecture hall make the “People, Parasites and Plagues” class feel more like an elementary school play than the large science course that it was.

While delivering speeches about a cholera outbreak, some students—including some of the women—are sporting fake mustaches and employing accents that sound like they just finished watching a Harry Potter movie marathon.

The students are offering hypotheses for the outbreak. Some blame “bad air”; others claim the disease is spreading through blood. Both the outdated and reasonable arguments draw a mix of cheers and jeers from classmates, including some shouts of “pish posh” and “hogwash.”

The fun and game have a purpose, said Julie Moore, a professor of infectious disease in the UGA College of Veterinary Medicine.

“The exercise for the students is to really explore these different historical viewpoints of disease,” Moore said. “It’s an opportunity for them to really understand the basis for this kind of (scientific) controversy and gain an understanding of how our concepts of disease have really changed over time.”

The game is part of a pedagogical strategy called Reacting to the Past, which places students in the role of historical figures at a pivotal moment in history. In each of these games, there are arguments to be made, compromises to be struck and decisions to render.

Reacting to the Past has been around UGA for decades but is undergoing a revival in UGA classrooms—especially in science, technology, engineering and math courses—as a way to get students to think more deeply about complex material.

Naomi Norman, Meigs Professor of Classics and co-director of UGA’s Reacting to the Past Program, said Reacting to the Past creates “a very dynamic classroom,” where students not only participate but get emotionally invested in the material. Norman recently was named UGA associate vice president for instruction.

Reacting to the Past pedagogy originated in the history department of Barnard College, which may explain why many of these games revolve around the kind of lessons learned in high school social studies and history classes, like Plato’s Republic or the French Revolution. However, increasingly games examine historical debates in science and health care policy.

For each game, instructors assign roles. Students must research historical figures, write speeches and collaborate—or conspire—with other students outside of class. The students’ goal is to “win” the game in class, or have their historical figure’s goals realized.

Sometimes the instructor gently prods the class to keep conversation moving and encourages students to negotiate deals with other classmates in and out of class. But mostly, the instructor lets the students lead and watches the game unfold.

One lesson from Reacting to the Past is that history does not always repeat itself. Sometimes the Loyalists win the day in revolutionary New York City; sometimes Octavius fails to become Caesar Augustus; in the case of the game in Moore’s class, sometimes London government officials don’t replace the pump that led to the cholera epidemic.

“It’s the clearest way I know to show history is not linear,” Norman said. “It could have turned out differently.”

But Reacting to the Past is more than a lesson in historical perspective.

Fausto Sarmiento, a geography professor in the Franklin College of Arts and Sciences, said the game also helps students learn how to construct an argument.

“Intellectually, students are encouraged to fight with ideas,” he said.

Sarmiento, who was named the inaugural UGA Reacting to the Past Fellow in 2014, is teaching an honors geography course this fall that will use a game based on the Copenhagen Accord, an agreement made among nations in 2009 to lower emissions in order to slow climate change.

Students won’t just play the role of scientists; some will be politicians and economists vying for a voice in climate change policy.

“In the real world, environmental policy isn’t only made by scientists,” Sarmiento said.

Reacting to the Past fits nicely into the Center for Teaching and Learning’s recent emphasis on active learning and flipping the classroom. A flipped classroom is a pedagogical strategy in which students first experience exposure to concepts prior to coming to class and, once in class, instructors assist students as they deepen their learning through specifically designed activities.

“In the world of higher education teaching and learning, one of the most talked about pedagogical strategies today is flipping the classroom. That’s what Reacting is,” said Chase Hagood, assistant director of faculty development and recognition at CTL. Hagood was recently named co-director of UGA’s Reacting to the Past Program.

This summer, Hagood will lead a game for graduate students and faculty revolving around the question of religious freedom in colonial Massachusetts. Reacting@UGA, a group of faculty dedicated to the pedagogy, and CTL will host the Reacting to the Past Game Development Conference and Newbie Day July 15-18 in the Miller Learning Center to expose new faculty to Reacting to the Past and work with experienced Reacting faculty across the country to create more games for students.

Faculty who use the pedagogy insist the game is not just good for students, but it also changes how faculty think about teaching.

“It reinvigorates us as instructors,” Norman said.

Back inside the Veterinary College auditorium, class time has ended. In a typical class, students would probably be rushing out the door to the next class. But in this class, even as students remove the fake mustaches and ditch the British accents, they still are talking about cholera and still trying to find an edge to win the game.