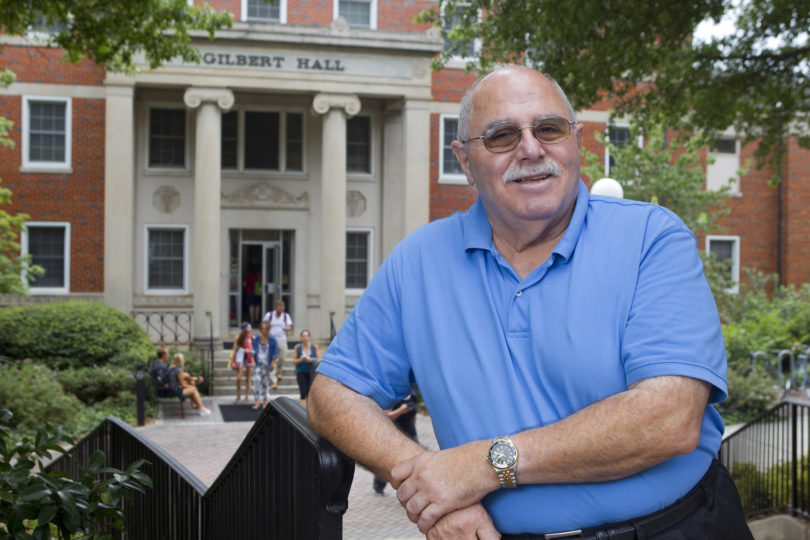 Francis Assaf has introduced generations of students to the joys of the French language and culture for three decades.

As the longest serving faculty member in the Romance languages department in the Franklin College of Arts and Sciences, Assaf has witnessed the program evolve as he has continued to find new ways to engage his and his students’ intellectual curiosity and scholarship.

“I’ve seen a lot of changes in the department and at the university over that time,” said Assaf, Distinguished Research Professor of French. “Romance languages has become much more dynamic and younger, both which will continue to serve it well.”

After a youth spent in the Cairo suburb of Heliopolis, Assaf completed his studies in France and worked in Beirut before moving to California, where he worked for two years in the insurance industry. He completed his advanced degrees at the University of California, Berkeley, and arrived at UGA in 1981.

“I was still fairly new and somewhat unsure of myself as an assistant professor,” Assaf said. “Hired to teach nondramatic 17th century French literature, I had managed to publish two articles on 17th century subjects before my arrival.”

Realizing his own need for a peer group in his discipline, Assaf organized a conference at UGA in 1982 with the help of now-retired colleague Jim Davis. The Southeast American Society for French Seventeenth-Century Studies, renamed the Society for Interdisciplinary French Seventeenth-Century Studies, called its 32nd annual conference to order this past November in Long Beach, Calif.

“This past conference had the largest attendance in the history of SE17, with participants from as far away as Australia,” he said.

Having served for many years as chief executive as well as editor of the society’s journal, Assaf retains the title of founder and takes no small amount of pride in the fact that SE17’s current chief executive, Bowdoin College associate professor Katherine Dauge-Roth, began attending conferences when she was a graduate student.

“We have a contingent of graduate students who attend the conference to read papers,” he said. “There is no special session for graduate students-their papers are accepted or rejected solely on their academic merit.”

The journal, Cahiers du dix septième, which accepts work both in French and English, is now entirely online, with plans in place to make its content completely open-access.

From the beginning of his career, Assaf has maintained an active program of research. In addition to his three single-author books, several critical editions and scores of articles, he has read papers on three continents and lectured at several French universities. His current research and graduate teaching remains focused on 17th- and 18th-century authors, including Antoine Houdar de la Motte (1672-1731) and the author on whom he wrote his dissertation, Alain-René Lesage (1668-1747). Assaf is contributing to an edition of the complete works of Lesage for the French imprint, Honoré Champion.
In addition to these service and professional activities, having served in the academic senate at UGA as well as the University Council, Assaf teaches a First-Year Odyssey seminar on the civilization of ancient Egypt.

As a new professor whose arrival coincided with that of the computer age, Assaf was instrumental in helping the Romance languages department become more computerized. His continued engagement with that aspect of his professional life is one of the tools that keep him connected to his students and helps him lead them to so many new and wondrous places.

In 2002, the French government rewarded Assaf’s efforts to promote French culture in Georgia and nationwide with the medal of Chevalier dans l’Order de Palmes académiques, a decoration instituted by Napoloen to reward academic excellence. In 2007, he was promoted to the next higher grade, Officier.