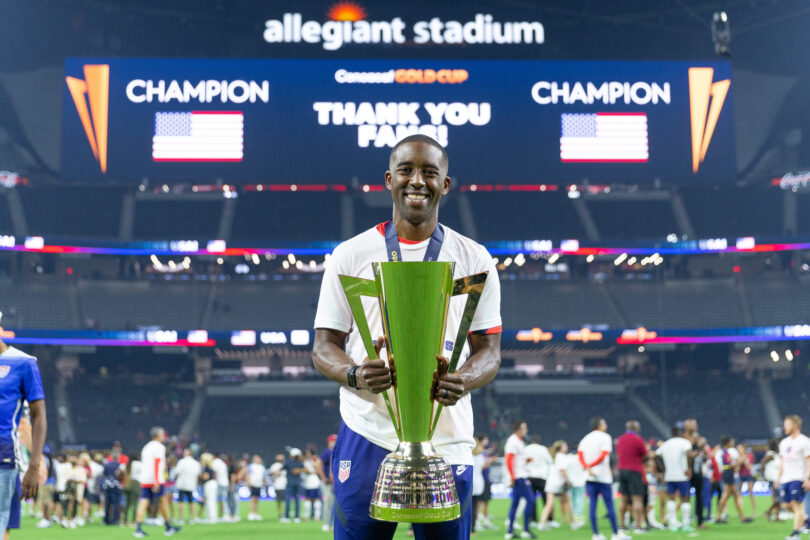 After failing to qualify in 2017 and then weathering the uncertainties of the pandemic, the U.S. Men’s National Soccer Team (USMNT) has punched its ticket for the upcoming Men’s World Cup. One of the leaders in the effort to make sure everyone is healthy is Ron Shinault, the team’s head athletic trainer.

Still, even a dream job comes with its challenges. This year’s USMNT roster has 27 players who represent clubs in 12 or more different countries. Only working with athletes in person a handful of times a year makes Shinault’s current athletic training job non-traditional to say the least.

Fortunately, his time at UGA prepared him for the unconventional.

Shinault’s professional journey began in a student sports medicine society meeting his freshman year. After hearing about an internship and interviewing with then-director of sports medicine Ron Courson, Shinault was hooked.

“I introduced myself to the student leading the meeting, Harris Patel,” Shinault says. “He told me there were volunteer and internship opportunities in the athletic department, and I said that’s exactly what I’m interested in doing.”

Shinault’s internship with UGA Athletics took him to the 1998 Peach Bowl, a summer internship with the New England Patriots in 1999, and the 2000 NCAA Women’s Tennis National Championship tournament that UGA won. He completed coursework in the mornings and conducted hands-on sports medicine training with UGA athletes in the afternoons.

“It was a bit of an atypical student experience, but it was great sports medicine experience,” Shinault says. “A lot of the people I worked with, I’m still connected with to this day.”

After graduating from UGA, Shinault earned a master’s degree in sports administration at Florida State University, then worked in athletic training at several universities and at the professional level. Working with the University of San Francisco’s men’s soccer team in 2006 is when the sport and its unique rehabilitation needs captured Shinault’s interest. His move to  Major League Soccer’s San Jose Earthquakes in 2015 brought that further into focus. 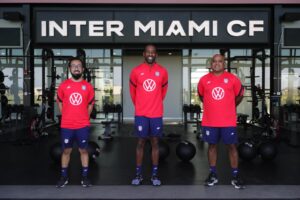 The USMNT’s training staff includes two Georgia Bulldogs: Ron Shinault (center) and Harris Patel (left). The pair met when they were students in Athens and reconnected with the men’s national team.

“In basketball, you can play three minutes of the game or you can play 40 minutes. In football, you can play 3 downs or 45 downs through open substitutions rules,” says Shinault. “But in soccer, most of your starters need to be able to play the whole game, so players returning from injury have to be healthy and 90 minutes fit.”

By the time Shinault began working with the USMNT in 2019, he knew soccer well. But the global scope of the national team was new.

A few times a year, the USMNT calls in players from around the world to represent the national team in games against other nations. The athletes leave their clubs to practice and compete in a challenging new environment with less-familiar teammates and coaches. One of Shinault’s goals is making the transition as smooth as possible.

He credits Courson, now UGA’s senior associate athletic director, for teaching him how to support his athletes—even from thousands of miles away.

“He said it really well: ‘People want to know how much you care before they care about how much you know,’” Shinault recalls.

That means getting to know the players—who they are on and off the field. Only once the players trust their athletic trainers will they listen to how to best rehabilitate their injuries and maintain their health and safety, he says.

Headed into the 2022 FIFA World Cup, Shinault will support players at their biggest tournament in almost a decade. And he won’t be the only Bulldog on the sidelines. Harris Patel BSEd ’97, the senior Shinault met at his first sports medicine meeting, is also on the USMNT athletic training staff and will join Shinault in Qatar.