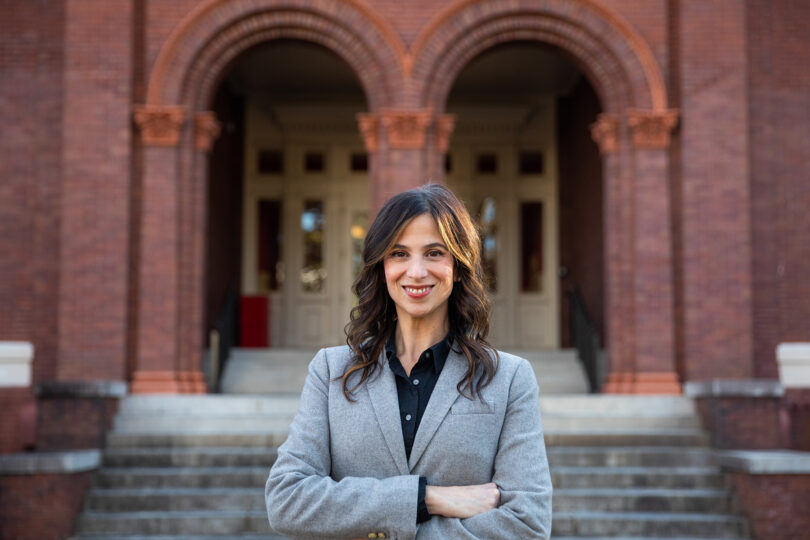 Rosa Arroyo Driggers, associate director of access and inclusion in the Office of Undergraduate Admissions, is one of the recipients of the 2022 President’s Fulfilling the Dream Award. (Photo by Chamberlain Smith/UGA)

Fulfilling the Dream Award recipient works to empower the next generation

Rosa Arroyo Driggers is all about people—working with them, connecting with them and motivating them. And through her work in the Office of Undergraduate Admissions, she’s doing just that.

“Students are my batteries,” she said. “They teach me more than I teach them.”

Driggers, associate director of access and inclusion in the Office of Undergraduate Admissions, is one of the recipients of the 2022 President’s Fulfilling the Dream Award. The award, presented at the annual Martin Luther King Jr. Freedom Breakfast, celebrates and recognizes students, faculty, staff and community members in Athens who work to fulfill the legacy of King through service and outreach.

“We all want what is best for others, and we all look out for each other as a community,” she said. “We can’t move the dream forward without a community, so part of my job is to nurture and build that community. It’s really creating a team of game-changers.”

That sense of team drew Driggers to UGA at a young age. She grew up in Puerto Rico, but her father was a huge Bulldog fan, thanks to family living in rural south Georgia. When she started working in admissions at UGA 12 years ago, it was a way to honor his legacy. She began as an admissions recruiter, then moved to assistant director, and has been serving in her current role since 2013. During that time, admissions programming for access and inclusion has increased 301%.

That’s important because Driggers believes education is key to building a strong citizenry and a strong future for the state. That starts as early as middle school, and her programming helps young students across Georgia know and understand the opportunities that exist through the university.

“Without a sense of belonging, you might be apprehensive to sit at the table,” she said.

Driggers is creating that sense of belonging through programs like the Goizueta Ambassadors, Road Dawgs and Gear Up 4 High School and College. She also helped create UGA’s first Latino/a alumni group and has established partnerships with public schools in Atlanta. Additionally, she has participated in the UGA Mentor Program.

Driggers finds a lot of inspiration for that work from students she interacts with each day.

“They are the ones who help me keep a pulse on some of their needs, what they look for in an institution, and any trends and changes,” she said. “I believe our students feel that they are part of the process—that they’re not just a number.”

Her work extends beyond UGA to the larger community. For example, she participated in LEAD Athens in 2017 and served on the Presidential Task Force on Race, Ethnicity, and Community.

“I’m a lifelong learner, and curiosity is my compass,” Driggers said. “Every single walk of life and every single different world view—that just adds and enhances.”

The Fulfilling the Dream Award is just another indicator that her work is making a difference.

“Being a recipient of the President’s Fulfilling the Dream Award is a true honor. It is an honor for me, and it is an honor for my office. It is a testament that we are serving the students of our state,” Driggers said during the virtual event. “At UGA, this award, for me, means we are doing everything we can to create a sense of belonging in Bulldog Nation.”