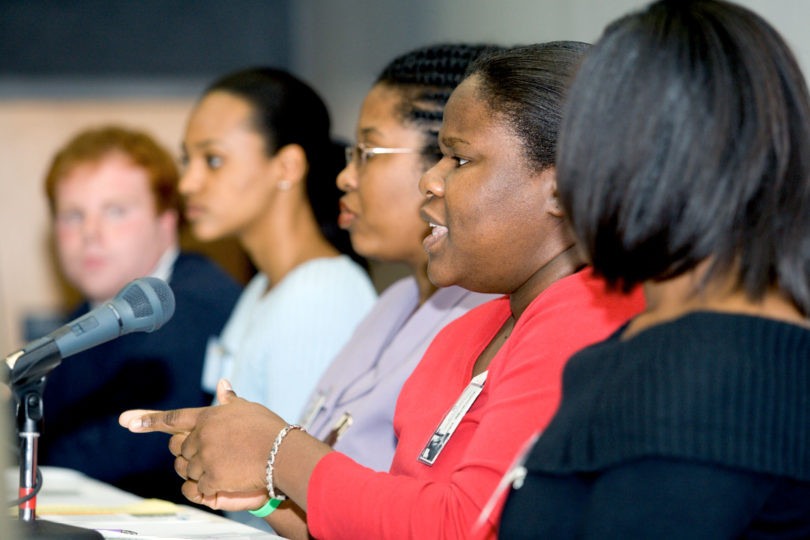 Panelists were (from left): Hank Clay

A Feb. 6 commemoration of the life of Rosa Parks began with student panelists’ reflections on her role in the civil rights movement and ended in a spirited discussion on the university’s state of diversity.

Dubbed the “Mother of the Modern-Day Civil Rights Movement, Parks is famous for her refusal in 1955 to give up her bus seat to a white passenger. Her subsequent arrest and trial ignited the Montgomery Bus Boycott against racial segregation. She died this past October at the age of 92.

As part of Black History Month, students gathered at the Tate Student Center to recall Parks’s life and work. Antwawn Sheats, a first-year graduate student in school counseling in the College of Education, moderated a panel of six: Hank Clay, a fourth-year student in the school of public and international affairs; Nita Cousins, a second-year journalism student, also in the school of public and international affairs; Marian Higgins, a first-year doctoral student in student affairs administration; Kenya McKinley, a housing representative; Kimberly Smith, a third-year journalism student and ARCH Society representative; and Candace Williams, a third-year journalism major and editor of Infusion Magazine, the student-produced multicultural-themed publication.

Higgins spoke of the “quiet spirit, quiet strength” that Parks had as she moved from behind the scenes—where most women of the civil rights movement stayed until then—to the forefront.

Smith evoked some laughter as she encouraged the audience to imagine being forced to go to the back of the Orbit bus.

“It’s hard enough to squeeze through as it is,” she said. On a more serious note, she added that Parks’s “action on one bus led to a road called equality.”

Williams said that Parks’s legacy “represents the power of the individual.” She also urged her fellow students to carry on her work.

“We’ve become complacent,” she added. “But there are different aspects of racism that exist today.”

Indeed, that soon became the topic of discussion, as various audience members began questioning the small turnout for the event—approximately 50 people. Was it student apathy, some questioned aloud? Where were today’s leaders to move this generation to action—who is today’s Rosa Parks, others asked the panel?

“This generation is looking for leaders,” responded Sheats. “We’re watchers.” The key, he added, was to find the leader within.

Higgins also encouraged the audience to become leaders themselves, as “there is strength in numbers. Once one person makes a stand, (others) may feel more comfortable wanting to be part of a movement.”

“At the university, we live in such a microcosm,” said Clay. He acknowledged that one has to leave his or her comfort zone to seek out those who are different in order to “grow as a person.”

One white fraternity member questioned whether he’d be welcome in attending a diversity-related event and noted that uncertainty might keep some students away.

“We’re not going to turn anyone away,” said Ben Zhang, a member of the Student Government Association’s multicultural committee. “It’d go against what we stand for.”

Martha E. Wisbey, assistant director of institutional diversity, was pleased with the event.

“The turnout was smaller than expected but the conversation was rich and vibrant,” she said. “The exchange of ideas and the true wisdom shared was the ultimate goal of this event. What an impressive group of participants.”