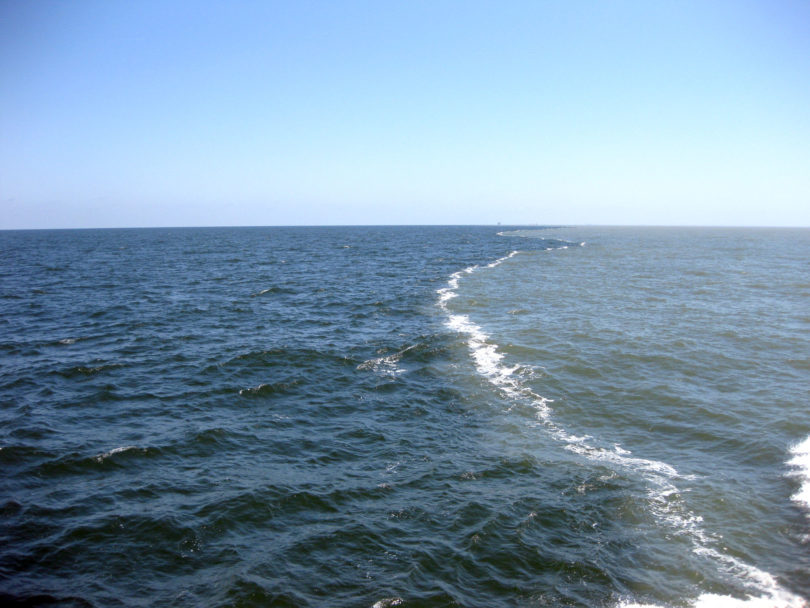 Algae-rich water from the Mississippi River feeds into the Gulf of Mexico. The green color of the river water on the right indicates a plume of phytoplankton

Athens, Ga. – Increasing acidification in coastal waters could compromise the ability of oysters and other marine creatures to form and keep their shells, according to a new study led by University of Georgia researchers.

Their findings will be published in the November 2011 issue of Nature Geoscience. The researchers determined the combined effects of fertilizer runoff carried by the Mississippi River to the northern Gulf of Mexico and excess atmospheric carbon dioxide from burning fossil fuels result in an unexpected increase in the acidity of Gulf waters.

When plumes of river water rich with nutrients from fertilizer run into coastal waters, phytoplankton thrives. When these algae die, they sink to the sea floor and decompose, releasing carbon dioxide and decreasing the amount of oxygen in the water. The dissolved carbon dioxide reacts with water, forming an acid.

Ocean acidity also increases when excess carbon dioxide released by burning fossil fuels is absorbed from the air at the ocean’s surface. The combination of these two sources of carbon dioxide decreases the ocean’s ability to neutralize acid, increasing acidity beyond what would be expected from the sum of the individual processes.

As the water becomes more acidic, sea creatures that form carbonate shells or skeletons—from single-celled amoebae to oysters to corals—are less able to produce and maintain these structures. If the acidity of coastal waters continues to increase, Cai and his co-workers predict that by the end of the century these creatures won’t be able to form shells.

“Many of our fisheries resources, especially shellfish, are concentrated in areas where rivers discharge onto the coast, like the northern Gulf and the East China Sea, and thus are at risk,” said James T. Hollibaugh, UGA Distinguished Research Professor of marine sciences. “And of course there are likely ramifications for fish and animals further up the food chain that depend on these same shellfish for food.”

Although their research focused on Gulf of Mexico coastal waters, they extended their findings globally by making the same measurements on the Changjaing (Yangtze) River, the largest river in Asia, where they found similar results.

To minimize future damage to the coastal ocean, Cai and his colleagues recommend that farmers better manage fertilizer use and societies limit fossil fuel use. Their future research will explore seasonal patterns of acidification and its influence on the coastal ecosystem.

For more information on the UGA department of marine sciences, see http://www.marsci.uga.edu/.