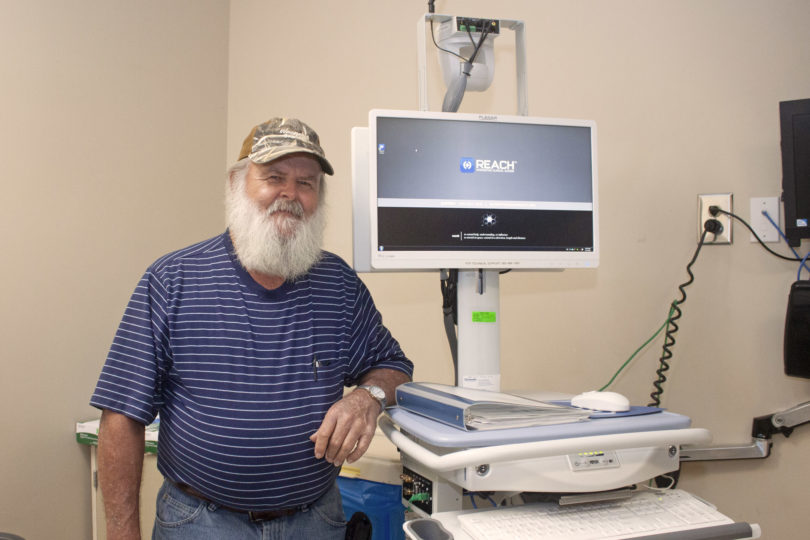 Dennis Hall stands next to the Remote Evaluation for Acute Ischemic Stroke (REACH) telemedicine cart that played a role in saving his life during an emergency visit to Emanuel Medical Center in Swainsboro, Ga. in November 2018. (Photo by Rebecca Ayer)

Dennis Hall gets up most days around 5 in the morning. As a carpenter and all-around handyman in his hometown of Swainsboro, Georgia, he likes to get an early start to his day. But one morning in November 2018, when Hall decided to take a mid-morning nap, he woke up feeling nauseous and dizzy, and he couldn’t stand up. His first call was to his doctor and friend Karen Butler.

“She told me to go ahead and call the ambulance,” said Hall.

When he arrived at Swainsboro’s Emanuel Medical Center, Hall remembers that he received a head scan and chest X-ray. Butler suspected a stroke, and she talked with him about taking a shot that would bust up his clot, which he agreed to do. Once he was stable, Hall was transferred to a stroke center in Augusta.

What he didn’t know was that Butler was on call that day at Emanuel, where she is the emergency department director, and the moment she hung up with him, she put a call out to the REACH Health network.

The Remote Evaluation for Acute Ischemic Stroke (REACH) program, also known today as the Augusta University Stroke/Telestroke Network, is a telemedicine service that connects rural hospitals with the Advanced Comprehensive Stroke Center at Augusta University where consulting stroke specialists are on call around the clock.

“In this setting, the emergency room doctor and their team of nurses – we’re it, so telemedicine is an invaluable tool for us,” said Butler.

Stacy Zhang, a health policy researcher at the University of Georgia College of Public Health, has been working with the REACH program to evaluate the effectiveness of telestroke not only in Georgia, but nationwide.

Distance is the issue
Emanuel Medical Center sees around 1,200 patients a month from Emanuel and surrounding counties. The next closest hospitals are in Augusta or Statesboro, both over a two-hour drive away. Augusta is the only option with a neurologist on staff. 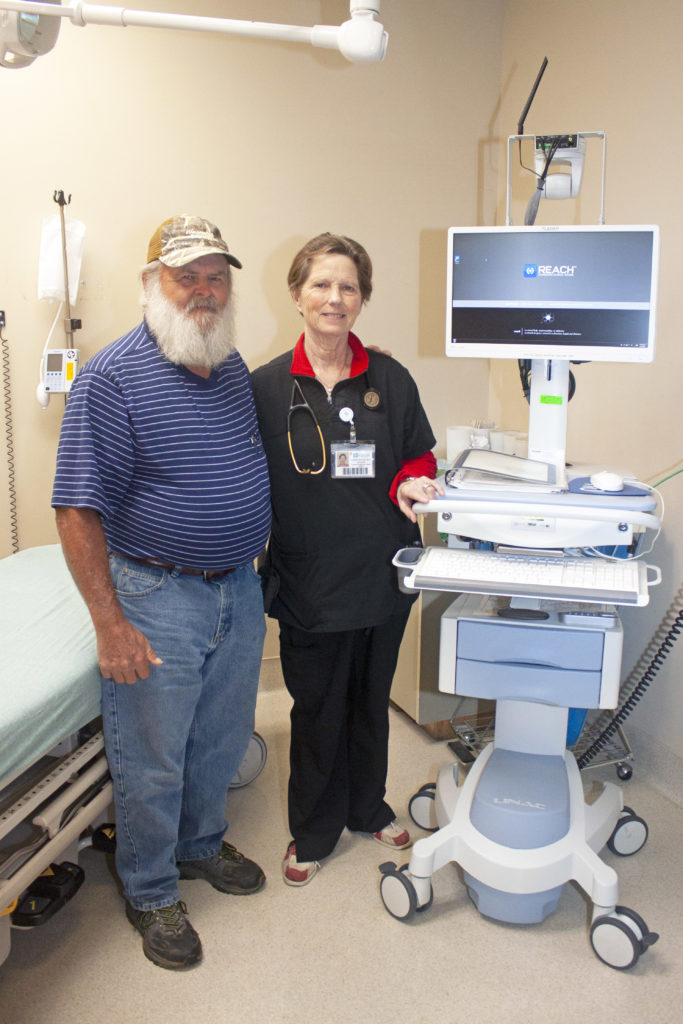 Dennis Hall and Karen Butler, a physician at Emanuel Medical Center in Swainsboro, Ga., stand next to the Remote Evaluation for Acute Ischemic Stroke (REACH) telemedicine cart that played a role in saving Mr. Hall’s life in November 2018. (Photo by Rebecca Ayer)

Though Georgia is experiencing a shortage of neurologists across the state, rural areas are especially hard hit.

“The problem with Georgia is that we’re such a big, spread out state that you just can’t get a neurologist to every location,” said David Hess, dean of the Medical College of Georgia and co-founder of the REACH Health program.

Launched in 2002, the REACH network now includes 31 rural site participants, and to date the program has given close to 10,000 consultations with rural providers.

Like other clinical specialties, stroke diagnosis and treatment require specific expertise, said Hess, and any hesitation or delay in treatment can sometimes result in paralysis or death.

He saw the need to innovate stroke care to fill in the existing service gaps, especially after the Food and Drug Administration approved tissue plasminogen activator, or tPA, in 1996.

tPA breaks down blood clots that occur during stroke, preventing further damage to the brain and other organs – but the drug isn’t always safe or appropriate for every stroke patient.

If a patient arrives too late, is age 80 older, or has had a stroke before, for example, there is an increased risk of hemorrhage, and many emergency rooms were reluctant to use tPA without consulting a stroke expert.

“After tPA was approved, we received numerous calls from rural hospitals to consult on tPA use,” said Hess. “We couldn’t see the patient. We couldn’t see the brain scan. We thought it would be good to come up with a way to eliminate those barriers.”

Using an internet connection and a computer monitor mounted on a rolling cart, neurologists could interact with stroke patients and remote emergency department staff

“Advanced technology by itself does not necessarily result in better care,” said Zhang.

Before coming to UGA, Zhang was a fellow at the Centers for Disease Control and Prevention where she studied research and evaluation strategies with the Division for Heart Disease and Stroke Prevention.

Her expertise in program evaluation and interest in stroke prevention made her work with REACH a “natural collaboration,” said Hess.

The first, a study appearing in Health Affairs, analyzed seven years of Medicare claims to learn what treatment patients received and how they fared in the weeks following their stroke.

Zhang found a correlation between the expansion of telestroke services nationwide with improved quality of care and fewer deaths due to stroke in very rural communities.

Dennis Hall may not have fully comprehended the risks associated with getting the tPA shot, but he didn’t hesitate in large part due to his trust in Karen Butler.

“In smaller, rural areas, there’s the trust factor,” said Butler. “My patients know they can call me anytime.”

And she appreciates that her hospital participates in REACH.

“I can tell you countless times, it’s meant the difference between life and death, or between full recovery and paralysis,” said Butler.

Hess is eager to see more hospitals take up telestroke, but he knows that will require more data-driven evaluations like the one Zhang conducted.

“You can’t live on anecdotes,” he said. “For policymakers, it’s important because it helps make the case for how much to invest in telestroke and who should be paying for it.”

The nuanced findings presented in Zhang’s national and Georgia-based studies illustrate that the current adoption of telestroke and other telehealth models may not be a silver bullet to improving health outcomes in resource-poor areas of the U.S.

“We assessed the impact of telestroke based on three outcomes – access to care, quality of care and medical cost. We can say telestroke did improve access to critical stroke care particularly for rural patients,” she said. “This is for sure.”

Hall knows telestroke helped him that day in November. The neurologist on call that day confirmed Butler’s instinct that Hall needed tPA.

“I believe without that shot, it might have been a lot worse,” he said.

After five months, Hall is walking normally and back at work. There’s no sign of the facial droop that affected the right side of his face, but he still can’t grip very well with his right hand.

“Some mornings are harder than others, but it’s getting a little better,” he said and smiled. “Better than the alternative.”