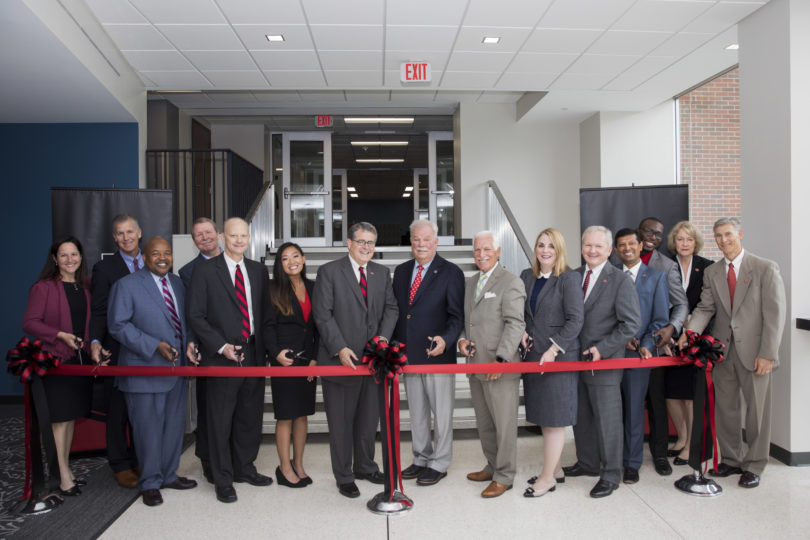 While the 1,000 new residents in University Housing’s Russell Hall may not have noticed the modernized climate control, plumbing and electrical systems when moving in for fall semester, they surely noted the flexible room furnishings and increased bathroom privacy as well as the numerous lounge spaces intentionally designed to encourage gathering and group interaction.

Following a 15-month renovation, the building opened to residents Aug. 5 with updated student rooms, bathrooms, lobby, lounge, programming, laundry and kitchen spaces. The building’s interior looks and feels brand new while still preserving some of the mid-century aesthetic that makes it unique, such as the original ­terrazzo floors in the lobby.

Interior designers used a color palette as well as iconic furniture styles and patterns inspired by the 1960s to carry a mid-century motif throughout the common area spaces.

“We’ve taken a building with good bones and transformed it to a modern-use residence hall that will stand the test of time for another 50 years,” said University Housing Director of Facilities Gary Thompson.

Throughout the renovation process, housing staff and project coordinators from Menefee Architecture and Cannon Design consulted student representatives to gain helpful insights on how students envisioned an improved Russell Hall that would fuel opportunities for planned and spontaneous interactions and create a supportive and inclusive environment for first-year students.

One example of student-­centered design incorporated into the building is expanded group study space. The third-floor study area adjacent to the laundry room is 3,660 square feet of comfortable lounge space, including soft seating, areas for small groups to gather and a large study room with space to seat a group of up to 12 students.

“The study spaces in Russell are the tangible result of Housing putting its mission into action to support residents academically,” said Residence Hall Director Ricky Kirby. “Students and their parents alike are already ecstatic about being able to utilize such sophisticated study spaces in the place they will call home for the next academic year.”

Partnerships with Dining ­Services and the Division of Academic Enhancement also provide Russell Hall residents with the most multifunctional building in Housing’s inventory. The Market at Russell, a convenience store open daily 7 a.m.-2 a.m., will offer pantry and food items to campus residents while the Russell Academic Center features public classrooms and study space that represent Housing’s focus on supporting residents’ academic success.

Originally opened in 1967 as an all-male residence hall, Russell Hall was rededicated Aug. 1. At the ceremony, Russell Hall resident assistant and former Russell Hall community council president Katherine Do, a third-year biology major, reflected on her time in the building before the renovation and remarked on her excitement about welcoming a new generation of Bulldogs in fall 2018.

“Our mission statement in the Residence Hall Association is ‘Where Housing Meets Home,’ ” she said. “The renovated spaces and new amenities will instill this ideal even further—showing residents that this is the place to grow and succeed.”