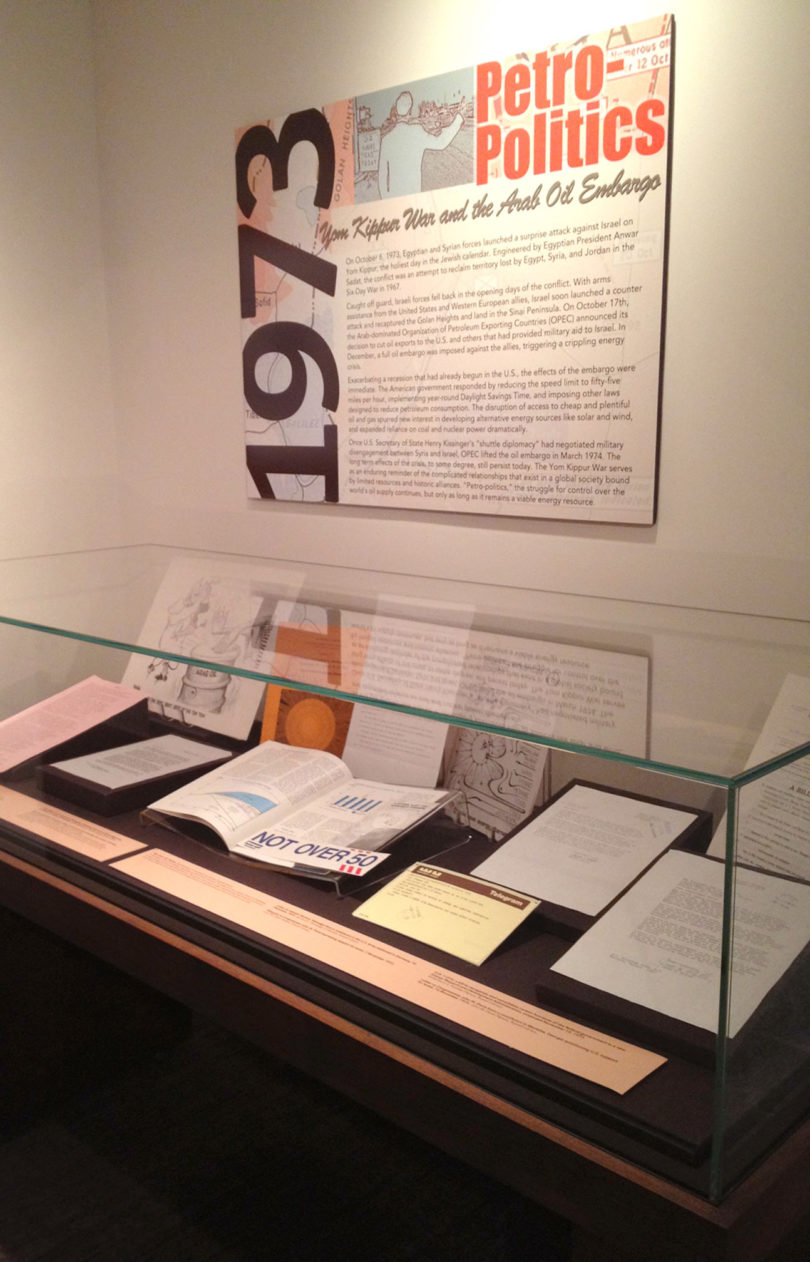 Athens, Ga. – The Russell Library for Political Research and Studies at the University of Georgia will look back at 1973, a pivotal year in modern American history with the new exhibition, “Now and Then: 1973,” on display in the Harrison Feature Gallery of the Russell Library gallery through Dec. 15.

The goal of the exhibition is to revisit, reflect and inform on past events for a better understanding of the present day, according to Jan Levinson, an outreach archivist at the Russell Library.

The exhibition explores the interactions of the legislative, executive and judicial branches of government and how the decisions made by each branch conflicted with one another, and with public opinion, in choosing a path for the U.S.

“We originally considered an exhibit focused exclusively on the anniversary of the Watergate scandal,” said Levinson. “But after some preliminary research found that there were so many big events happening in 1973 that touched on our key collecting areas, we couldn’t pass up the opportunity to take a look a multiple events.”

Both Levinson, who curated the exhibit, and Jill Severn, the Russell Library’s head of access and outreach, saw that the events of 1973 shared connections with current events and issues that Americans are struggling with today. “In creating the text and selecting objects from our collections, we tried to highlight the connections between past and present, as well as to prompt visitors to consider the interactions of various branches of government in dealing with public issues,” said Levinson.

The Russell outreach team will spend this summer planning a slate of public programs scheduled for the fall that will complement the key themes and topics of the exhibit. In the coming weeks they hope to launch an appeal to the public, soliciting photographs from 1973 for display in the gallery and on the Russell Library blog (www.rbrl.blogspot.com).

The Russell Library for Political Research and Studies is one of three special collections libraries at the University of Georgia. The galleries of the Special Collections Building are open free to the public weekdays 8 a.m.-5 p.m. and 1-5 p.m. Saturdays. For more information, contact Jan Levinson at jlevinso@uga.edu or 706/542-5788. To schedule a tour of the special collections libraries galleries, contact Jean Cleveland at jclevela@uga.edu or 706/542-8079.