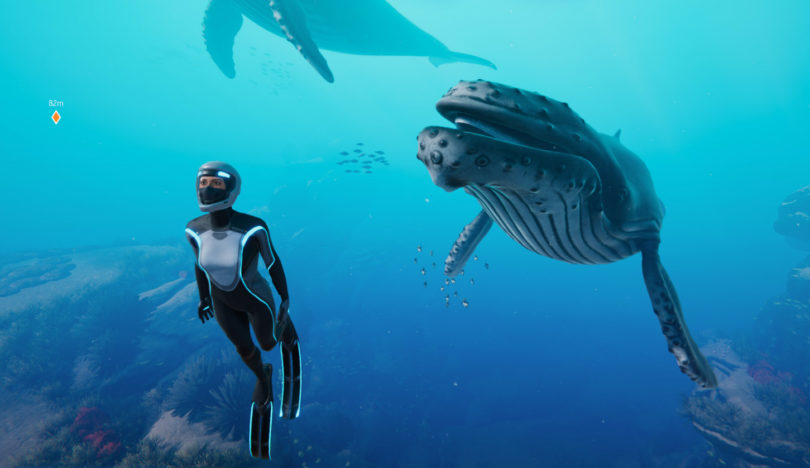 A still image from the video game "Beyond Blue."

In a gaming experience that takes players into the near future to explore the mysteries of the ocean, “Beyond Blue” is a new video game launched by E-Line Media in conjunction with the BBC and the researchers behind its “Blue Planet II” series.

The game allows players to become part of a new research team using groundbreaking technologies to see, hear and interact with the ocean in a meaningful way. University of Georgia Regents’ Professor Samantha Joye, a deep-sea oceanography expert who participated in the “Blue Planet II” documentary series, served as a consultant on “Beyond Blue.”

“’Beyond Blue’ is more than a video game. It’s an immersive tour through a fascinating and magical world that will leave you wanting to know more — and to do more,” Joye said. “The game will motivate all players to learn more about the ocean and for some, playing will inspire engagement in ocean advocacy. Surely some players will be motivated to pursue a career in ocean science.”

“Beyond Blue” presents players with the opportunity to explore the mysteries of the ocean through the eyes of Mirai, a deep-sea explorer and scientist, as she takes a deep dive with her research team to learn more about our otherworldly underwater environments.

The game features an evocative narrative and exploration of an untouched world. The company also published “Never Alone,” (Kisima Ingitchuna), a game that introduced players to little-known tales of native Alaskan culture. And while the effects of pollution and climate change are the theme, the E-Line team doesn’t want to go on a “soapbox,” said E-Line Media executive Steve Zimmerman. “We want people to start thinking about the world beyond what they see,” he said. “We know more about the surface of Mars than we do our oceans.”

Embracing the same collaborative development process that was used to create “Never Alone,” the company partnered with BBC Studios (developers of Blue Planet II), OceanX Media, world-class game makers, and some of science’s leading ocean experts. Included in the game are 16 minidocumentaries called Ocean Insights that feature original footage and interviews with these experts. Another fun element is the game’s soundtrack featuring an original score and music from Miles Davis, The Flaming Lips, The Edisons and more.

“Working with the E-Line team to ideate gaming scenarios and imagine futuristic ocean science technologies was an incredible and rewarding experience,” Joye said. “And this is only the beginning — Mirai and her team have a lot more exploring to do!”

Read more about Joye and her research.