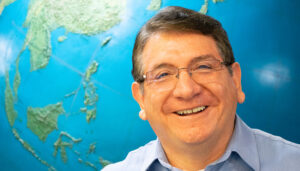 Fausto O. Sarmiento, professor of mountain science and director of the Neotropical Montology Collaboratory in the Franklin College of Arts and Sciences’ geography department, has received a Fulbright U.S. Global Scholar award to Austria, Japan and Chile.

The U.S. Department of State and the Fulbright Foreign Scholarship Board announced that Sarmiento will research and lecture at the Institute for Interdisciplinary Mountain Research of the Austrian Academy of Sciences, the World Heritage Studies UNESCO Chair of Cultural Heritage and sacred mountains at the University of Tsukuba in Japan, and the Institute of Environmental Sciences and Evolution, Laboratory of Territorial Studies of the Austral University of Chile in Valdivia, as part of a project to establish a worldwide network of montology, the convergent, transdisciplinary mountain science. Sarmiento will be researching and lecturing abroad for two months in each country, studying the graticule needed to expand geoecological work in altitudinal, longitudinal and latitudinal realities.

The Global Scholar award will be used to promote activities to montology by developing a global network of montologists working toward restoration of mountainscapes.

“With the networking facilitated by the award,” Sarmiento said, “my research goals will be enhanced by the establishment of a book series on montology, the launching of Urban Montology program as a joint effort, the integration of the sacred dimension in considering mountains as sentient landscapes and the strengthening of the disciplinary field with an international conference on montology at the Food and Agriculture Organization of the United Nations in Rome.”

As a Fulbright Global Scholar, Sarmiento will share the imperative of creating an Institute for Convergent Mountain Science with the establishment of a professional network for training and development of young scholars and graduate students on themes of tropical mountain conservation, implementing collaborative research for mountain sustainable and regenerative development, and engaging the general public in a better appreciation of decolonial mountain landscapes. In the United States and abroad, he plans to share new narratives about mountain science from transdisciplinary angles, offer guest lectures and focus workshops, prepare white papers and collaborative grant proposals on montological applications and push the prominent role of the International Geographical Union’s Commission of Mountain Studies as chair.

“Receiving the Fulbright Global Scholar award is an important recognition of my professional stature worldwide,” Sarmiento said. “I was already a Fulbrighter in 2004 when I was awarded an international education/research fellowship to Japan. Later, in 2009, I was selected as the first Hispanic faculty to the inaugural cohort of the Fulbright Scholar Ambassadors program.”

In addition, he has been a member of the campus selection committee at the Honors Program through the last decade to help select UGA student candidates for Fulbright Student Awards both in research and English teaching abroad.

“This year, however, receiving one of the most coveted awards empowers me to become a Global Scholar in pursuit of better convergent mountain science worldwide,” he said.