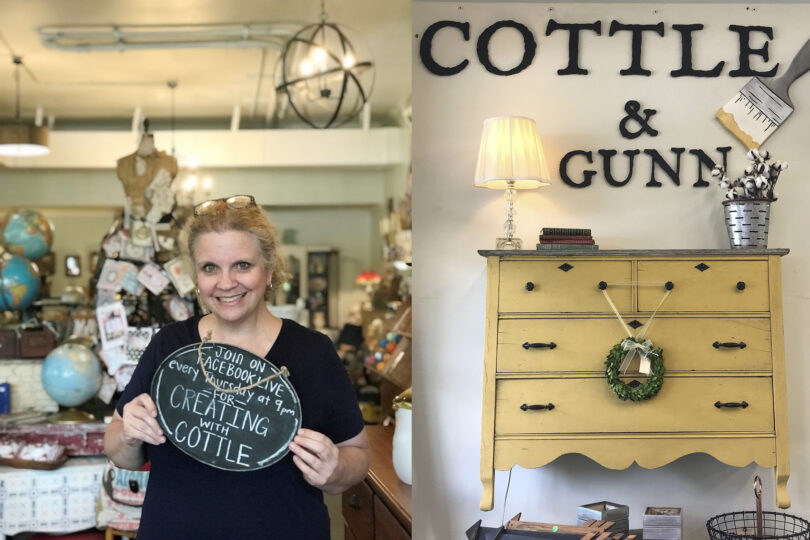 Cottle & Gunn in St. Marys, Georgia, closed its doors in April when the state’s shelter-in-place directives took effect. But the COVID-19 pandemic didn’t stop owner Deborah Cottle from doubling — then tripling — her sales from the previous spring, thanks to a creative outlook, a new online store, and some help from the University of Georgia’s Small Business Development Center.

Located just blocks away from the Florida state line to the south and the Atlantic Ocean to the east, St. Marys is home to about 17,000 people. Cottle & Gunn sits in the middle of the coastal town’s historic district, a fitting location for an eclectic store specializing in reclaimed vintage furniture, housewares, local crafts and more.

While the store itself is small, its online presence is anything but. Since opening her doors in 2014, Cottle has built an online following that nearly matches the size of the town — with more than 15,000 combined followers on Facebook and Instagram.

So, when the pandemic hit and businesses began closing their doors, Cottle tapped into that social media network — and her longstanding relationship with the SBDC — to keep her sales going.

“I’ve never worked harder in my six-and-a-half years of being in business than I did the month that I was ‘closed,’” Cottle said. “I maintained my normal business hours throughout the entire shutdown because my customers were constantly ordering for porch pickup. So even though they weren’t coming in the store, I was in the store every single day monitoring the online orders.”

Cottle’s sales for April 2020 were double that from April 2019. When she reopened in May, her sales tripled those from May 2019.

All of the growth was from online sales.

Assistance from the beginning

A longtime SBDC client, Cottle has worked with consultant Jordan Tippett since soon after she opened her store in 2014. She and Tippett have formed a close working relationship since then, communicating frequently via texts and phone calls about ideas to improve the business.

“[Deborah] is probably one of the hardest working clients that I have and has worked hard to get where she is,” Tippett said.

Over the years, Tippett worked with Cottle on a variety of ways to improve the business, from implementing QuickBooks software to keep her bookkeeping in order to helping her navigate the intricacies of buying out her partner and becoming the business’s sole owner in 2016.

“I don’t think I could have done some of these things without him,” Cottle said. “Sometimes you just need that little extra push. I would say, ‘I don’t know if I can do it,’ and he would just respond, ‘yes you can, yes you can.’”

Tippett had been pitching the idea of an online store to Cottle for years, but she resisted. She finally agreed to try it after Tippett helped her create an itemized, online inventory of her store on the e-commerce platform Shopify.

It was initially created to support her in-store, point-of-sale system, but Shopify also laid the groundwork for an online store. When Cottle was suddenly forced to close by Georgia’s state-wide stay-at-home order in April, she knew it was time to finally take the online leap.

With her store’s inventory already cataloged, Cottle had a tech-savvy friend help her launch the online business in just a couple of days and quickly began promoting it through social media.

“She had such a powerful social media presence already and she could just steer those people right to the website when that needed to be the method of checkout,” Tippett said. “She just has a natural ability to just post things on social media and make something of it.”

Over the years, Cottle had built a trusting relationship with her fanbase through online events like Thursday night painting tutorials on Facebook Live. She also wasn’t afraid to share her private life with her customers, with her daughter, nicknamed Little Cottle, often appearing in fun, personal posts. Now, however, it was time to take it to a new level.

“I just kept saying, ‘I’m here, and I’m willing to do whatever (the customer’s) comfort level is,’” she said. “I wasn’t opposed to any way of doing business during that time.”

Her social hustle paid immediate results, as the online store drew orders from as far away as Hawaii and a U.S. military base in Japan. Beyond her record-setting sales in April and May, Cottle continued her success by more than doubling her sales for June.

Future growth might include hiring her first employees, and possibly expanding her online sales to both Facebook and Instagram, something the Shopify platform has laid the foundation for her to do.

“[We want to] take this level of sales, which has grown tremendously lately, and make sure that we put the processes and infrastructure in place to maintain this and grow strategically,” Tippett said. “Not just wildly where it becomes unwieldy.”

Cottle attributes her rapid growth to the strength of her longstanding relationships — both with her customers and with the SBDC.

“Oh my gosh, I recommend the SBDC to everybody,” Cottle said. “I think that people would be crazy if they didn’t utilize the services of the SBDC, because they’re invaluable. Especially with no cost to me, it’s great to have that business mentor that’s there to just bounce things off of sometimes.”