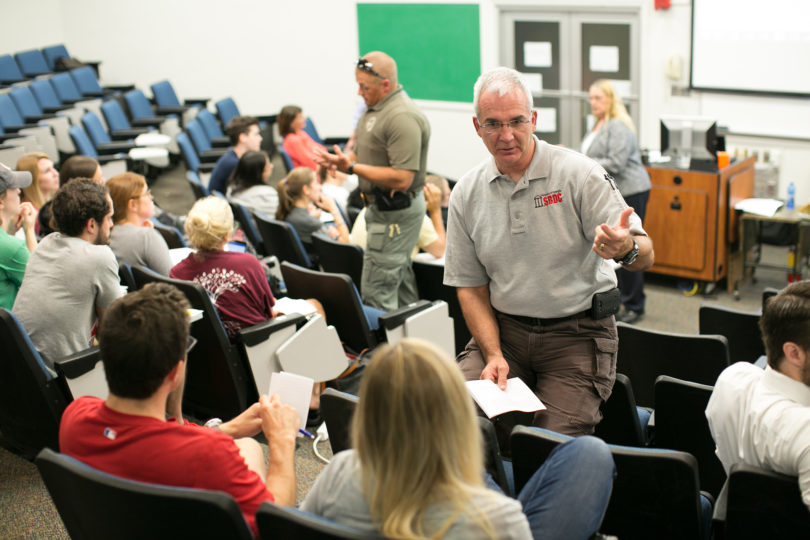 Students in veterinary medicine learn about special issues related to preparedness for their profession. SBDC organized visit from local fire

Athens, Ga. – Dr. Joanna Davis wishes she had the chance to talk to firefighters, police officers and first responders when she was a University of Georgia student two decades ago.

The veterinarian, thrust into disaster zones across the globe, learned on her own how important it is to plan for emergency situations. The UGA Small Business Development Center is helping the College of Veterinary Medicine’s current generation come to that realization much sooner.

“This was not even on our radar back in the early ’90s,” said Davis, an adjunct assistant professor who works for the U.S. Department of Agriculture. “Now for each graduating class, we want to instill them with this knowledge and confidence going forward.”

Davis invited Mark Lupo, area director for the Columbus State office of the UGA SBDC, to speak to her class, “Veterinary Emergency Preparedness and Response.” Lupo led a three-hour session for the 45 students on planning and working with local emergency agencies in a disaster situation.

About half the students expect to become small business owners and start their own private practice after earning a degree. That’s where the SBDC’s expertise can be particularly handy. Approximately every dollar spent on preparation leads to $7 in cost savings in emergencies, Lupo said.

“I learned about just how many resources there are for all these disaster situations that we talk about,” said student Emily English. “I’m glad to learn there are resources out there in the community and it sounds like what we need to do to be prepared for these type of situations is utilize them ahead of time.”

“It helps knowing beforehand what resources are there for you to contact and being comfortable to reach out to them,” Lupo said. “They’re very open to doing that because they need these veterinarians as a resource for their response plans.”