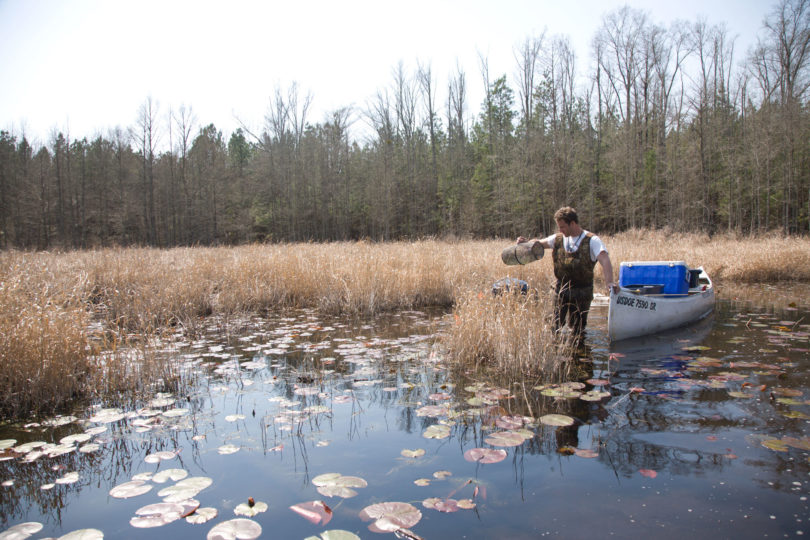 The university has operated the Savannah River Ecology Laboratory in cooperation with the federal government for 56 years.

The letter also announced the appointments of Carl Bergmann, a researcher at UGA’s Complex Carbohydrate Research Center, and Carl Strojan, the associate director of SREL, as interim co-directors of the facility.

“The University of Georgia and its Savannah River Ecology Laboratory have enjoyed a long and productive relationship with the U.S. Department of Energy and its federal predecessor organizations at the Savannah River Site,” wrote Adams. “This special relationship has helped to generate a historical body of databases of ecological research; provide invaluable outreach, education and service; and, perhaps most crucially, ensure public confidence in the safety of SRS operations. We regret that this special relationship has been altered in such a major way.”

Many SREL staff were notified they were be terminated as of June 30, and the remaining staff have been charged with completing grant and contract research, while also carrying out activities required to maintain the reduced operations. These operations are expected to last for more than one year.

Six faculty were transferred to the Athens campus and 21 graduate assistants were relocated to their home departments. A few research scientists will continue to use the laboratory under existing contracts and a minimal core of physical plant support staff will remain to maintain the facilities. The research and support staff losing their positions will have priority for open positions on the Athens campus.

“In making these difficult decisions, our greatest concern is for the staff who have been integral to this operation and helping them to make an appropriate transition to their next employment,” Adams said.

“We understand that DOE and its Office of Environmental Management (EM) are under tremendous financial pressure, and that the EM budget has been greatly reduced in recent years,” Adams wrote to Bodman. “Therefore, we understand the pressures that have led DOE-EM, which must give priority to environmental cleanup, to redefine its relationship with the Savannah River Ecology Laboratory and to insist on being viewed as a ‘customer.’

The practical result of this new reality is the withdrawal by DOE of the longstanding core laboratory infrastructure support essential for SREL to function as a viable and vibrant entity distant from the main campus in Athens. Unfortunately, UGA, which also faces significant budgetary pressures and the need to meet instructional, research and service priorities, is unable to replace the financial support that DOE has withdrawn.”

For 56 years, the university has operated the Savannah River Ecology Laboratory in cooperation with the federal government, including since the 1970s the DOE. The department’s EM, which is responsible for SREL’s funding, has been clear in recent years that it could provide funding only for applied, environmental clean-up related contract work. Funding for more basic ecological research was to be sought from other agencies through competitive peer review, with no ongoing general operational funds above those included in the approved projects from DOE.

As a result of the changes in federal priorities, federal funding for SREL, which reached a high of some $11 million by the late 1990s, has dwindled. Beginning in fiscal year 2001, DOE reduced SREL funding by $2 million but the cut was restored through diligent work of supportive congressional delegations in Georgia and South Carolina. In February 2005, President Bush again proposed complete elimination of SREL funding, but again with congressional help UGA was able to secure agreement in June 2005 for $4.5 million in fiscal year 2006 and $1 million in fiscal year 2007,