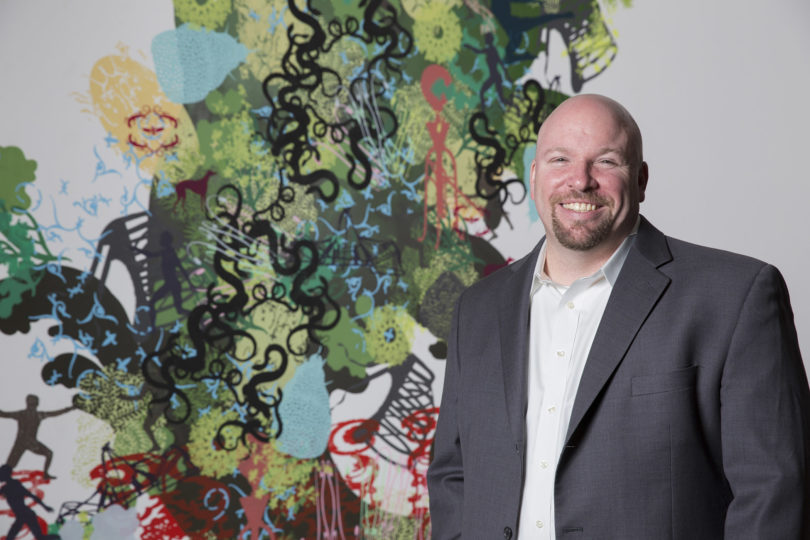 The Lamar Dodd School of Art welcomes its new director to campus this fall. Chris Garvin comes to UGA from The University for the Arts in Philadelphia, where he served as program director. An interactive designer and creative director in the private sector for many years, Garvin has written and spoken extensively on the complexity of contemporary design and business practice, and its implications on the future of design and education. He spoke with Columns upon his arrival to UGA this summer.

Columns: You are a professor and an artist. How do those two fit together?
Garvin: There are parts of my life that I act as a designer, as an artist, an educator, an entrepreneur, and I embrace them all. I’m never scared to be a hybrid, to have “and” be in there. Part of my experience is writing curriculum and programs at universities and getting them off the ground, building coalitions and curriculums so that things can happen. I’ve done that looking at those projects as a designer, and I’ve used those designer skills to help me become a better educator.

Columns: That takes a lot of confidence, but also a lot of humility-it can seem like a contradiction.
Garvin: It can, and I have often said, “I have just enough ego to try this, but not so much ego that I need to own it.”

And it’s helped me a lot in building things. Many times in academia, the ownership is what can kill interesting projects and keep them from getting off the ground.

Columns: You come to UGA from a big city setting. How is that related to your vision for the school of art?
Garvin: So I grew up in a formerly big city, Buffalo. I went to ­grad school at Ohio State, then I lived in New York City for 10 years-and that’s an education in itself-then in Philadelphia. And those are two very different American metropolises, and they work very differently.

I moved to New York to be a designer, with a painting degree, so some of my vision comes out of my own experience. I was trained in a great art school in a large research university, where I gained the confidence to use those skills in a variety of different ways.

For example: I could talk to computer scientists; I borrowed projectors for my thesis exhibit from the football team; I had an office in a center shared between the art school and the computer science school, all very formative experiences. Being a painter and working in those areas, I learned the idea of abstracting things, moving across disciplines, across mediums, and in a contemporary business world that would be called “knowledge transfer.” It’s incredibly marketable. So I like to say I was accidentally marketable because of my education, but it wasn’t so much an accident as that academic environment.

For me, the most exciting thing about UGA is that the pieces of that same ecosystem are here. Helping to build those connections where our graduate and undergraduate students can excel in whatever they want to do, that their vision of success is not just the gallery show, not just working at a design firm, but it’s a variety of different things that they choose. We have the ability to do that here. Few places in the world have the academic ecosystem available to make those kind of malleable, exciting graduates who can go out into the world and do whatever they want.

Columns: That’s a great advantage for a big art school in a large university, but can also be a struggle, culturally maybe, because we separate things, and so that’s part of your challenge, is it not?
Garvin: Connecting them is clear to those who are interested in that and who see the arts as a powerful, indispensable part of our society.

I think too often the arts have cloistered themselves. We think we’re something special that needs to be protected-that we need to be nurtured like a garden. And I’ve always thought of the arts as a forest; you just let us go and we’re going to pop up anywhere. The arts are that strong.

The creative impulse is such an important part of our culture that, I think opening up the doors of Dodd, letting what we do get out into UGA, letting more of UGA in, will infect the place. You see that protectionist mentality in a lot of art schools right now, but I don’t think we need to protect the arts. We don’t have enemies. We have the support of the people who want to know more about us, and that’s going to be a great place for Dodd to grow into in this university.