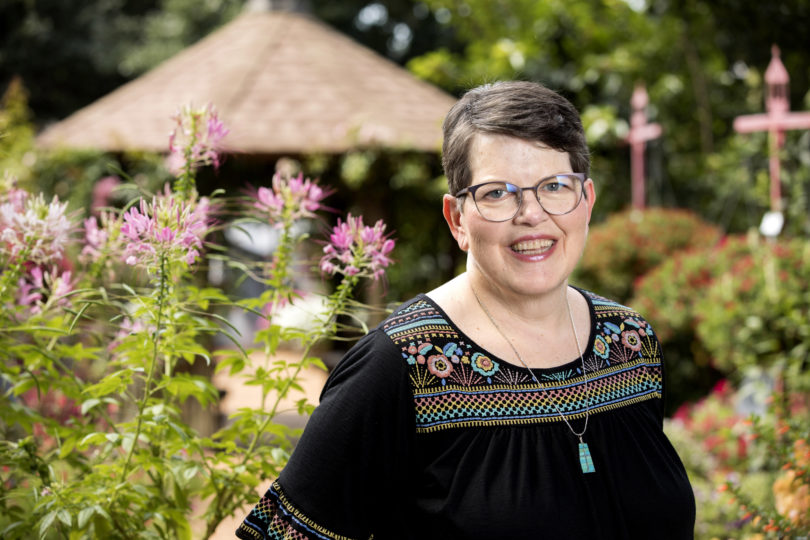 Wendy Paulsen serves as the office manager for the Odum School of Ecology and the River Basin Center. (Photo by Dorothy Kozlowski)

Wendy Paulsen likes that her work means something.

As the office manager for the Odum School of Ecology and the River Basin Center, she plays a role in making sure faculty members and researchers have what they need for their work on environmental issues.

“You hear and learn about what’s going on, and it makes you a little more passionate about what you’re doing. I find the research fascinating,” she said. “It’s very special to work in a place that has causes and effects on the planet. A lot of what they do here changes the world.”

Paulsen splits her time between the two locations—three days at the School of Ecology and two days at the River Basin Center. She’s the office manager at the center, and when she’s at the ecology building, she’s part of the school’s human resources team.

“You need an administrative machine behind the work. Faculty and researchers can’t do what they do unless we provide the services they need for that work,” she said. “That’s the satisfying part of my role.”

Paulsen and her husband, Peter, moved here from New Jersey to be close to their daughter, son-in-law and two grandchildren. She did human resources recruiting and was a program coordinator for the New Jersey State Library. Prior to that, they lived in Chicago. She also worked as a substitute art teacher before working as a human resources coordinator.

“I’ve always lved working in education,” she said. “At the university level, it is exciting to be a part of an environment where young adults are exploring their educational opportunities and career paths. I work with graduate students, and it is inspiring to hear them talk with their advisors regarding their research and to hear their advisors challenge the students thought processes and ideas. Everyone is still learning, and that inspires me every day to be open to new concepts.”

Paulsen has an Associate of Arts degree in graphic design and took classes toward a Bachelor of Arts degree in fine art. Before working in human resources, she was a methods and procedures analyst and owned a desktop publishing company with her husband.

She still uses those creative skills to French knit, draw in colored pencils, paint and make jewelry. She has a studio at her home where she creates pieces to give to friends and family and paints with her grandchildren—specifically pieces for a Christmas village.

Paulsen was diagnosed with Parkinson’s disease, a progressive nervous system disorder that affects movement, three years ago after a knee replacement. Her condition was underlying but was triggered by the surgery.

In the two years after her diagnosis, she realized that she didn’t know any other women with Parkinson’s disease. She decided that rather than staying uninformed about her condition, she would start a closed Facebook group to help others through their diagnosis. It’s called Just Like You—PD Women, and it now has 27 members from various states and countries.

“This group opened my horizons,” Paulsen said. “It has changed my life because we’re all at different stages, but the compassion is there.”

Once word of the group got out, some of her co-workers in the School of Ecology approached Paulsen to fundraise for research on Parkinson’s disease in women. That became the first Ecology Cares project—a Valentine’s Day bake sale that raised nearly $1,100 in three hours. The tradition continued this summer with a bake sale benefiting the Athens Area Homeless Shelter. Plans are in the works for a bake sale in October.