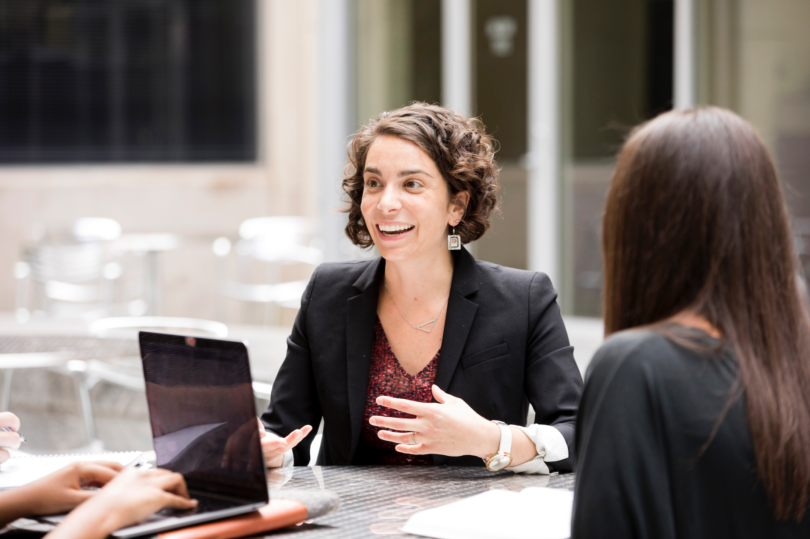 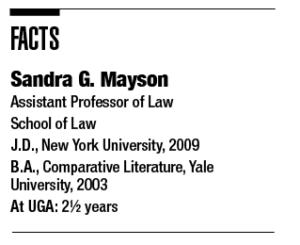 “I loved representing people charged with crime. …  I found that sitting face to face with a human being who was in a bad situation and being a zealous advocate for that person was thrilling, gratifying and challenging,” Sandra G. “Sandy” Mayson said of her time as an attorney with Orleans Public Defenders in New Orleans. “It was work that I loved.”

It was also a job that allowed her to see the “injustices and unfairness” of our country’s criminal justice system, which serves as the basis for her research.

“I would like for the criminal justice system not to perpetrate profound injustice every day in the way it has been doing, and I want to play a role in making the system more coherent and just,” she said.

Mayson believes there needs to be more clarity about what the criminal justice system needs to achieve and the best ways to do it and considers the theme of her scholarship as “examining preventive interference with liberty and preventive restraint.”

“Criminalization and punishment have some preventative effect, but it is not the best public safety tool in every situation,” she said.

Her world-class scholarship addresses bail reform, pretrial detention, algorithmic risk assessment tools used to determine bail and empirical studies about misdemeanor crime rates across our country. Mayson’s work has been published in premier law journals such as the Yale Law Journal, the Stanford Law Review and the Notre Dame Law Review. Last year, this thought leader was presented with the Association of American Law Schools Section on Criminal Justice Junior Scholar Award for her Yale Law Journal article “Bias In, Bias Out.”

In the award-winning piece, Mayson acknowledged that algorithmic risk assessment is increasingly used in the criminal justice system to estimate the likelihood that a person will commit future crime and that these assessments tend to have disparate racial impact. She argued that the problem is not algorithmic methodology, however, but rather the nature of prediction: “All prediction looks to the past to make guesses about future events. In a racially stratified world, any method of prediction will project the inequalities of the past into the future. This is as true of the subjective prediction that has long pervaded criminal justice as of the algorithmic tools now replacing it. Algorithmic risk assessment has revealed the inequality inherent in all prediction, forcing us to confront a problem much larger than the challenges of a new technology.”

Relatedly, Mayson serves as an associate reporter for the national Uniform Law Commission on a “model bail” act—officially called the Alternatives to Bail Act—with the goal of creating a uniform law addressing pretrial release and detention to be implemented across our nation. She is currently coauthoring a paper evaluating bail practices in Georgia in the wake of recent statewide reforms. She is also playing an instrumental role in connecting fellow criminal justice colleagues across the UGA campus via a newly established listserv and the creation of a brown bag series.

After holding fellowships at the University of Pennsylvania Law School and the New York University School of Law, Mayson sought the opportunity to come to UGA and the School of Law due to its “genuine” and “dynamic” atmosphere. When she visited campus, she “could tell the entire school felt like a community.”

Mayson said her conversations with her criminal law and evidence students reflect that sentiment and that they also help to “illuminate” questions in the law and aid her in better understanding “where the law is clear and where the areas of ambiguity are.”

Her goal is to “empower” her students to learn the law and to equip them to have the same relationship with the law that she does—where they will appreciate it, engage with it and deploy it as experts and practitioners.

“That is a gift I would love to be able to give them,” she said.