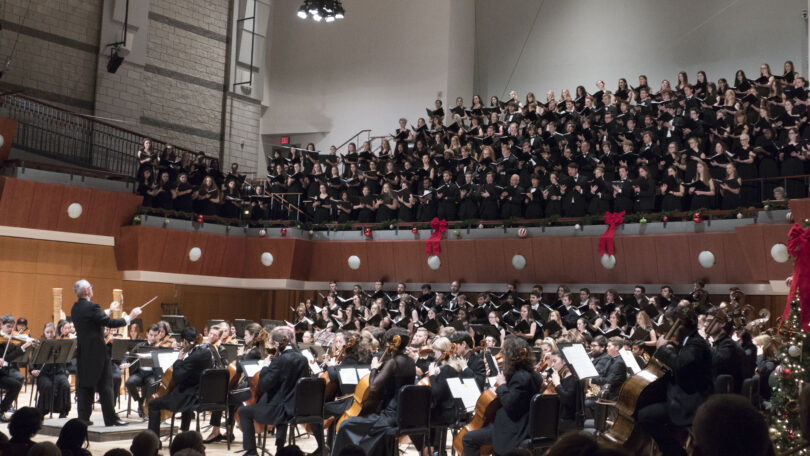 Performances by multiple ensembles are part of the Thursday Scholarship Series and will take place Dec. 2 and 3 at 7:30 p.m. This will be the return of in-person concerts after the last one in 2019, seen above. (Submitted photo)

Start the holiday season off right by coming to Hodgson Hall for the return of the live Hugh Hodgson School of Music annual holiday concerts. Audiences will be able to enjoy holiday classics and more to get into the spirit of the season, with performances by multiple ensembles. The concerts are part of the Thursday Scholarship Series and will take place Dec. 2 and 3 at 7:30 p.m.

The program will open with the Men’s and Women’s Glee Clubs, University Chorus and Hodgson Singers performing “Ave Maria,” along with a traditional Nigerian carol by Betelhemu.

John Coble will lead guest strings artists in George Frideric Handel’s organ concertos, which were played during intermission in performances of his oratorios, usually with Handel himself as the organ soloist. Though not specifically associated with his well-known “Messiah,” Handel’s organ concertos capture the same joyful spirit.

Under the baton of Mark Cedel, the UGA Symphony Orchestra will conclude the first half of the concert with Malcom Arnold’s “The Holly and the Ivy: Fantasy on Christmas Carols.”

During intermission, the UGA Flute Quartet will perform holiday music in the lobby led by Angela Jones-Reus, professor of flute.

Daniel Bolshoy’s guitar ensemble will start the second half of the concert with pieces by Luigi Boccherini and also will perform Seis Villancicos, or six Spanish carols arranged by Francois Castet.

The UGA Jazz Sextet will be playing “White Christmas” and “The Grinch,” arranged by Paul Di Cicco, and will highlight each member artistically. Directed by David D’Angelo, the ensemble consists of Ramon Zamudio on trumpet, Paul Di Cicco on alto sax, Michael Siler on tenor sax, Hayden Johnson on drums, Michael Solomon on piano and Jordi Lara on bass.

Bandmaster Phil Smith will lead the British Brass Band in some fan favorites.

“During this season, we all celebrate unique traditions of hope, love, joy and peace. Christmastime, with jingle bells, the smell of roasted chestnuts and the sound of brass instruments, is as common as ice cream and apple pie. Celebrate the sounds of the season with our UGA Brass Band,” Smith said.

The Hodgson Singers will end the concert with “Stille Nacht,” under the direction of Dan Bara, the John D. Boyd UGA Foundation Professor of Choral Music and the director of choral activities.

After the concert, the Bulldog Brass Society will play outside the Performing Arts Center for a festive end to the evening.

This performance is underwritten by William Barstow in memory of Dolly Barstow.

As part of the Thursday Scholarship Series, proceeds from this concert are instrumental in helping to offer scholarships to young musicians. Tickets are $25 for adults and $10 for students and children, and can be purchased online or by calling the Performing Arts Center box office at 706-542-4400. For those unable to attend the concert, live streaming will be available online at music.uga.edu/live-streaming.