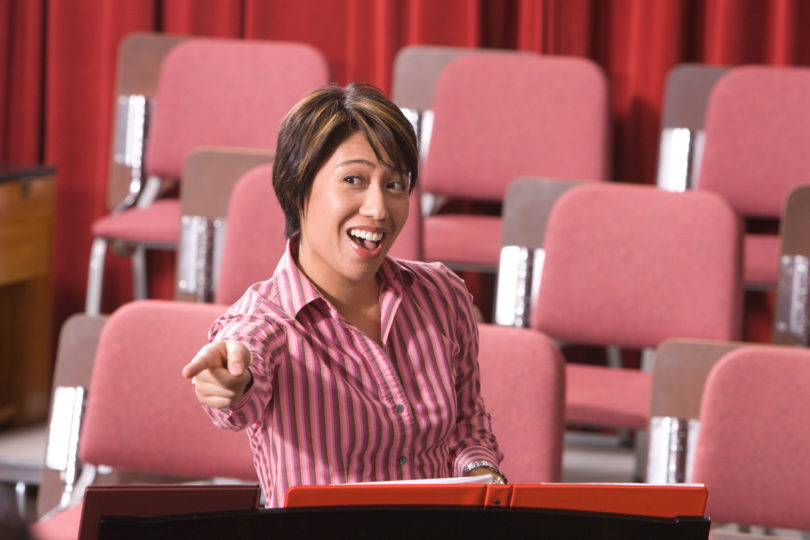 Mitos Andaya’s fingers are like long blades of grass swaying in a soft breeze, her body moving to the melodic sound. As the grand crescendo of voice and piano permeates Hugh Hodgson Hall, Andaya’s movements become more demonstrative, as if each note arises from within. The sound is magnificently fluid, and the University Chorus has just successfully completed the first song of its last performance in a recent concert to resounding applause.

The University Chorus is one of five singing groups upon which Andaya has cast her luminescence and roused to a new level. In fact, Andaya has done more than just awakened the choral department: She’s sent it on an international tour for the first time in 20 years.

With the help of a choir tour company, Andaya arranged for the 10-day choral extravaganza in the United Kingdom to include joint performances with European choirs at the Dornoch Choral Festival in Dornoch Cathedral, Scotland, as well as at the York Minster Cathedral and Christ Church Cathedral in England, among other stops. The UGA Tour Choir is composed of members from other groups Andaya conducts, including the University Chorus, Women’s Glee Club, Concert Choir, Classic City Jazz and Collegium Musicum.

“This was a major event for the choral area, the School of Music and the university,” says Andaya. “UGA has much to offer students and the music community not only locally, but nationally and internationally. Some of our top students have never been out of the state of Georgia, so not only did this tour enlighten our own students culturally, but it showcased some of our best talent to the music community overseas.”

Their performances are so riveting, it’s no surprise that Andaya’s groups are in high demand. The big groups—University Chorus and Women’s Glee Club—perform twice a semester. The smaller groups, Classic City Jazz and Collegium Musicum, bustle between community and university performances, from “Jazz at the Chapel” to events like the Archway to Excellence campaign kickoff this past April at the World Congress Center to local dedication ceremonies.

Andaya began singing in choruses in elementary school in her home state of Washington. She started getting serious about music in junior high through the swing choir. By the time she reached high school, vocal jazz—popular in the Northwest then—had become a large influence in her life.

“I was ready to receive that music,” Andaya says. “Simon was an excellent teacher in revealing independent lines and harmony as well as interpreting. I’m so incredibly lucky to have studied with someone who had a love for early music.”
Andaya received her master’s and doctorate degrees with honors from KU, where she directed the Women’s Chorale and Jazz Singers, in addition to conducting camps and workshops throughout the U.S.

Now in her fifth year of teaching in Athens, Andaya is grateful to be at UGA.

“I had offers from other schools, but I chose UGA because I was impressed with the people here and their collegiality.”