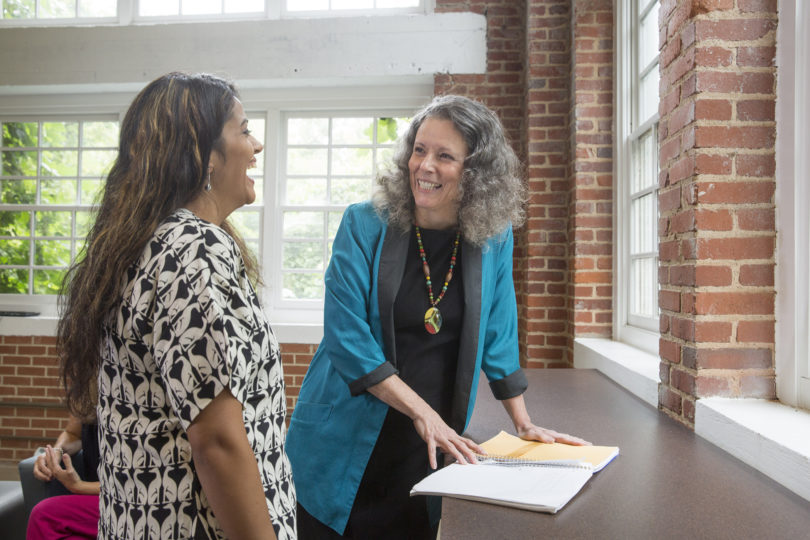 Anna Scheyett is no stranger to change.

The new dean of the School of Social Work began her academic journey with degrees in biology and human genetics, fields not usually associated with social work.

She spent time in pharmaceutical research and development but wanted to do more. It wasn’t until Scheyett encountered a pregnant, poverty-stricken woman while working as a counselor at a women’s health clinic in Boston that she found her true calling.

“She was expecting her fourth child. Her husband forbade birth control, and for religious reasons she was opposed to abortion but felt that she had no other options,” Scheyett said. “She said that she’d rather go to hell than not be able to feed another baby. I was so outraged that she had to make that kind of choice. That’s when I decided to become a social worker.”

Scheyett returned to school, earned master’s and doctoral degrees in social work and became a licensed clinical social worker. She advanced to the position of dean of the University of South Carolina College of Social Work. Under her leadership, the college exceeded a $4 million fundraising goal. The college’s scholarly productivity, interdisciplinary research and partnerships with other institutions also more than doubled, and it jumped 17 places in the U.S. News & World Report ranking of graduate social work programs.

Then tragedy struck. Historic flooding in South Carolina, the shooting of black parishioners at a church in Charleston and a murder-suicide on the USC campus made Scheyett reassess her priorities.

“I realized that life is simply too short, and it is important to be doing exactly the most valuable, inspired work that you can,” she said.

Imbued with a new sense of urgency, Scheyett was attracted to UGA’s drive to “move the needle” in terms of impact, she said. The UGA School of Social Work’s ­attention to diversity and strengths in the areas of social justice, health disparities, well-being and poverty held particularly strong appeal.

“They are all areas of passion for me,” she said.

Another solid draw was UGA’s commitment to the success of students struggling with hardship, through programs such as Let All the Big Dawgs Eat and Embark UGA, an outreach program based in the J.W. Fanning Institute of Leadership Development that strives to make college more accessible for students at risk for not considering college as an option or who have difficulty staying in college because of challenges meeting basic daily needs.

Scheyett not only brings to UGA a familiarity with “hard science” research and an eagerness to help vulnerable populations but delivers her message in an engaging way.

Besides a host of academic papers, her résumé boasts general interest articles and presentations such as her TedX talk, “Social Workers as Superheroes.” A video recording of the latter has garnered more than 85,000 views since it was posted on YouTube in January 2015.

Her fluency in Spanish—thanks to her Puerto Rican mother—is helping to connect the school with Latino organizations and to identify ways to attract bilingual students to the social work profession.

Scheyett’s priorities include developing social work and nonprofit management professionals who can assist communities in tackling challenges such as poverty, abuse, mental illness and addictions, to name a few. Her first move as new dean has been to assess the school’s proficiencies and needs. She’s also intent on identifying big-budget research opportunities and strengthening community relationships.

In addition, she is looking at how the school can move new discoveries into the field more quickly.

“I want us to think about ways to disseminate our research to practitioners,” she said. “As social work researchers, we’re not necessarily as good at rapidly communicating our findings so practitioners can effect community-level change.”

Scheyett’s long-term goal is to see the school become a national leader. She is particularly focused on graduating students who can translate their training and research into measurable improvement in communities.

“The two underlying themes are excellence and impact,” Scheyett said. “We want the strongest possible graduates informed by the best research so that they make a real difference in Georgia and around the world.”

No stranger to change, Scheyett looks forward to making a difference at UGA.