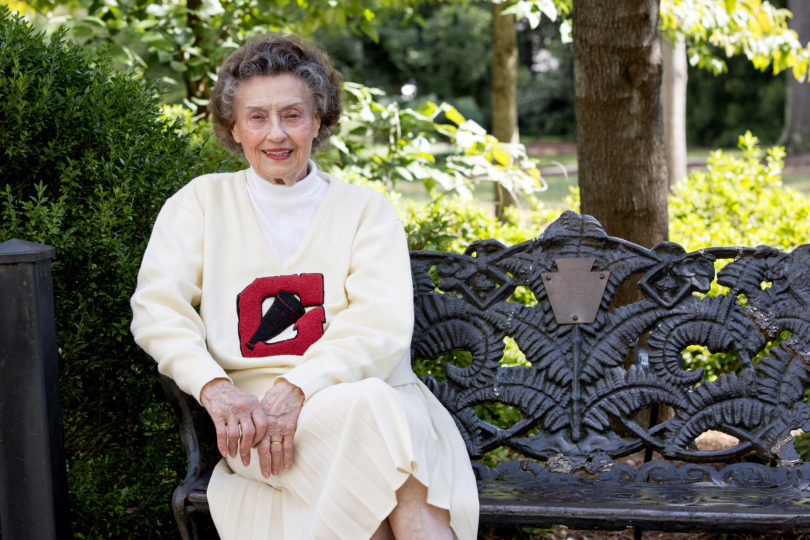 Former professor, cheerleader Bonnie Howard has rooted for UGA for more than 70 years

Bonnie Bellamy Howard’s school spirit has lasted more than 70 years. And this year’s Homecoming (see “UGA Homecoming Week is steeped in pride and tradition“) will be no different. She’ll ride in the parade and be on the field Oct. 15 during the first half with other cheerleading alumni, supporting the Bulldogs.

“It’s just a lot of fun,” she said. “I think it’s amazing—the reaction of the crowd when we run out on the field in our long skirts. That’s the most fun you’ll ever have—­running out on that field and having (more than 90,000) people stand up, scream and yell.”

She started as a freshman at UGA in 1944, putting herself through school by working part time as a cashier in the dining hall.

“I was 16,” she said. “And some of the other students were going to Georgia, so I decided I wanted to go to Georgia, too. It was really that simple.”

In addition to her job, Howard also was involved in the Voluntary Religious Association, the Youth Workers Association Council, the 4-H Club and the Economics Club. On Friday nights, she enjoyed the dances.

But one of her favorite extracurricular activities was joining the UGA cheerleading squad her senior year. The football team won all 11 games that year, Howard recalled, including the Sugar Bowl. She’s celebrating the 70th anniversary of joining the squad, making her one of the oldest cheerleading alumni. And she’s been back for as many Homecoming games as possible since then.

After graduating in 1947 with a Bachelor of Business Administration degree at age 19, she worked as a secretary. Eventually, she decided she wanted more and received her master’s degree in 1950. While working on that degree, Howard taught secretarial science classes in the College of Business ­Administration.

Howard was teaching at South Georgia College when she met her husband, Daniel, an FBI agent. They moved to California and started a family that now includes five children—Dana, Richard, ­Camille, Gregory and Jody—10 grandchildren and four great-grandchildren. She continued to teach part time while raising her family. After several other posts, the Howards eventually moved back to Georgia. At that point, she decided to continue her education even further and graduated with her doctorate from Georgia State University in 1984.

After Daniel died, she wanted to get back into teaching full time and applied for a position at UGA, where she taught classes until she retired around 22 years ago, earning Teacher of the Year honors a couple of times.

Math and statistics have always been an interest of Howard’s. She likes to study the numbers to see what data she can pull out—averages, etc.

“I just liked going to school, and I was one of those weird students who liked to study. You don’t hear that much today,” she said. “I was always the inquisitive one in classes. I would be the one who asked all the questions.”

Her advice for students today is similar. She said the most important lessons she learned as a student UGA were to study and make good grades.

“Do your homework, but enjoy your time here,” she said. “There are so many things you can do to get involved. But don’t overdo it, because if you do, you will not make good grades.”