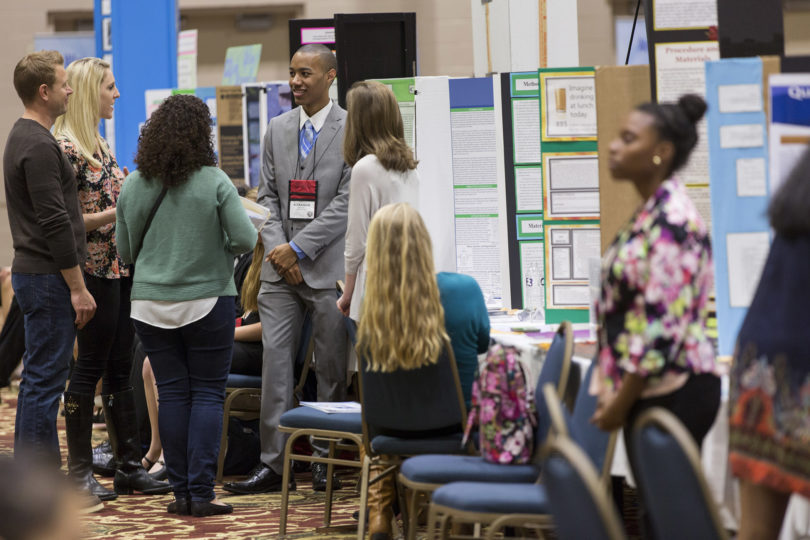 Athens, Ga. – More than 700 middle and high school students competed for cash awards and prizes last weekend at the 67th annual Georgia Science and Engineering Fair, administered by the University of Georgia Center for Continuing Education. Four students will advance to the Intel International Science and Engineering Fair next month in Pittsburgh.

The four students were selected as Green Power EMC ISEF trip winners. Green Power EMC, a nonprofit corporation that buys and markets electricity from green Georgia sources and generates awareness about environmental products and services, sponsors the state competition and provides travel funds and cash awards to students selected to advance.

Entries this year, which were presented over two days at the Classic Center in Athens, included projects on sustainable energy, agriculture, meteorology, aeronautics, entomology and chemistry, among many other areas of science and engineering.

“In conclusion, it’s definitely feasible for an eye-tracking test to be created for, not only dyslexia, but Parkinson’s and any other disorder or disability that causes ocular dysfunction,” Niemczyk said.

She hopes that eventually tests like the one she has researched can be used instead of written tests, which are unreliable.

“If they’re having a bad day or they’re not good test takers, they could be diagnosed with something that they don’t even have,” Niemczyk said.

Alexander Nichols, a senior at Lithia Springs High School, researched and tested ways to combat selenium deficiency. He began his research after his grandmother told him some of her calves were having trouble walking. He took pictures of the calves to a local veterinarian who diagnosed selenium deficiency as a result of the nutrient deficient plants they consumed.

Nichols’ research showed that sulfur in the soil on his grandmother’s land was preventing grass that the calves ate from absorbing selenium.

“Georgia happens to be one of the most selenium-deficient states in the nation,” Nichols said. “That’s because we co-apply sulfur which inhibits the plant’s uptake of selenium and we get our selenium content from the plants.”

Alexandra Bentz, a third-year poultry science doctoral student at UGA, was judging the science fair for the second time. She was most interested in unique projects that were done by students with limited outside help.

“I want to try to figure out how they came up with (the idea),” she said. “You don’t want to hear they just saw it online or they just got their idea from a book or something. It’s nice when they have some kind of personal experience and they can put a nice spin on it and it generates a question and leads to a hypothesis. That sort of thinking is what you like to see.”

In addition to the four Green Power EMC trip winners, a fifth student will attend ISEF as an observer. This observer award is sponsored by Merial, an international animal health care company. The award pays for a ninth- or 10-grade student to go to the ISEF to observe the competition but not participate, with the hope that he or she will compete in future years.

Georgia Science and Engineering Fair Green Power EMC ISEF trip winners:
• Caroline Hendricks, a sophomore from Carrollton High School in Carroll County.
• Alexandra Melehan, a senior from Woodstock High School in Cherokee County.
• Jake Wong, a junior from Chattahoochee High School in Fulton County.
• Jeffery Yang, a junior from the Gwinnett School of Mathematics, Science and Technology in Gwinnett County. Yang also was presented with the Pinnacle Award, sponsored by The Kroger Co., Atlanta division, which is the highest award given at the fair.

The University of Georgia’s Office of Academic Special Programs equips Georgia’s pre-college students to succeed and to flourish in an increasingly complex and highly technical world by becoming problem solvers, critical thinkers, inquirers, reflective learners and more productive and influential members of their communities. For more information about our programs, see www.georgiacenter.uga.edu/youth/pre-collegiate-competitions.