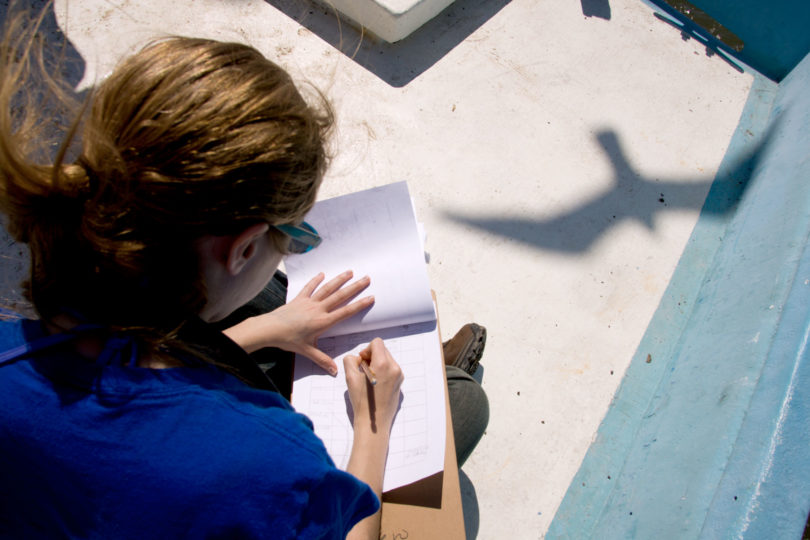 Clara Smith takes notes on the research vessel RV/Spartina while a seagull flies overhead. The group was identifying specimens brought in by the trawling nets.

Standing on the bank of a salt marsh on Georgia’s Sapelo Island wearing shin-high rubber boots, Mary Ann Moran encouraged a group of high school students to join her.

The goal was to collect brackish water for the students to analyze later, using state-of-the-art DNA techniques. Marine bacteria are still so poorly understood that there’s a good chance that many of the students would identify new species.

“About half will find bacteria that have never been found before,” Moran said.

For the past decade, Moran’s research has focused on a particular group of marine bacteria known as roseobacters for the pink color of some of the cells. Moran’s work, recently awarded a $2.6 million grant from the Gordon and Betty Moore Foundation, is illuminating how these marine bacteria move sulfur from the oceans to the atmosphere, where it plays a role in seeding clouds and regulating the Earth’s climate.

Moran has been working on Sapelo Island, home to UGA’s Marine Institute, for 20 years. Her trip to Sapelo earlier this year with 20 Cedar Shoals High School students helped bring new scientists to a field that Moran said is important but often overlooked. Even those who go on to become chemists, musicians, accountants or doctors will have a sense of the vital role bacteria play in the health of the planet.

“I think it’s very important for people to understand how the Earth works and how the single-celled organisms that can’t be seen and sometimes smell bad are in many ways actually making the Earth run,” Moran said.

At the Marine Institute, the students honed the basic skills that will help them explore the microbial world. They gathered around Moran as she distributed petri dishes, also called plates.

One of Moran’s postdoctoral students, Jose Gonzalez, now at the University of La Laguna in Spain, discovered that roseobacters play a role in taking sulfur from the ocean and moving it into the atmosphere.

A few years later, Moran’s team discovered that the bacteria also can take sulfur and-instead of sending it into the atmosphere-turn it into a form that’s important in the ocean’s food web.

“They were the only bacterium isolated at that point that had both capabilities,” Moran said.

Back on Sapelo, the students collected water samples from the marsh for their bacterial studies. After carefully sealing and packing plates for their trip back to Athens, they boarded the Marine Institute’s research vessel, the RV/Spartina, and trolled the estuary, pulling in fish, shrimp, crabs, sea squirts and other aquatic creatures that the students dutifully cataloged.

After the cruise, the students grabbed a quick lunch before heading to the beach to identify shells. Then they headed home, taking with them cardboard boxes that contained the bacteria for later identification, using the same DNA techniques that Moran uses in her lab.

After giving the bacteria a few weeks to grow on the plates, Moran visited the students in their classroom at Cedar Shoals to teach them how to isolate the bacteria.

Bob Hodson, who recalls mentoring Moran when she was a doctoral student at UGA, said Moran’s motivated by an infectious enthusiasm.

“Her strength is just an innate curiosity that only the best scientists, naturalists or, really, the best in any field have as their guiding force,” said Hodson, a former director of the UGA School of Marine Programs.

“They’ll carry her perspectives on science and on life in general with them wherever they go,” he said.