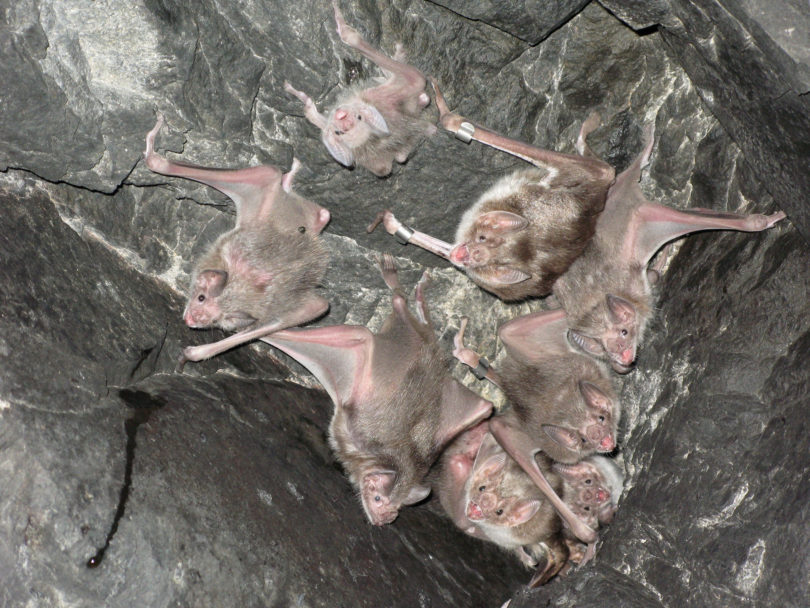 A colony of common vampire bats

Male vampire bats are the likely culprits in spreading the virus

Athens, Ga. — Rabies is likely to appear on the Pacific coast of Peru—an area where it currently does not occur—within four years, according to a report by an international team of researchers just published in the Proceedings of the National Academy of Sciences.

The authors, led by Daniel Streicker of the University of Glasgow and the University of Georgia, combined genetic analysis of vampire bats and rabies virus strains from across Peru to gain insights into how the virus spreads. They found that it is most likely carried from one area to another by infected male vampire bats that leave their original colonies upon reaching maturity. The findings could help public health officials in Peru and neighboring countries prepare for and mitigate future outbreaks.

Rabies is a serious threat to public health and agriculture in Latin America, causing human fatalities and more than $30 million in livestock losses every year. Vampire bats cause the majority of human and livestock cases in much of Latin America, largely owing to their blood feeding behavior. Current rabies control efforts that focus on reducing the size of vampire bat populations have proved ineffective; human and livestock deaths from rabies are on the rise and rabies is now appearing in previously virus-free areas. Understanding how bat dispersal drives invasions is therefore critical for forecasting the virus’s likely spread as well as for developing strategies to stop it.

Because tracking infected vampire bats in real time is logistically impractical at best, Streicker and his colleagues collected molecular genetic data from bats and rabies virus to explore historical patterns of the virus’s spread.

First they analyzed the genetic sequences of 264 samples of rabies virus collected from infected livestock all over the country between 1997 and 2012. They found that almost all the viruses could be traced back to one of three common ancestors. Two virus lineages occurred east of the Andes, separated into the north and south sampling areas, and a third virus lineage was found in the inter-Andean valleys to the south.

To analyze vampire bat genetics, they used tissue samples from 468 bats collected from across Peru between 2008 and 2013. They looked at two kinds of DNA: nuclear DNA, which is inherited from both parents, and mitochondrial DNA, inherited only from the mother.

Analysis of maternally inherited DNA showed fine-scale spatial differentiation of bats from different parts of Peru, and over a dozen genetic lineages. Most groups with a similar maternal lineage lived exclusively within single departments, the Peruvian equivalent of U.S. states. This suggested that females do not move between different regions of Peru.

The results of the analysis of bi-parentally inherited nuclear DNA told a very different story.

The researchers found that bats with the same nuclear DNA signature were clustered into just three separate geographic regions. The spatial distribution of these three lineages was strikingly similar to the three genetic groups of rabies virus.

“In a nutshell, this shows that male vampire bats are likely responsible for dispersing rabies across the landscape at the continent level,” said study co-author Sonia Altizer of the University of Georgia Odum School of Ecology. “This is because genetic markers show high site fidelity in females, but not in males, and genetic structuring of bi-parentally inherited nuclear DNA of the bats closely matches the rabies virus genetic structuring, while the maternally inherited mitochondrial DNA markers do not match at all,” she said.

By taking into account the collection dates of rabies virus samples, Streicker and his colleagues were able to reconstruct the velocity of the historical spread of the virus across the country. Using these estimates combined with detailed maps of Peru’s landscape features, they developed a forecast for likely future rabies invasions.

While the Andes mountains form a major barrier to movement by vampire bats, the maps revealed that corridors allowing their passage do exist, and the genetic data from bats confirm male-mediated dispersal across the Andes. Based on the historic rate of spread, the researchers calculated that rabies virus could reach Peru’s Pacific coast by June 2020.

To confirm their predictions, Streicker and his colleagues collected additional data on livestock deaths from rabies that took place from 2013-2015, after the period when the virus samples used in their genetic analysis were taken. This new information indicated that rabies was indeed traveling toward the Pacific coast along the corridors the team identified as the likeliest routes, progressing at a rate of 16 kilometers per year.

“Understanding what controls the spread of disease is more important than ever,” said Sam Scheiner, director of the National Science Foundation’s Ecology and Evolution of Infectious Diseases Program, which funded the research. “This study demonstrates that modern genetic tools can measure that spread. In the future, such tools will be important in controlling known diseases, such as bat rabies, and new diseases as they emerge.”

Besides Streicker and Altizer, the study’s co-authors were former UGA graduate student Jamie Winternitz of the Czech Academy of Sciences and the Max Planck Institute for Evolutionary Biology; Dara Satterfield of the University of Georgia; Rene Edgar Condori-Condori and Andres Velasco-Villa of the U.S. Centers for Disease Control and Prevention; Alice Broos of the University of Glasgow; Carlos Tello and William Valderrama of the Association for the Conservation and Development of Natural Resources in Lima, Peru; and Sergio Recuenco of the Ministry of Health of Peru. Additional funding came from the Pan American Health Organization and a Sir Henry Dale Fellowship to Daniel Streicker, jointly funded by the Wellcome Trust and the Royal Society. Further support came from the Peruvian government and the University of Georgia.