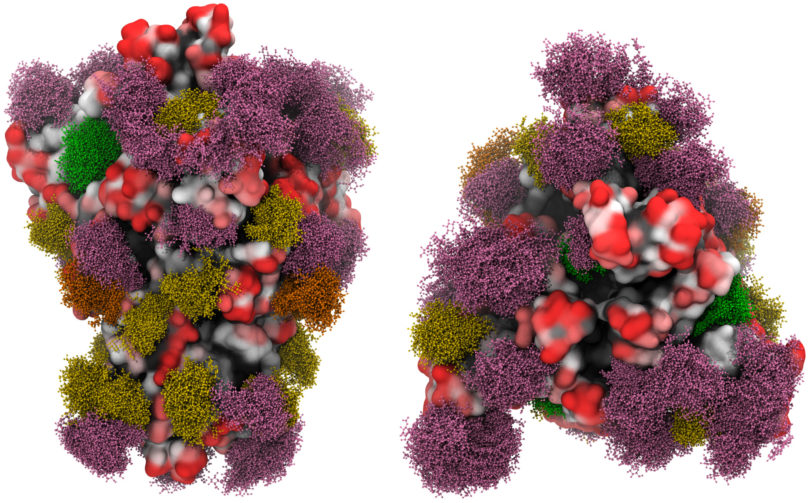 Rob Woods and Parastoo Azadi are investigating the proteins and sugars on the surface of the COVID-19 virus with the goal of finding information that could lead to vaccines and therapeutics. (Submitted photo.)

UGA CCRC researchers looking at how it infects human cells

The virus that causes COVID-19 is studded on its exterior with “spike proteins,” a key component in its ability to infect human cells. Two University of Georgia researchers, Rob Woods and Parastoo Azadi, are investigating the proteins and sugars on the surface of the virus with the goal of finding information that could lead to vaccines and therapeutics.

Woods and Azadi are scientists at UGA’s Complex Carbohydrate Research Center, where researchers study the structures and functions of the complex carbohydrates of microbes, plants and animals to determine the role of carbohydrates in growth and development, host-pathogen interactions, and disease processes.

SARS-CoV-2 is the virus that causes COVID-19, and its spike proteins latch onto cells and force the virus through the cell membrane. The human immune system detects foreign proteins, like the spike protein, by recognizing amino acid sequences that are present, according to Woods.

“But if a pathogen puts a sugar on the protein’s surface, it can mask the amino acids,” he said. “One sugar can mask a whole cluster of amino acids so our antibodies can’t see them. Many viruses do this—influenza and hepatitis C, for example.”

Woods and his team have modeled the 3D structure of the SARS-CoV-2 spike protein and its attached sugars. As shown in an illustration they produced, the protein is a smooth surface shielded by sugars that move like trees in the wind. That makes it harder for the human immune system to find the target—the protein’s surface.

“I always use the analogy of glycans as trees in the wind. Some of them are floppy, and some of them are more stiff,” he said. “We’re looking for ones that we can get under or around.”

The process of how glycans are attached to—and shield—protein surfaces is called glycosylation.

“This is what our group specializes in,” Woods said. “We develop methods for predicting how glycans move and are attached to protein surfaces.”

The team had been working on other viruses, particularly influenza, before the spread of COVID-19. The systems are biologically different, but from a structural perspective the modeling is similar, making for an easy transition. But glycosylation is a complicated target since there’s no uniformity in terms of which sugars are used and where they’re placed.

In order to model the structure of the spike protein, Woods and his team used the Cryo-EM model published in March by a team from China. A week later, a glycomics study showed probable sugar structures and locations on the protein’s surface, helping them to determine which sugars to put at each site. The model they generated shows to what extent the binding site and other regions might be exposed—information that helps illustrate what a vaccine might need to look like.

“Many people who are not familiar with glycoscience think in terms of the protein as being just a protein, not the fact that the surface is covered with sugars. That gives them a false idea of what is really accessible to the immune system,” he said. “By considering the sugars, you have an idea of just how much of the protein is hidden from our immune system. When designing a vaccine, you want the vaccine to generate antibodies that recognize the parts of the protein that it can bind to, that the antibodies can attack. By seeing where the sugars are, you can make decisions about how you’re going to make a vaccine to target the areas that are exposed and not shielded by the sugars.”

Woods and his team were one of the earliest groups to model glycoproteins.

“After all these years of looking at carbohydrates, it really puts us in the right position at the right time, with the right knowledge base, to do this,” he said. “It’s very exciting for me to be at a point where we can use our tools to do something so timely.”

Mapping glycosylation on the spike protein

Like Woods, Parastoo Azadi’s previous research—characterizing glycosylation of vaccine candidates for viruses including influenza and HIV—made for a straightforward transition to working on the SARS-CoV-2 spike protein. But unlike Woods, she takes an experimental approach.

She and her team are using high throughput mass spectrometry techniques to characterize specific types of glycosylation on the spike protein, which facilitates viral attachment and plays a critical role in eliciting a host immune response. Their results have shown for the first time the presence of unexpected O-glycosylation (the attachment of a sugar molecule to an oxygen atom) on the spike protein. Since glycosylation plays a key role in viral binding, characterizing it can help in the design of a vaccine for COVID-19.

“Understanding glycosylation at the binding site can guide the design of vaccines,” said Azadi, senior research scientist and technical director of Analytical Services & Training at CCRC. “Only a vaccine that can mimic the viral protein as closely as possible can elicit an optimal immune response.”

The team’s paper, “Deducing the N- and O- glycosylation profile of the spike protein of novel coronavirus SARS-CoV-2,” is published online with the preprint service bioRxiv and has been accepted by the journal Glycobiology. Co-authors include Asif Shajahan, Nitin T. Supekar and Anne S.  Gleinich, who are part of the analytical team at the CCRC.

“As part of the biomedical research community, we are extremely committed to tackling one of the most critical emergencies of the modern era,” Azadi said. “All these years of serving as a resource to the scientific community helped us step up to the plate and quickly contribute to the development of therapeutic interventions against COVID-19.”