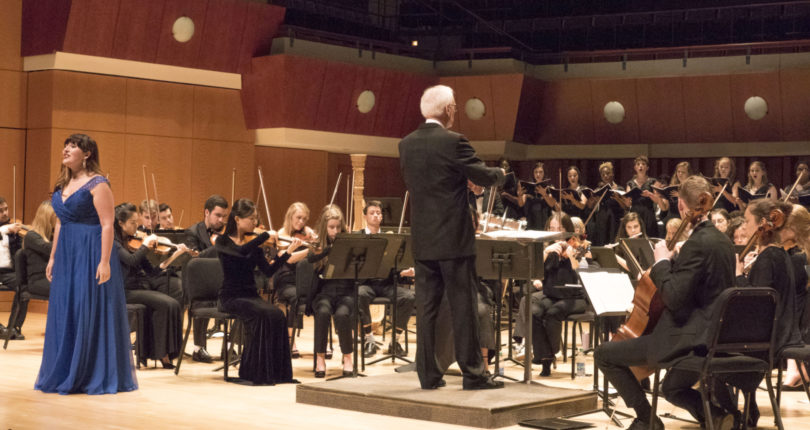 The final large ensemble concert will take place on April 25 at 7:30 p.m. in Hodgson Hall. The showcase will include the University of Georgia Symphony Orchestra, Hodgson Singers, Men’s and Women’s Glee Clubs and University Chorus.

The program will open with Chopin’s “Concerto for Piano No 1 in E minor, opus 11” and will feature Liza Stepanova, piano faculty member. Stepanova has been hailed by the New York Times for her “thoughtful musicality,” which will be heard in Chopin’s work, the theme of which reflects Stepanova’s own ambition and diligence in academia and music.

Under the baton of Mark Cedel, UGA Symphony Orchestra members will perform Chopin’s work, which was scored for two flutes, two oboes, two clarinets, two bassoons, four horns, two trumpets, trombone, timpani and strings. In the second part of the performance, the ensembles will perform a piece for symphony and chorus by Rachmaninov.

“A highlight of the concert will be a performance of Rachmaninov’s symphony with chorus, The Bells,” Cedel said.

Following the traditional movement format for symphonies, the piece is comprised of four movements, with each movement dealing with a different type of bell. Rachmaninov chose poetry from Edgar Allen Poe to depict the bells in each movement. The work will be sung in English.

“It’s a wonderful and exciting work. And it wouldn’t be Rachmaninov if he didn’t slip in a ‘Dies Irae’ quote,” Cedel said.

Joining the UGASO will be the Men’s and Women’s Glee Clubs and the University Chorus, under the baton of J.D. Burnett, as well as the Hodgson Singers directed by Daniel Bara, John D. Boyd UGA Foundation Professor of Choral Music. Graduate performance students Jaralane Davis and Isaiah Feken will take on the soprano and baritone solo parts of the piece. Soloing as tenor will be Gregory S. Broughton, associate professor of music and chair of the voice area.

Tickets are $12 for adults and $6 for students and children. They can be purchased online at pac.uga.edu or by phone at 706-542-4400. Proceeds from contributions and ticket sales to these concerts are among the primary means through which School of Music scholarship funds are raised each year. For those unable to attend, the concert will be streamed at music.uga.edu/live-streaming.

This concert marks the end of the 2018-2019 Scholarship Series season. Subscription sales for the 2019-2020 season will begin in June. Updates will be posted at music.uga.edu and on social media.