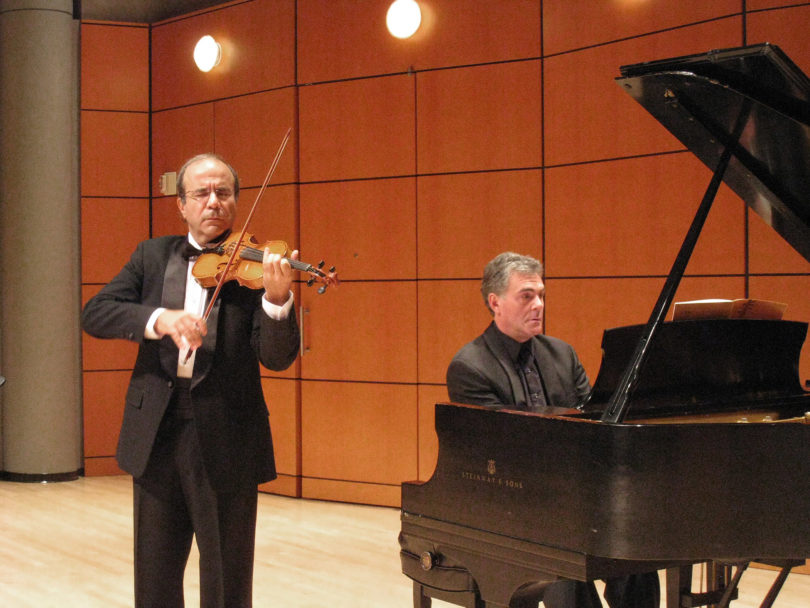 The concert, which will be held Oct. 8 at 7:30 p.m. in Hugh Hodgson Concert Hall at the Performing Arts Center, will see Ambartsumian, Regents and Franklin Professor of Violin, and Rivkin, a professor of piano, returning to the piece that introduced them to UGA.

“In October 1995, we performed this All-Brahms program as our first-ever recital at UGA, recorded it shortly after in Hugh Hodgson Hall and released it under the ACA recording label,” Ambartsumian and Rivkin wrote in the program notes for this performance. “We have not played this program since that time and now, after 20 years, have decided to conquer it again.”

Ambartsumian said that those 20 years of concertizing and teaching come through in the music, altering their understanding and performance of the pieces.

“Actually, (Dr. Rivkin) asked me, when I proposed playing this program, ‘Do you think we have something new to say in this music?’ ” Ambartsumian said. “I said, ‘I don’t know about that, but because we’re 20 years older, whatever we say—even with the same music—will be different.’ “

The sonatas themselves highlight different periods in Brahms’s musical development and how his approach to music changed over time. However, a basis on vocal melodies, song-like structures, ties together each piece, though each sonata employs this in different ways.

The concert is part of a tour of sorts, as Ambartsumian and Rivkin are also playing the program at Agnes Scott College in Decatur and Francis Marion University in Florence, South Carolina. The duo also will travel to Russia in November to play the program.