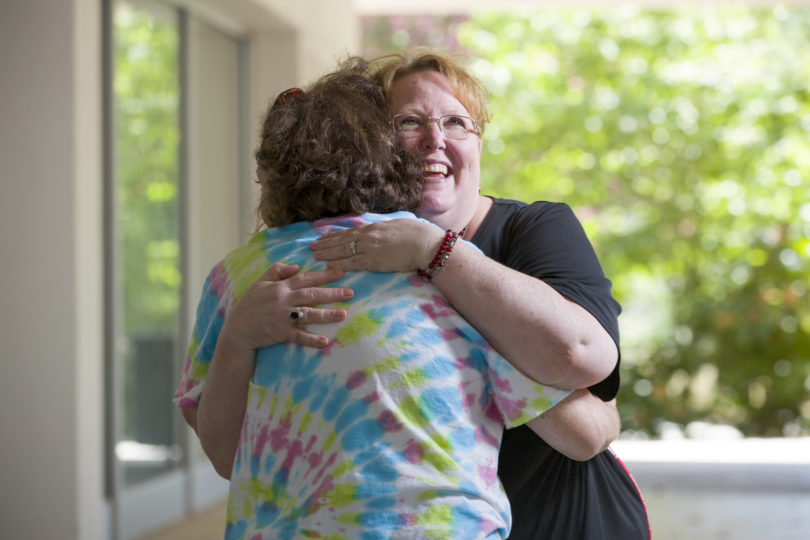 When Donella Moore graduated from the Art Institute of Atlanta with a degree in interior design, never did she think that she’d become an accountant. Yet, two decades later, Moore isn’t working in interior design professionally. Instead, she is a senior accountant for the University of Georgia’s College of Pharmacy.

“It’s funny,” she said, “I always look back and wonder how this happened.” 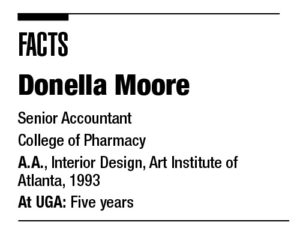 Moore’s career path has been an unconventional one. Unlike many accountants, she doesn’t hold a certified public accountant license and did not study the subject in college.

“Everything I learned about accounting was through trade and my own work experience,” she said. “I’ve been working with numbers for over 25 years. I love the problem solving that goes into it.”

While attending the Art Institute of Atlanta, Moore worked at Stone Mountain Park in a variety of jobs, including handling the park’s payroll. Following graduation, Moore married Claude, an Atlanta police officer, in 1993. While she enjoyed interior design, she found that making a career in the field would be impractical. Instead, Moore began building on the experience she received at Stone Mountain Park.

Throughout the years, Moore worked a variety of administrative jobs before coming to UGA. She was an executive administrative assistant at Alltel Communications and a contract administrator for a building company, Damascus Homes.

“I always wanted to work at UGA,” she said. “I kept running into people who worked there and asking them how they got a job there.”

Over the course of a year, Moore applied for about 20 UGA jobs that didn’t require any previous university experience. In July 2012, she got her first job at the university, running the front office for what is now the Georgia Genomics and Bioinformatics Core. Over the next few years, Moore worked in a few university departments in administrative roles, gaining experience in an academic setting. She was hired as an associate accountant in the College of Pharmacy in August 2015 before being promoted to senior accountant in March 2017.

Moore has enjoyed her time at the college working with what she refers to as the “Pharm Family.”

“I love the College of Pharmacy,” she said. “We do everything in the college as a team.”

During her time at the college, Moore has received a number of honors from her co-workers. In April, she was the recipient of the college’s quarterly STAR Award, which is given to staff members who go beyond the required duties of their work.

Last year, Moore was elected president of the Pharmacy Staff Resource Group. In this position, she organized any necessary training, planned group events and organized educational lunches for her co-workers.

Outside work, Moore enjoys spending time with her husband and two daughters, Megan and Chloe, while pursuing her artistic passions, including sewing and interior design. Chloe is a freshman at Athens Christian School and involved with the school’s dramatic productions. For the past three years, Moore has put her sewing skills to use and helped make costumes for the school’s plays. She’s worked on The Wizard of Oz, Beauty and the Beast and Music Man. Currently she’s hard at work making costumes for the production of Aladdin.

While it’s not where she thought she would end up 25 years ago, Moore is very happy with her work at UGA, and said she wouldn’t change a thing.

“I have about 15 to 20 years until I retire. I will not leave the College of Pharmacy,” she said. “My job will always be here.”