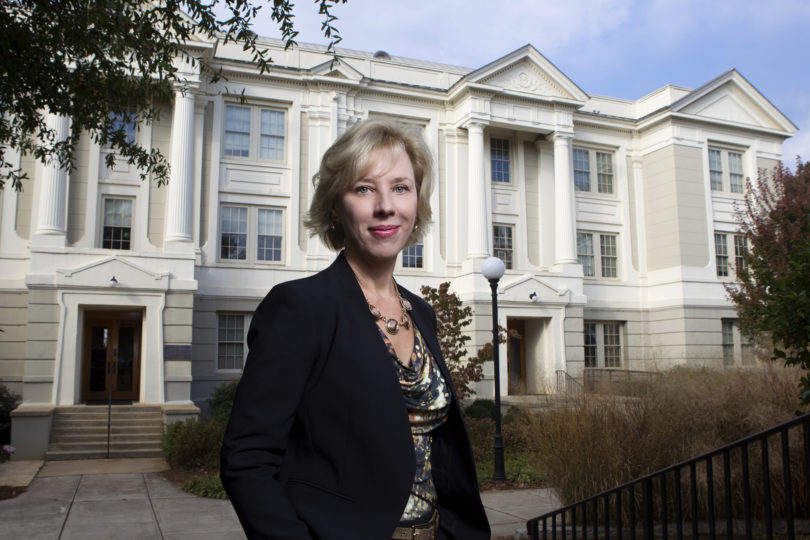 Stefanie A. Lindquist, the new dean of the School of Public and International Affairs, said she is proud to work for a school with such a distinguished faculty, impressive students and accomplished alumni.

Lindquist’s job, as she sees it, will be to make sure those assets are well publicized in Georgia, Washington, D.C., and around the world.

In other words, the dean’s focus is to articulate the school’s brand and spread the message.

“SPIA’s reputation is strong because we are able to catapult our bright students into positions of influence in government, nonprofits, academia and business,” she said.

Even before starting the job as SPIA dean this fall—succeeding the school’s inaugural Dean Thomas P. Lauth—Lindquist already was well aware of the school’s accomplishments.

Lindquist began her career as a faculty member at UGA in 1996, specializing in political science and law. She was mentored by Susette Talarico, the Albert Berry Saye Professor of American Government and Constitutional Law emerita who died in 2007.

In Lindquist’s first stint at UGA, she was a 2002 recipient of the Richard B. Russell Award for Excellence in Undergraduate Teaching, UGA’s highest early-career teaching honor.

She left UGA to serve as an associate political science and law professor at Vanderbilt University and eventually interim dean and associate dean of academic and then external affairs at the University of Texas School of Law.

In August, Lindquist returned to Athens, bringing with her a diversity of academic experience.

“I was drawn back here by my love of UGA,” she said. “I also was impressed with the way SPIA had grown since the time I had left. I consider it a rare opportunity to return to a place I knew so well and appreciated so much.”

In the beginning stages of her deanship, Lindquist is focused on opportunities for branding and fundraising, which means elevating the school’s reputation in national and international circles.

“Public affairs education is a very competitive business,” she said.

Fortunately, Lindquist said, SPIA already has a lot to showcase. The school’s success, she said, starts with its faculty, who are noteworthy in terms of their teaching and their research.

“Our research is wide-ranging and in some cases influences policymakers,” Lindquist said.

The prolific and influential work by faculty, the dean said, is the reason why the SPIA master of public administration program is ranked fourth best in the nation by U.S. News & World Report.

SPIA’s students also are showing leadership in part through a commitment to public service in Athens. For example, Tommy Valentine, a first-year MPA student, worked with Athens-Clarke County Mayor Nancy Denson this year to initiate the Mayor’s Call to Service. This initiative to encourage local volunteerism highlights local nonprofit organizations and volunteers through short videos.

International affairs’ study abroad programs also incorporate public service into their curricula, such as with the program in Stellenbosch, South Africa. As part of this program, students participate in a two-week service-learning project in the nearby community of Kayamandi.

But the biggest public service impact for SPIA is the quality of public servants who come out of the school’s programs, Lindquist said.

“Our graduates often go into the public sector and have jobs working on Capitol Hill and in Atlanta with legislators as well as in nonprofit organizations helping move policy forward,” she said. “Capitol Hill is bursting at the seams with our graduates working as legislative aides, in federal agencies and in lobbying firms.”

To leverage those accomplishments through fundraising, Lindquist said, a faculty-led council currently is undergoing a strategic planning exercise for SPIA. The group is looking to make sure the school is highlighting its core strengths so prospective philanthropists will know they’ll be “getting a strong return on their investment,” Lindquist said.

In addition, SPIA is in the process of updating its website (spia.uga.edu) and social media presence, the dean said, to show its best, most technologically advanced, face to the world.

As SPIA emphasizes it brand and makes itself better known to the world, Lindquist said, the school is even better prepared to fulfill its mission.

“We really view our mission as shaping tomorrow’s leaders in the public and private sectors,” she said.