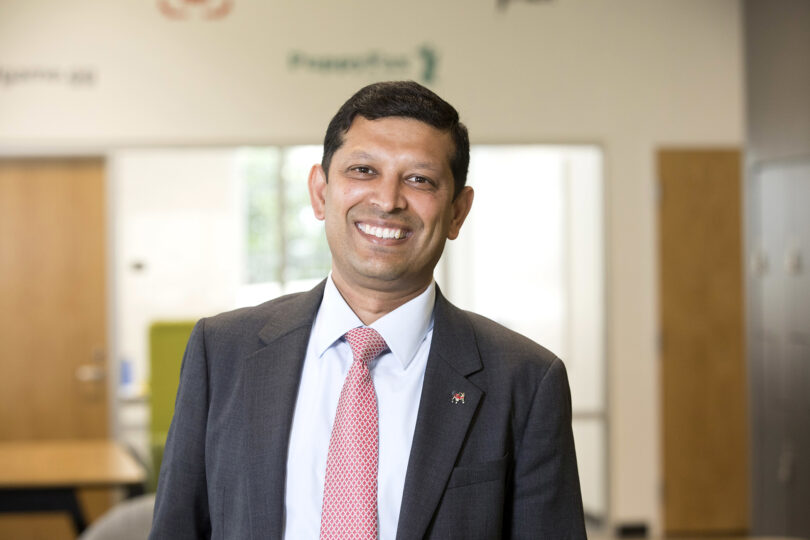 Rahul Shrivastav, vice president for instruction and a prominent researcher in the field of assistive communication technology and speech sciences, has been elected as a Fellow of the National Academy of Inventors. He is the ninth University of Georgia faculty member elected as an NAI Fellow, all of whom have been elected in the past seven years.

The holder of nine U.S. patents, Shrivastav was co-founder of Audigence, Inc., which provided technological solutions for evaluating hearing aid performance and secured more than $3.5 million through private investments and grants before its technology was licensed to the world’s leading manufacturer of cochlear implants in 2012. He created the company while serving as director of the University of Florida’s Voice Acoustics and Perception Laboratory, before continuing his research at Michigan State University as professor and chair of its department of communicative sciences and disorders.

It’s humbling to be in the company of some of the best-known innovators and inventors and top scientists, people who’ve done work that’s having a real, meaningful impact on the ground today.” — Rahul Shrivastav

Election to NAI Fellow is the highest professional distinction accorded solely to academic inventors. The Fellows program highlights academic inventors who have demonstrated a spirit of innovation in creating or facilitating outstanding inventions that have made a tangible impact on quality of life, economic development and the welfare of society. To date, NAI Fellows hold more than 38,000 issued U.S. patents, which the NAI says have generated more than 13,000 licensed technologies, and created 2,300 companies and more than 19.5 million jobs. According to NAI, $2.2 trillion in revenue has been generated based on NAI Fellow discoveries.

“It’s humbling to be in the company of some of the best-known innovators and inventors and top scientists, people who’ve done work that’s having a real, meaningful impact on the ground today,” Shrivastav said. “It’s a tremendous honor to be recognized as a part of that community.”

Since arriving at UGA, Shrivastav has had fewer opportunities to spend time in labs, but he maintains active projects with colleagues at University of South Florida, Medical University of South Carolina and Cincinnati Children’s Hospital Medical Center. He also collaborates with venture partners in Europe and Canada.

The science of speech patterns

Shrivastav is part of an active NIH SBIR Phase II grant that supports development of a technology that would allow users to “self-fit” for a new hearing aid, and he’s involved in another project that seeks to use automated analysis of speech patterns—collected, for example, through voice-activated devices like Amazon Echo or Google Home—to diagnose early-onset of Parkinson’s disease and other neurological disorders.

“In addition to fulfilling his responsibilities as vice president for instruction, Dr. Shrivastav continues to advance research and innovation that improves lives and brings distinction to the University of Georgia,” said S. Jack Hu, UGA’s senior vice president for academic affairs and provost.

As vice president for instruction, Shrivastav was part of the task force that recommended creation of UGA’s Innovation District. The Office of Instruction now plays a critical role in engaging students with this university-wide initiative to grow UGA’s innovation ecosystem. “Strengthening connections to industry and having a direct impact on society at large,” Shrivastav said, “is an imperative not just for UGA but for all research universities.

“Virtually every major, impactful discovery or advance in science and innovation is now happening at the margins of traditional academic disciplines,” he said. “My research is a mix of basic science, engineering, clinical practice, and technology integration—it’s merging advances in all these areas to solve a problem. Our vision for the Innovation District is for it to provide the physical and organizational structure that encourages people to work outside their traditional disciplinary boundaries.”

Shrivastav is part of a 2020 NAI Fellow class that represents 115 research universities and governmental and nonprofit research institutes worldwide and collectively holds more than 4,700 issued U.S. patents. Among the 2020 Fellows are members of the National Academies of Sciences, Engineering and Medicine, and the American Academy of Arts & Sciences, as well as a Nobel Prize laureate. Their collective body of research covers a range of scientific disciplines including biomedical engineering, computer engineering, materials science and physics.

“Rahul’s experience and success in technology commercialization have made him an invaluable partner in shaping our Innovation District,” said David Lee, vice president for research. “He’s not only an accomplished inventor himself, he’s also a passionate advocate for experiential learning opportunities that imbue our students with a spirit of inquiry and innovation.  I congratulate him on this well-deserved honor.”

Shrivastav will be formally inducted at a ceremony that’s part of NAI’s annual meeting, scheduled for June 7-9, 2021, in Tampa, Florida. A complete list of Fellows is available on the NAI website.