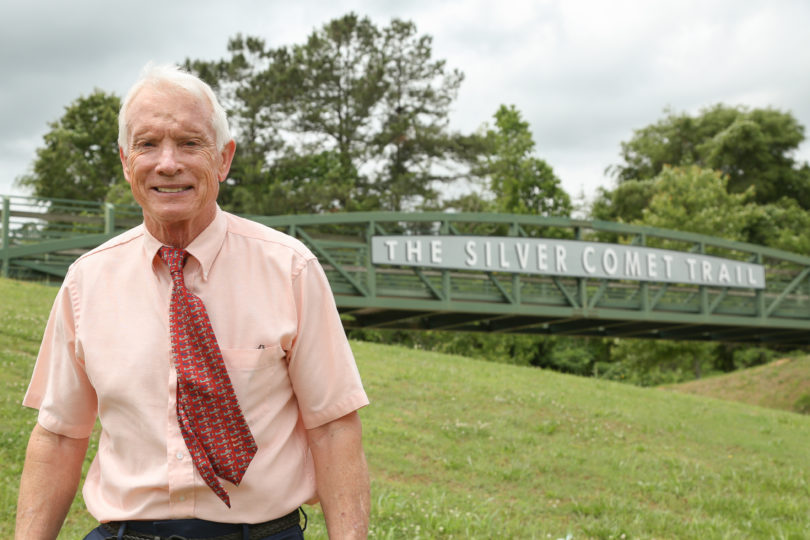 During fiscal year 2017, the Carl Vinson Institute of Government offered 64 six-hour courses to county officials in partnership with ACCG and its Lifelong Learning Academy, with more than 1,800 participants from across the state. Photo credit: Shannah Montgomery

More than 600,000 cyclists and walkers pass through Paulding County each year on the Silver Comet Trail, a 61.5-mile paved, non-motorist path that runs from Smyrna into Alabama.

In Dallas, the Paulding County seat, visitors cross the Pumpkinvine Trestle, a 117-year-old railroad trestle, 126-feet above Pumpkinvine Creek, which was converted into part of the trail in 2000.

With assistance from the University of Georgia’s Carl Vinson Institute of Government, Paulding County officials have turned the trail into the centerpiece of a marketing campaign designed to draw tourists to the west Georgia county.

Commission Chairman Dave Carmichael first got to know about the Carl Vinson Institute of Government and the wealth of training programs and services it offers during newly-elected officials training with the Association County Commissioners of Georgia in 2012, when he was first elected as a county commissioner. He was elected commission chair four years later.

Like so many other government officials in Georgia, Carmichael has returned to the  Institute of Government time and again for programs that help him be a more effective leader. He has completed  over 100 hours of training through more than a dozen courses in such areas as county government law, economic development, ethics, human resources, property appraisal and taxation, and public health and safety.

At any given time, institute faculty are heading in all directions, helping facilitate strategic plans, studying city-county consolidations, helping communities restore their downtown business districts and training elected officials throughout the state in economic development, city and county management, finance, human resources, education and workforce development and much more.

During fiscal year 2017, the Carl Vinson Institute of Government offered 64 six-hour courses to county officials in partnership with ACCG and its Lifelong Learning Academy, with more than 1,800 participants from across the state.

“Communities across the state look to the Institute of Government and UGA as a whole to help them develop the knowledge and skills needed to grow and thrive,” said Jennifer Frum, UGA vice president for Public Service and Outreach. “As the land-grant and sea-grant institution, it’s our responsibility to help all Georgians prosper.”

During the Paulding County strategic planning sessions, Institute of Government public service associates Phil Boyle and Mara Shaw brought together county commissioners, educators, business people and municipal leaders to hone in on the assets the county could use to diversify and bolster  the local economy. Marketing the county as a tourist destination emerged as a top priority.

With UGA’s help, Paulding County is now looking at ways to capitalize on the Silver Comet Trail, as well as other historical, recreational and cultural sites in the county, including a watershed featuring 43 species of fish, well-preserved civil war battlefields and a wildlife management area perfect for hunting, fishing and hiking.

“I think it’s invaluable to get everyone together and have them be honest about where they see us going,” Carmichael said. “Phil and Mara are pros and know how to bring out honest responses from people. Our tax base isn’t diverse enough, and they were able to show us some practical things we could do.”

“Helping local governments explore ways to engage in creative approaches to their critical challenges is at the heart of all we do,” said Laura Meadows, director of the Institute of Government. “The local level is where we can really see meaningful change and growth happen. Much of the progress we see as a state stems from progress made first in Georgia’s local governments, whether large or small.”

Commissioner Ron Davis, who was first elected to office in March 2016, said the strategic planning sessions helped everyone get a chance to be heard and realize where they had common ground. Like most local governments, discussion at commission meetings can be emotional, he said, but the conversation at these planning sessions was about charting a future course for the entire county. Creating new economic opportunities through tourism was something they all could get on board with.

“We all agreed on the direction we needed to go, which is a pretty significant feat,” Davis said. “I really enjoyed having the Carl Vinson Institute come in and work through that and the expertise that they brought to the table. It was almost like a counseling session. I thought, ‘This is good. We can go somewhere with this.’ ”

And they are. County administrator Frank Baker is spearheading the next steps as head of a task force created as a result of the facilitated planning sessions. His group is discussing improved signage, enhancing existing trailheads and adding new trailheads along the Silver Comet.

“We have so many natural draws here,” he said. “Part of the outcome of those sessions was really thinking about what we have to offer and how to move that forward. The Carl Vinson Institute was instrumental in getting us laser-focused on tourism. Some really, really good stuff is coming out of that.”