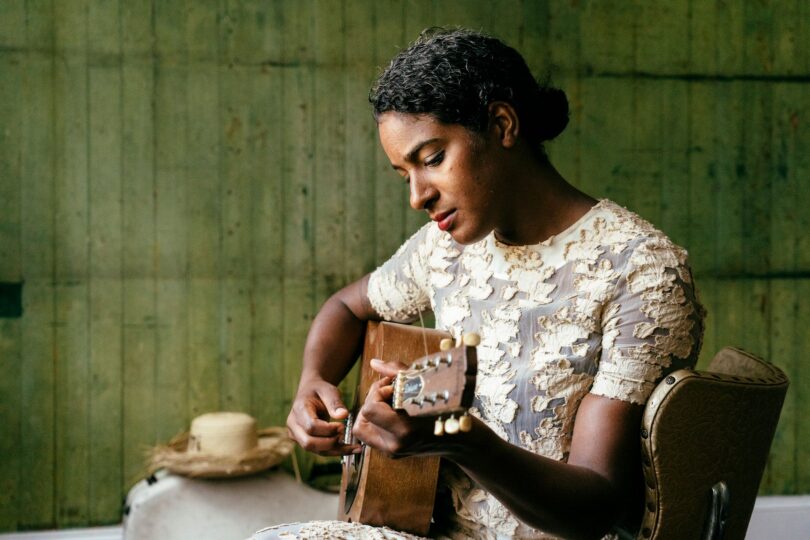 For many people in the U.S., radio is light entertainment, even background noise. But in countries with fewer resources, radio can be a lifeline, a beacon that builds community.

“Breaking the Thermometer to Hide the Fever” is a multidisciplinary work by Leyla McCalla, a singer-songwriter and former member of the Grammy-winning Carolina Chocolate Drops. In it, she explores the history and influence of Radio Haiti, the first private Creole-language station in her parents’ native country.

McCalla will perform excerpts from this piece in her appearance Jan. 18 at 7:30 p.m. in the UGA Performing Arts Center’s Ramsey Concert Hall. She will also play a Piedmont Athens Regional Performance for Young People at 10 a.m. and give a free pre-performance talk in Hodgson Concert Hall at 6:45 p.m. On Jan. 17, she will host a free workshop open to the general public from 11:15 a.m. to 12:15 p.m. in Ramsey Concert Hall.

“The more I researched this project, the more I found myself examining my own sense of Haitian-ness,” McCalla said. “I spent a lot of time recalling my experiences visiting Haiti as a child, thinking deeply about the moments in my life when I felt very Haitian and the moments when I didn’t. In the end, the music and the stories here all brought me to a more nuanced understanding of both the country and myself.

“Haiti’s always seen as this faraway place,” she said, “but we’re far more connected as Americans than we realize. Haiti was the first independent Black nation in the Western Hemisphere. Its very existence was and remains a threat to Colonial power. At the same time, though, it symbolizes a lot about injustice and oppression around the world. When we talk about ‘Black Lives Matter,’ Haiti is a huge part of that.”

Born in New York City to a pair of Haitian emigrants and activists, McCalla developed an early fascination with the country and its culture. After moving to Ghana for two years and later graduating from NYU, McCalla eventually drifted south to New Orleans, where she planned to make a living playing cello on the streets of the French Quarter.

“At the time, I didn’t realize how deep the Haitian roots of New Orleans ran,” she said, “but I very quickly found myself diving into all the cultural and historical connections. And then once I picked up the tenor banjo, I started researching Haitian folk songs, as well, and I was amazed to discover this incredibly rich banjo tradition, which led me to travel back to Haiti again.”